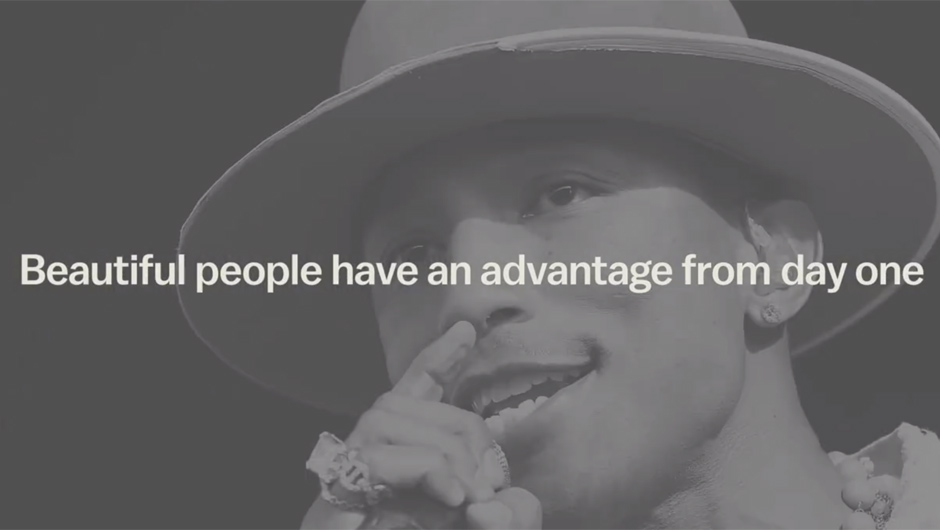 Ezra Klein posted a video to his Facebook this week called The Economic Benefits of Being Beautiful. Klein didn't make the video himself, it's actually credited to two directors named Joss Fong and Joe Posner, and when I watched it I felt like something was wrong.

I had a professor in college who always told me that in those situations you have to stop and ask yourself: “What bothers me about this?” It's the first question you have to ask in a long series of questions regarding the validity of an argument, how it's argued, and what the hell is actually being said.

According to the video, beautiful people have an advantage from day one:

So, what bothers me about this video? Well, the first thing that sticks out to me is that it's entirely based on logical fallacy. For example, you can't correlate stuff like how much money NFL quarterbacks get with how attractive they are. There are so many factors that go into determining a player's salary, like the franchise cap and what other superstar players are on the team.

In the world of logic, the fallacy present in each of these 14 bullet points is called correlation proving causation. That is, it's a faulty assumption that correlation between two variables implies that one causes the other: post hoc ergo propter hoc. You might also say that this video contains a fallacy of the single cause, an assumption that there is only one, simple cause of an outcome when in reality it may have been caused by a number of only jointly sufficient causes. That is, Fong and Posner assert that being attractive leads to more money and a happier life when in reality it could be any number of things.

What they completely ignore here is the age old question of nature versus nurture. You're either born hot or you're born ugly. For Fong and Posner, with this line of logic, it's impossible to ever be successful if you're unlucky enough to be born ugly.

What about all the people who are taught, or nurtured, to be attractive though? Being nice, moral, ethical, and supportive are all attractive qualities, and those are things that are imprinted on humans from their ecosystem. Regardless, I don't think the nature versus nurture argument is nearly as important as what determines attractiveness. Isn't it an inherently subjective thing? There's an old anecdote here that I think is applicable: one person's trash is another person's treasure.

Is it any coincidence that what people found attractive in the 1950s isn't deemed attractive by today's standards? No, it's not. That's because societal standards change and evolve over time, thus showing that our definitions of what constitute attractiveness are not, in fact, static. I would even go so far as to say there is no set standard for attractiveness.

You can be a physically ugly person, but you can still win the hearts of entire nations because you have a beautiful personality, a fierce intellect, or talents beyond imagine. If you don't believe me, I'd say look no further than certain cast members of American Horror Story Freak Show, Stephen Hawking, and Susan Boyle. Without a doubt, these are attractive people.