Working in the education field for years in the Chicago area, Jeff O'Hara got frustrated seeing that social networking and sharing sites were blocked in the classroom. This did not seem right to Jeff as he thought that education was the ideal place for social collaboration. So Jeff decided he was going to do something about it and teamed up with developer Nic Borg to co-found Edmodo, which brings a social sharing and collaboration platform to the education space.

We got to know Jeff and Nic since we starting hosting Tech Cocktail events in 2006. I think Jeff may have attended every one for the first 3 years. We first covered Edmodo as they rolled into beta back in 2008.  Two months later Edmodo came out of beta with its public offering at one of our Tech Cocktail Chicago mixer events in May of 2008. We've been following along with Edmodo ever since they embarked on their entrepreneurial journey. Over the past two years, Jeff, Nic and team have been splitting time between Chicago and Silicon Valley as they continued to improve the product and grow the user-base. Check out Edmodo's growth according to Quantcast. 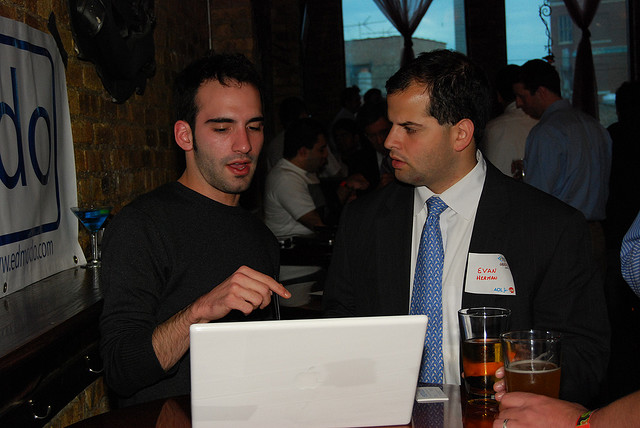 This past week Jeff reached out with some exciting news. Not only was Edomodo turning 2 but it also had just reached one million users which is not a small feat by any means. But to add to it, he also shared that Edomodo had been funded by Union Square Ventures, another significant achievement. On a post by Union Square Ventures they had this to say about Edmodo:

“The team at Edmodo shares these beliefs, and we are super excited to be working with them as investors. Edmodo is based on the premise that teachers need an easy way to share content with their students. Around this central concept, Edmodo has created a social and mobile experience that appears to be resonating well with teachers and students. The team at Edmodo, existing investor Learn Capital, and we are committed to supporting the learning community in schools across the country and the world.”

We are happy to see Edmodo doing so well and to have a front row seat to watch as they've grown from just an idea that was being kicked around at one of our Tech Cocktail Chicago mixer events to a 1 million-strong user platform that is changing the educational landscape.