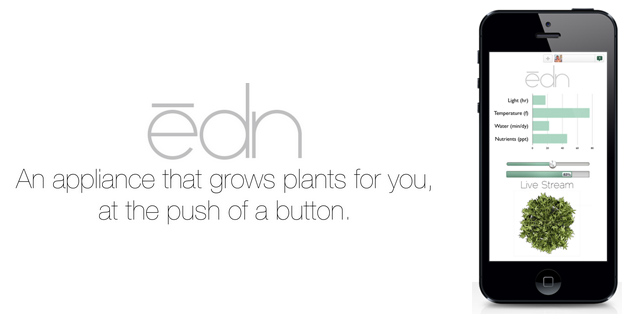 I came across a Kickstarter campaign recently by a Denver-based startup Edn, short for Environmental Data Network. What caught my attention was not the fact that the founders, Lucas Powell and Ryan Woltz, were diving head first into the cannabis-tech industry, but rather the fact that they were some of the first engineers I've seen do it.

They're pitching their Kickstarter campaign, Grow the Greenest Green, on the vision to use cannabis as a springboard to eliminate barriers to entry for non-growers and ultimately launch into the consumer and restaurant markets. What do they make, exactly? The duo has built a fully automated grow box, and the applications extend far beyond the realm of cannabis.

Long time friends, the pair went to Clemson University where together where they were completing degrees in Civil Engineering. Each had their own hobbies and interests on the side, Powell diving into entrepreneurship while Woltz acclimated himself to the realm of horticulture.

Upon graduation, Woltz began messing around with automated growing systems using the Arduino computer chip to control different aspects of the operation. Then one day he asked Powell if he could help him with some of the programming aspects. So, the duo began collaborating and building the first iteration of their automated growing system.

“We got real serious about this real fast and wanted to give it a shot,” says Powell. “We successfully designed and built an automated hydroponics system.”

Being of sound entrepreneurship mind, Powell began analyzing emerging markets they might get find a home in. They settled on the cannabis-tech market, and decided to build out their Kickstarter campaign in a twofold nature. On one hand they had the growing system, and on the other they would offer online courses for how to “Grow the Greenest Green”.

“We wanted to target the average cannabis user who doesn’t know about computers or growing plants,” says Powell.

The entire process is fully automated, utilizing the power of the Arduino to control the lighting and watering schedule. The tiny computer can also control the LED lights in the system so users have complete control over the light spectrum, atmospheric conditions, and plant nutrients.

Growing a plant itself isn’t that difficult, but growing a plant that produces a good yield is an entirely different story. When dealing with cannabis the grower wants to aim for a healthy, female plant because males, instead of producing THC buds, produce pollen sacks to breed with the female plant.

For example, if the cannabis plant feels stress, it will do crazy things. It might wilt, die, or even turn into a hermaphrodite and pollinate itself. All of these scenarios have the same end result: a poor yield.

Educating people about how to properly grow is the first step, and the second step is to establish a foothold in the industry. Ultimately Powell and Woltz want to leverage their Kickstarter campaign and online course offerings to build a solid customer base and pursue larger industry partners.

“Right now in the cannabis industry, one thing we noticed is there aren’t a lot of engineers,” says Powell. “We bring some unique aspects to the table, and that’s our differentiating factor. You can find books online, or websites, but none do what we do with the automation and incorporating the IoT [Internet of Things] movement into cannabis.”

The duo has absolutely felt their fair share of frustration getting started up. They’re a very early-stage company, but the long term vision is to bring in an Internet of Things (IoT) angle to their company and target both tech and cannabis users.

Even when not fully perfected, their Arduino-powered system can actually link up with your smartphone to show you the feed from the live camera in the system, or let you know if atmospheric conditions aren’t up to snuff. The dream is for Powell and Woltz to create an open sourced cannabis growing platform where people can share different watering programs, growing conditions, and schematics for build layouts.

“There’s going to be a domino effect with this market as the legislation keeps moving forward,” says Powell.

If there’s one thing experienced growers can agree on, it’s that quantified data on nearly every aspect of the growing process is incredibly useful. This is what you get when you add engineers to an industry in need of their prowess.