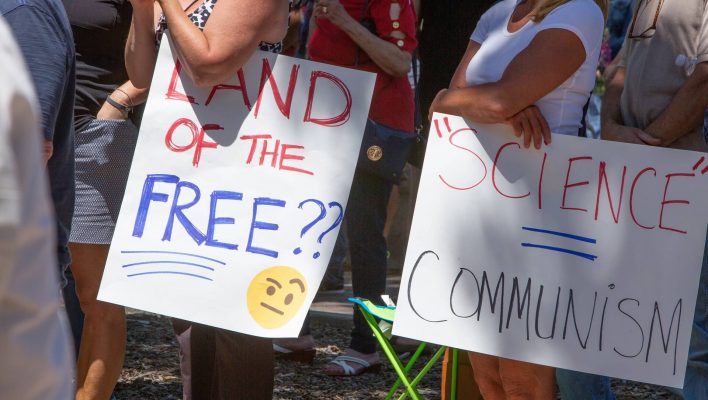 The arrival of Covid-19 late last year has led to a super-spreader event of misinformation online, with fake news about the coronavirus surging amid the pandemic.

In April this year, the CoronaVirusFact Alliance database recorded nearly 4,000 Coronavirus-related hoaxes circulating around the world. In the UK, a study by telecoms regulator Ofcom suggested that 46% of adults on the internet saw false or misleading information about Covid-19 in the first week alone of the country’s lockdown.

To get a clearer picture on what some are already coining “the infodemic,” we’ve taken a look at just how much fake news has increased during the pandemic, why it’s happening, and what platforms can do to prevent it.

A study, carried out by the German Marshall Fund found that engagement with articles from notoriously misleading outlets has increased by 102% since the run-up to the 2016 election. 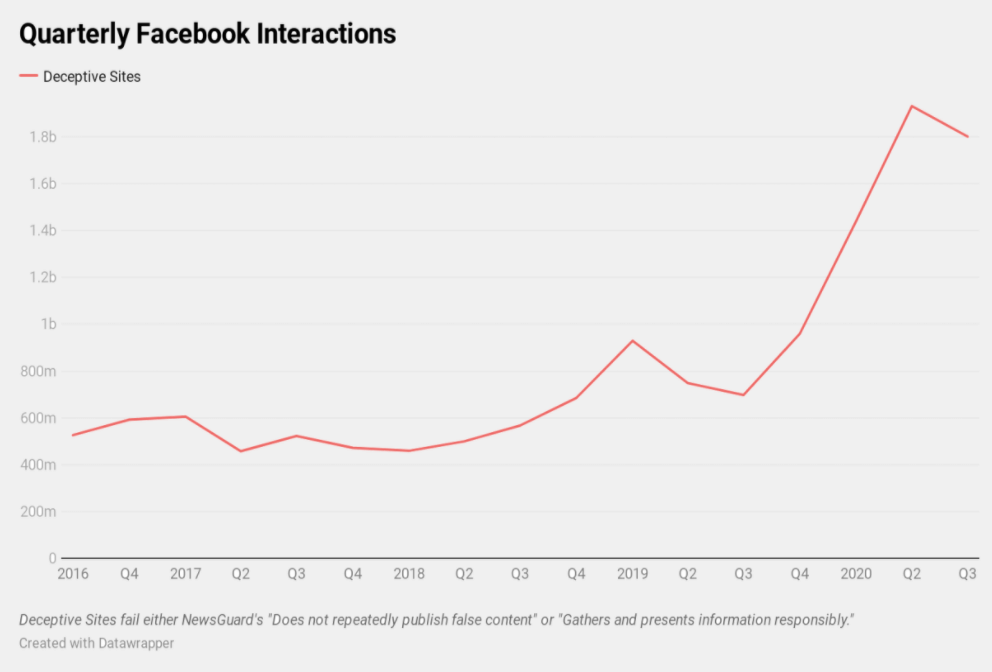 Source: The German Marshall Fund of the United States

Before we move onto the hows and the whys, we need to break down the term ‘fake news’. While it’s become a popular catch-all term under Donald Trump’s presidency, it can be categorized in two quite different ways: misinformation and disinformation.

This rapid spread of potentially harmful information has meant even the World Health Organisation has had to set up its own initiative, named Verified, to combat misinformation.

“We work with media partners, individuals, influencers and social media platforms to spread content that promotes science, offers solutions and inspires solidarity. This will be especially critical as we work to build public confidence in the safety and efficacy of future COVID-19 vaccines.” – WHO

The Causes of Covid Misinformation

It’s been a rollercoaster… year to say the least. There is no sole reason why fake news has been impacted by the current climate, but we’ve named and shamed a few of the key offenders below.

1. An increase in social media usage

Naturally, we’ve all been using our phones a lot more since have to be locked into the confinement of our own four walls.

Overall, 37.9% of people in the US have been spending two hours or more each day on social media during the pandemic.

What’s more, not only are we spending more time on social media, but we’re also consuming a lot of our news content on here, too. According to Statista, 46% of Americans have been consuming news through social media each day since March 2020. And social media is where disinformation thrives.

2. Not understanding what you’re sharing is fake

It’s difficult to judge whether the content you’re sharing these days is actually truthful. It often works like a snowball effect, too – once one ill-informed person shares misinformation, it has the potential to reach thousands of others.

In 2019, 49% of Americans that shared fake news later found out it was fake, after sharing it with friends.

Social media services are making various efforts to combat this. Twitter, for example, is asking users to read articles before they share them, or actively flagging known fake articles as harmful.

Misinformation and disinformation has been spurred on through key political figures during the pandemic. Both Donald Trump and Boris Johnson played down the virus in the first few months of it spreading, and the US and UK have had among the highest infection and death numbers since.

President Trump even went as far as suggesting the consumption of bleach could cure the virus. Plus, we only need to take a glance at his Twitter account for examples of how disinformation can be easily spread by key political figures.

For the 35.7 million Americans who live alone, 2020 has been an overwhelmingly lonely year.

In this isolation, many of us have turned to social media – a handy online tool to make the separation more bearable. This has meant, however, that we have the potential to consume more misleading information – as we mentioned earlier, social media is a catalyst for the spread of misinformation.

5. A greater sense of uncertainty

We live in a time when a set of ideas and beliefs can travel faster than ever before. Some of the wildest speculation out there is easy for most of us to dismiss. However, the stressful environment of a pandemic often leads people to look for answers, no matter how eccentric they may be.

6. A greater level of distrust

A recent study also found that those who endorsed Covid-19 conspiracy beliefs would not only have lower levels of education but would have less trust in the government's response to the crisis.

Unfortunately, it can be difficult to spot whether you’re viewing something written by a human or a bot these days – what a time we live in.

Researchers accumulated more than 200 million tweets discussing the virus since January and found that about 45% were sent by accounts that behave more like computerized robots than humans.

Why Is ‘Fake News’ Dangerous?

If we had to list all the ways fake news can be harmful, we’d be here for a long time. We can, however, boil down the two main ways that misinformation and disinformation have been a danger to Americans during 2020.

The first reason is that misinformation about the virus itself can lead to deaths. The second reason why is that it’s seeped into an increasingly polarised political environment in the run-up to an already divisive election.

Below, we’ve dug a bit deeper into how these two reasons have been wreaking havoc in America.

1. Misinformation about the virus causing harm

A global pandemic isn’t something many of us have faced in our life times – it was always going to cause people to panic. The UN Secretary-General António Guterres from the WHO noted, “As soon as the virus spread across the globe, inaccurate and even dangerous messages proliferated wildly over social media, leaving people confused, misled, and ill-advised.”

A key example of how misinformation holds potential danger is when Trump claimed that bleach could cure the virus. The president has since claimed he was joking, but for the avoidance of doubt, his words were:

“I see the disinfectant where it knocks it out in a minute. One minute! And, is there a way we can do something, by an injection inside or almost a cleaning? Because you see it gets in the lungs and it does a tremendous number on the lungs, so it’d be interesting to check that. So, that you’re going to have to use medical doctors with, but it sounds interesting to me.”

As you can imagine, most people were taken aback. But, did anyone follow in Trump’s suggestion? In the graph below, there is a clear correlation between Trump’s bizarre bleach statement in April and the number of bleach-poison incidents.

In April, which includes an eight day period from the 23rd of the month to the 30th, following Trump’s comments, the increase was 121% compared to April of 2019.

QAnon is a far-right conspiracy theory. It alleges that a cabal of Satan-worshiping pedophiles is running a global child sex-trafficking ring and plotting against US President Donald Trump, who is battling against the cabal. Since the beginning of the pandemic, this eccentric group has gained a huge following: 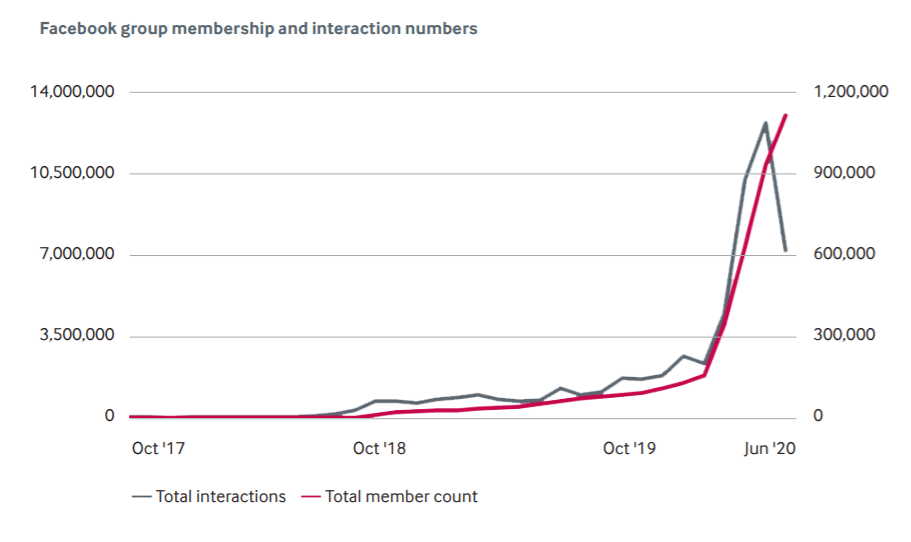 In just four months, Facebook memberships of the biggest QAnon groups rose by a massive 700%.

But why? Jovan Byford, a psychologist with the Open University told the BBC:

“In the face of the pandemic, conspiracy theories paint a world that is ordered, and controllable. Conspiracy theories flourish when social machinery breaks down and available ways of making sense of the world prove inadequate for what is going on.”

This disinformation is not only feeding people wrong information, but some believe it is spurring on the next wave of terrorism.

Over the past few months, there has been more pressure on social media sites to clamp down on misleading information. Let’s take a look at what rules have been implemented.

Which social media sites are being used the most?

What steps have these sites taken?

Coronavirus shows no sign of going away any time soon – and with some countries going back into lockdown, we all need to keep a vigilant eye out for fake news. Whether it’s being spread intentionally or not, in some cases it has potential to be as dangerous as the virus itself.