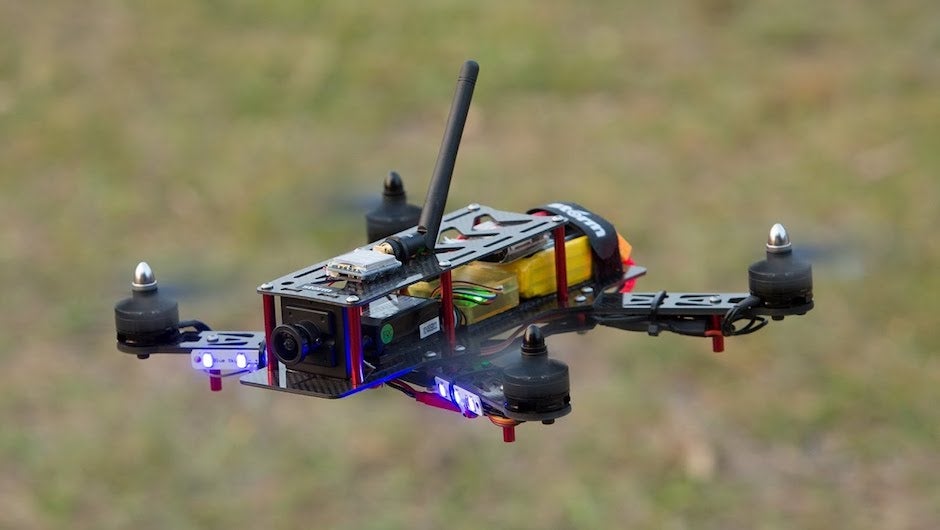 Last year you could turn on ESPN and watch one of the largest competitions for drone racing and see a well plotted out set, filled with LED light strips, and several pilots flying the same Racer3 drone through the course. It’s by no means a simple feat, flying at 85 miles per hour and having the reaction time to quickly shift a drone in almost any direction; however, this is a light version of what drone racing is and has become.

Before we get into the various versions of drone racing, let’s jump back to one of the starting points. Way, way back in 2015, the Australian Broadcasting Company (ABC), produced a feature called Game of Drones. The feature looked at the growing sport of drone racing in various underground settings. From decrepit buildings smothered in graffiti to construction sites, drone pilots would take to these improvised tracks to test their mettle. It was here in Australia that the sport of FPV racing was born. These pilots custom built their quadcopters, constantly tinkering and modifying them, while at the same time tuning their own abilities to fly them.

That particular ABC feature created a ripple effect, causing various other tech publications to pick up the story, which brought wider attention to it. Later on the likes of ESPN picked up DRL, and the sport even spun out freestyle drone piloting that takes concepts from racing but turns it into more of an art form. That’s a bit outside of our scope for this particular history lesson; however, it is as popular, if not more so, in the underground FPV world.

What is FPV or Drone Racing?

FPV Racing, commonly called drone racing, typically consists of custom-built quadcopters with front facing cameras mounted or built into them. The pilot is then fed the direct feed from said camera, which is typically funneled into a head-mounted display or goggles, that lets them have a first person view (FPV) of the drone.

In the early days, some pilots would have their feed on monitors, but it’s more common to use goggle type displays now. Just as important as the drone or the goggles is the transmitter or controller. All three devices need to work in real-time, with as little lag or interference as possible, so that the pilot can maneuver properly around the set course. If you’ve ever played with a toy drone that has no built in stabilization, think of it like that but quadruple the speed. Unlike photography and videography drones, FPV drones are designed to move forward and very fast. As a result their stabilization is out, their sensitivity is up, and it takes real skill to pilot these aircrafts.

Buying a Drone? Here’s What You Need to Know First

In the U.S. most people are probably familiar with DRL or the Drone Racing League that aired on ESPN. They mimic the underground scope and feel of the original Australian concept, but create a level playing field for the pilots by using the same quadcopter. They also have backup drones, so it’s not quite like NASCAR where you have a mix of skill and mechanics involved.

For most other FPV leagues, technically any drone can be used. Now you certainly wouldn’t use a pre-built one like Air Hogs and expect a win, but hey people use fat tire bikes in Iron Man competitions so more power to you, and most quadcopters in races are custom-built. Beyond DRL, there is MultiGP, DR1, TOS FPV Racing Club, FPV Canada, and countless other FPV organizations around the world.

MultiGP, an FPV racing organization that was born in Florida now has more than 600 chapters around the world. They organize their races more similar to boxing matches where there are various classes of flight competitions such as multirotors, race wings, and fixed wings. This is further drilled down by weight class and power, which in turn allows pilots to focus more on skill versus mechanical output.

DR1 Racing on the other hand offers outdoor racing, in some very scenic locations, each located in various parts of the world. Unlike the set designed courses, DR1 uses a combination of both natural and manmade elements in their courses. This year DR1 will be featuring the likes of Isle of Man T, Bunowen Castle in Ireland, Mojave Air and Space Port, and a few others.

Unlike DRL and MultiGP, DR1 features open specs, which means both the teams technical abilities and pilots are fully in play.