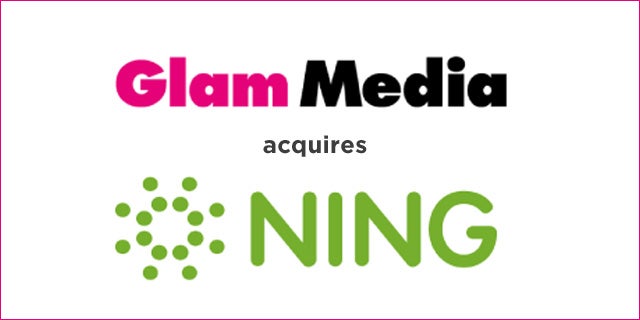 Yesterday, the social networking platform Ning was acquired by Glam Media. This was interesting news as Ning was backed by Netscape founder Marc Andreessen and took a boatload of funding, somewhere in the tune of close to $120 million. Ning was one of the first social platforms that offered APIs to roll out your own social networking site or mashup.

I remember quite a buzz when Ning launched in the fall of 2005, just as the Web 2.0 area of startups was taking off.  They got off to a quick start as a mashup tool and then morphed into a social networking platform. Ning scaled to close to 100,000 social networking sites. So it's kind of sad to see this acquisition, as it closes the book on something that had huge expectations the company seemed to fall short of, but at least they found a home that can leverage the platform.

Glam Media, on the other hand, launched at a similar time as Ning but as a “social blog community.”  Since launching, they have grown from just seven publishers and 12 authors to more than 2,500 publishers and 4,000 authors globally. With the acquisition of Ning, some consider Glam Media second in reach behind Facebook. Glam also offers a number of both advertising and content platform options. So it will be interesting to see if adding Ning to the mix will help them grow even more.

Terms of the acquisition were not disclosed, but we highly doubt the acquisition was anything near the $750 million dollars that Ning was said to be valued at in 2010.  Additionally, Netscape founder and Ning lead investor Marc Andreessen will join Glam Media’s board of directors, joining the top venture firm investors in Glam which include Tim Draper, the D in DFJ and Accel’s Thereisa Ranzetta among others.