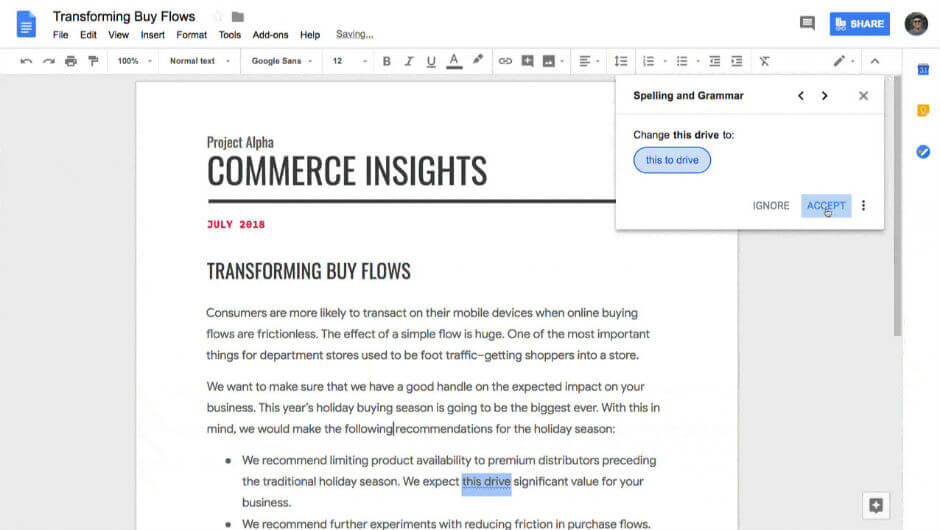 Google has introduced a grammar checker, known as grammar suggestions, for its cloud-based word processing tool, Google Docs. Is this the end of proofreading by a human pair of eyes, or could the bots still be a ways off understanding the nuances of human language?

The new grammar checker is powered by an AI similar to the one already used on Google Translate. Google reckons that grammar suggestions, will, in conjunction with other AI-powered tools, improve work efficiency and enhance human skills.

Google’s grammar-checking tools claim to enhance writing quality and boost efficiency. The small amounts of time saved by these automatic checks will, incrementally, save hours and days, Google claims.

For example, the less time you spend proofreading and correcting an article you’re sending to your boss, the more time you have to get on with data analysis of the article’s performance (also helped by Google, no doubt).

The grammar suggestions tool can catch several different types of errors, ranging from using “an” instead of “a”, to correcting incorrectly used subordinating clauses. And, it’ll actually fix these more complex errors for you, rather than giving you the perennially unhelpful “Fragment (consider revising)” suggestion that Microsoft Word comes up with when you bungle a sentence’s structure.

The grammar suggestions tool is currently only available for organizations using the G Suite Early Adopter Program, but it will be rolled out to other businesses, and Joe Public, soon.

Of course, this new tool is only valuable if it works well. It won’t be much use if you end up adding more errors into your work than you started with if the AI fails to show its intelligence, as with some noteworthy Google Translate fails.

Could AI Grammar Beat a Human’s?

While it’s fun to speculate about the potential of grammar suggestions, it’s unlikely that a bot could ever truly beat a human when it comes to successfully editing written language.

Proofreading and basic grammar checks? Perhaps. But, for complex creative work, computers are unlikely to understand the nuance and devices used by writers to create engaging narratives. But, I would say that, wouldn’t I? 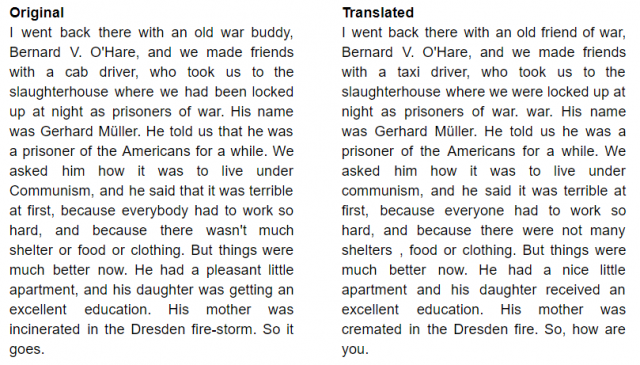 To see how this works in practice at the moment, we translated an excerpt of Kurt Vonnegut's classic Slaughterhouse Five from English, to French and then back to English, using Google Translate. As you can see, it's a pretty good translation. However, there are several key changes it made – “incinerated” to “cremated”, “fire-storm” to “fire” and, “So it goes” (a key recurring phrase in the book) to “So, how are you”. It seems unlikely, at least in the near term, that AI-powered language tools would be able to understand and replicate this kind of creative writing.

With all that being said, though, AI neural networks have already created convincing – if slightly dry – articles, which are being used by publishing companies to disseminate ‘straight facts’ news stories quickly. For example, Associated Press has used an AI tool to generate its quarterly earnings reports.

These are articles that simply list how well a company has done in the past quarter – they’re unlikely to be winning Pulitzers any time soon. However, by switching to this AI-powered tool, AP saved its staff valuable hours, while increasing the number of earnings reports it could generate. An actual no-brainer.

So, if they can generate plain language news stories, it’s likely that AI-powered tools will be able to spell and grammar check them, as well.

This works brilliantly if, for example, you’re using AI tech to analyse data sets, as the data points are fixed. Machines are great at spotting patterns – whether that’s in the structure of someone’s face or in farmers’ fields when they’re looking to make incremental gains for their agriculture business.

To be sure, there are patterns in language – “an” precedes a noun that starts with a vowel, for example, and a machine can correct this when missed. But, ensuring pattern analysis is accurate when dealing with language is much more complex.

The Importance of Context

For a start, everyone writes according to context. If you’re writing your PhD, it’s going to read very differently compared to, say, the script for a comedy film. Will the grammar suggestions tool be able to recognise the context and adapt the way it polices your language?

Of course, you don’t have to accept the changes it suggests, but if this artificial intelligence fails to become actually intelligent, it might cease to be useful at all.

In some circumstances, writers may deliberately decide to flout the rules of language to create inferences and feelings in their readers that they couldn’t – no matter how hard they tried, or how extensive their vocabulary, or how masterful their command of language – put into written-down words on the page and that computers simply couldn’t understand this given their reliance on rules, norms and patterns.

Alright, an exaggerated example, but see what I did there?

AI can’t be inherently creative in the way that humans are. Despite everything I’ve said about machines writing and editing the written word, if humans aren’t present to guide the AI or give it data to work with at the outset, AI creates meaningless garble.

For example, an AI-written novel made it past the first round of screening for a national literary prize in Japan. That does seem scary, but humans created the plot of the story and selected prepared sentences to start the AI off. Essentially, the computer filled in the gaps.

Ironically enough, the novel was titled The Day A Computer Writes A Novel.

Google’s application of AI smarts to its Docs tool is certainly interesting and will have useful applications. Whether it proves transformative for the copywriting process, though, is yet to be seen.