Whether you're on a Macbook, a Windows laptop, a desktop or an Android phone, a new study shows that there's a pretty good chance you're using Google Chrome right now. The Google browser is beating the competition at almost every turn, with big implications for the internet as a whole.

Since its launch in 2008, Google Chrome has established itself as the browser to beat. With seamless plug-ins, unmatched ease of use, and the Google brand behind it, it's no surprise that this browser has become the go-to platform for web users worldwide.

And the statistics show that Internet Explorer, Edge, Safari and even Firefox have their work cut out for them when it comes to making up the lost ground.

The data from StatCounter shows that Google Chrome is undeniably the leading browser, with 59 percent of marketshare worldwide. That's over four times higher than the nearest rival browser.

The next closest competitor is Safari (13.7 percent), the Apple powered browser installed on all iPhones, iPads, Macbooks, and iMacs. This is followed by UC Browser (7.4 percent), owned by Alibaba Group of China, and Firefox (5.1 percent), an open-source web browser developed by Mozilla Foundation. 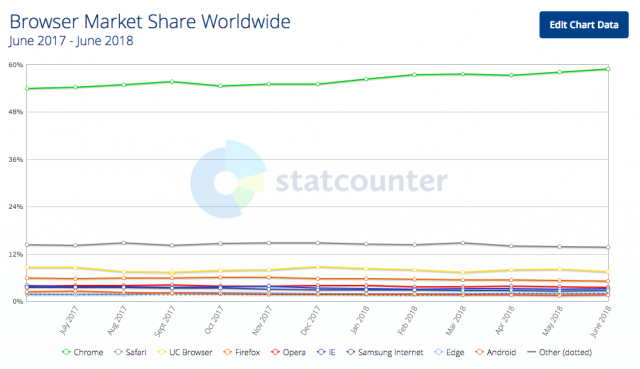 For desktop-browsing only, these numbers become even more stark. On desktops, Chrome has a quite staggering 67 percent of marketshare. That's six times higher than the next most popular browser for desktops – Firefox, with just over 11 percent.

This significant difference in popularity isn't going to change any time soon. With Microsoft's rebrand of Internet Explorer as “Edge” falling flat and Firefox updates slated as ruining the browser for fans, it'll be a long time before Google Chrome has any real competition in the browser wars. That is, of course, unless you're talking about tablets.

Google Chrome on Every Device – Except Tablets

As far as tablets are concerned, Google Chrome hasn't demonstrated its dominance nearly as much as it has on mobile and desktop.

With only 25 percent of market share, compared to Safari's 59 percent, Apple appears to have Google beat when it comes to tablets. 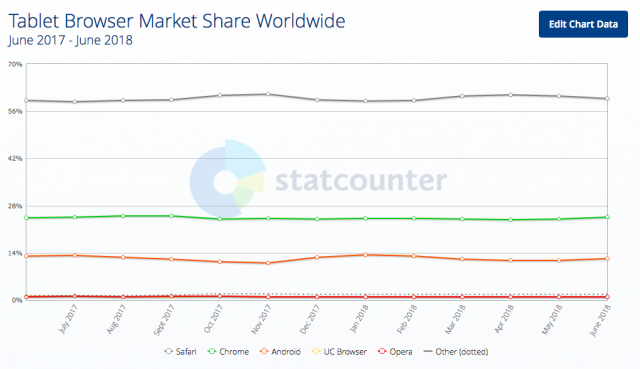 There is, however, a pretty good reason for this. Because Apple has such a high percentage of tablet market share, it's safe to say that all those pre-downloaded copies of Safari on the incredibly popular iPad are pushing numbers in Apple's favor.

But, when you look at the overall numbers, it's clear that one browser is more popular than the others. But is it better?

Is Google Chrome That Much Better?

Being four times more popular than rival browsers is one thing. But has Google Chrome earned this popularity through branding and name-recognition? Or is Google Chrome actually that good?

With a plentiful catalog of plug-ins and apps like password managers, a minimalist interface, and convenient features like the ability to search in the address bar, the reality is that Google Chrome is setting the pace for other browsers to keep up with.

That's at least partly due to the vast reach of the Google online experience.

In the same way Apple products are popular due to their comprehensive integration with one another, Google's digital tools, like Gmail, Google Maps, YouTube, and Google Search, make using Google Chrome a no-brainer.

Sure, other rival browsers have compatibility with these apps, but it's just not the same. When you go with Google, you go with an army of online tools that can manage everything from your schedule to your email.

Plus, with the resources of Google behind it, Chrome provides necessary updates, including built-in ad-blocking, a lot faster and more frequently than rivals.

When you reach this level of popularity, your rivals have an even harder time getting noticed. Internet Explorer, for one, was always plagued with complaints of slow-run times. And this perception tarnished the IE brand, even if it was distanced from the truth.

The reality is that Internet Explorer became comparable to Chrome, but Chrome was already so popular that any change from the norm elicited a negative response.

Even now, Edge continues to be in the same ballpark as Chrome as far as speeds are concerned, but people are decidedly set in their ways, and it's going to take a lot more than comparable speeds to change that.

Chrome is undeniably the most popular browser, but others have their advantages. Opera for one, comes with the free Opera VPN built in, which means that those focused on privacy will likely use it more often. Check out our full review of Opera Free VPN to learn more.

Considering Google's outright dominance of browser popularity, a pressing question arises for SEO experts: is it worth optimizing your content for anything other than Google?

No matter how you decide to optimize your site, the last thing you want to tell your SEO department is to make poor old Microsoft Bing its primary focus. People say “I'll Google it”, not “I'll Bing it”, and that's unlikely to change.

Even with millions of iOS users worldwide to consider, it's worth keeping in mind that the Safari browser lets you choose which search tool to use when setting up – Google search is still the obvious choice that most will make.

As if we ever needed reminding, search traffic is coming from Google first and foremost, and that's aided by the huge number of customers worldwide using Chrome and its built-in, logical use of Google search.