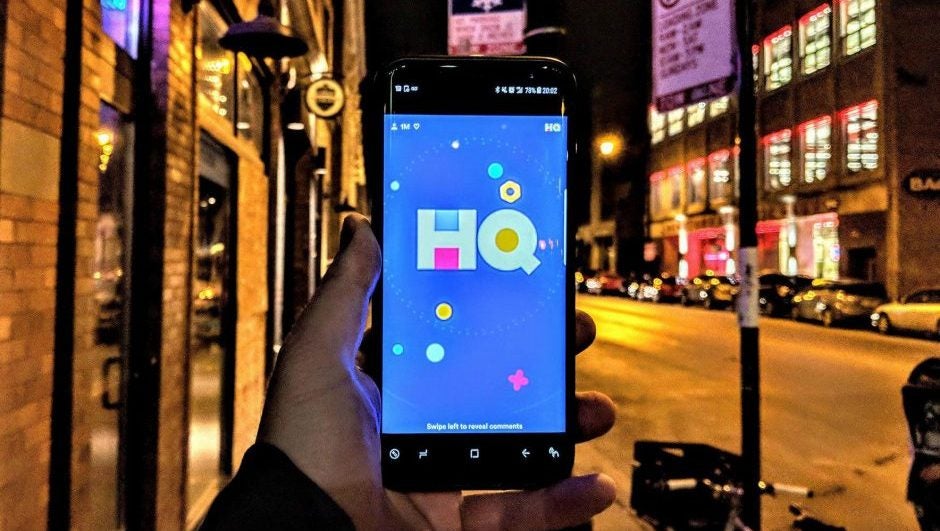 Answering trivia questions to win money is an undeniably good time. You could be doing it in the back of a bar during any one of millions of trivia nights held around the world. You could be doing it in your basement by yourself through any number of websites and computer games that cater to the particularly quizzical. You could even be doing it in front of Alex Trebek on an episode of Jeopardy! The social pastime is so consistently popular that there are clubs, leagues, and entire television networks dedicated to people winning money by answering trivia questions. Which means that it was only a matter of time before a game show app became the new standard for the medium. HQ Live is that app.

In its nearly four month existence, the mobile app, available on Android and iOS, has exploded in popularity. Having reached more than one million players in multiple broadcasts this year, the game is poised to reach the Vine-like success its founders are used to. That is of course, if they can effectively monetize the show and maintain the pace at which their app has taken off. But with complaints of frequent glitches and low payouts, who knows where this mobile game show will land on the great app spectrum of history.

Tired of hearing me babble on about the fate of a mobile game show app? Well then, let's learn how to play this thing!

Like any game show, the HQ Live broadcast, which occurs at 9pm EST everyday and 3pm EST on weekdays, starts with an overenthusiastic host lobbing pun after pun at an audience that is barely interested and, in the case of HQ Live, not even in the building.

Once the game begins, every player logged into the app answers between twelve and fifteen timed, multiple-choice questions. If you get it right, you move on to the next question. If you get it wrong, you're out. The last players standing splits the predetermined pot of actual money (the current average of which is approximately $2,500), that can be collected via PayPal. 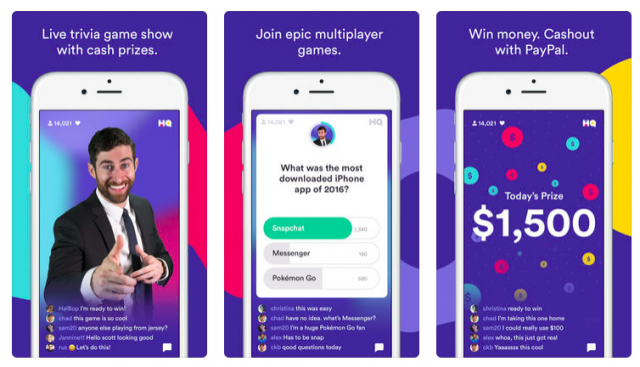 You know how some trivia games give you a lot of time to think about what the question is and deliberate about what the answer might be? Yeah, that's not HQ Live. In Tinder-like fashion, the app forces players to respond to questions in the most heart-pounding ten seconds of your life. In addition to keeping the game quick and exciting, this also prevents their millions of players from looking up the answers (not that they don't try, according to some pretty hilarious Google Trends stats).

As the cofounders of Vine, Rus Yusupov and Colin Kroll are as familiar with mobile success as they are tragical failure. Vine reached colossal heights before being acquired by Twitter in 2012. However, Rus and Colin left Twitter in 2015 after their pride and joy was essentially abandoned by the social media company. A year later, Vine closed up shop for good, and Rus was all too quick to chime in about what had happened.

Determined to capture that same innovative spark, Rus and Colin launched Intermedia Labs, an app studio that could ideally churn out big hits like Vine on a more consistent basis. However, with duds like Hype and Bounce floundering in the App Store, they weren't off to a great start. That is, of course, until HQ Live came along.

With less than 4,000 players per broadcast in October and more than one million today, it's hard to deny that Rus and Colin have hit pay dirt. With an initial funding round of $8 million dollars from Lightspeed Venture Partners and another on the way that could put the value of the company at $100 million, paying out the pot is hardly an issue. Plus with plenty of options when it comes to future monetization, HQ Live should be sitting pretty for quite some time.

“I mean, Jeopardy! can run for 30 years,” said Scott Rogowsky, the host of HQ Live, to Bloomberg Businessweek. “So why can’t we?”

Like Facebook, HQ Live is testing the waters of its own popularity before introducing any serious monetization efforts into the fray. As seasoned and rookie players will often point out, there are no ads, no product placement, and no conceivable way the game show app could possibly be making money. Rus has been adamant that monetization is not the company's focus at the current stage. But even if that doesn't last, it won't turn into an advertisement wasteland like some of our favorite social media platforms.

“If we do any brand integrations or sponsors, the focus will be on making it enhance the gameplay,” said Rus to Variety. “For a user, the worst thing is feeling like, ‘I’m being optimized – I’m the product now.’ We want to make a great game, and make it grow and become something really special.”

So how could they monetize the game in the future? With plenty of breaks between questions and a host that is all too skilled at running his mouth, commercials and sponsored breaks seem like the most logical step towards actually making some money. They're already using these breaks as a chance to promote their social media accounts, as well as remind the audience that they are playing HQ Live. It would be a small leap to begin selling those brief, albeit lucrative, spots for their own personal gain. After all, a company has to earn money eventually, particularly with deep-pocketed investors waiting in the wings for their ROI.

Despite its undeniable popularity and unbridled potential, HQ Live still has its critics. Like any app that sees unprecedented success, there are plenty of complainers out there insisting that they can't pull it off. So what are they complaining about? Oh, pretty much anything they can get their hands on.

Hosting a one million person game show via live video is understandably no easy feat. After all, even Facebook Live suffers its fair share of glitches, and it has become one of the most popular means of viewing videos on the internet today. Still, players and critics insist that the glitchy user experience is causing too much strife for the game to be successful in the long run, so much so that HQ Live had to respond.

You hate the lag, we hate the lag! We know it’s frustrating and we’re working hard to fix it. Thanks for continuing to play while we work through it. We’re truly sorry for the frustration, but we won’t rest until everyone’s happy!

There's no two ways about it; live video is a bear. Yes, with a 100 mbps WiFi signal or a 4G LTE connection in the heart of a major city, you'll enjoy a glitch free game. But if HQ Live wants to become the new norm for the game show medium, they're going to need to find a way to improve their infrastructure before its too late. Although, if 5G arrives ahead of schedule, they could be sitting pretty without having to lift a finger.

Show Us the Money

Prize pots of $2,500 sound pretty great in theory. However, with one million players per broadcast and only twelve questions to whittle them down, splitting the pot can leave some players wanting a little bit more. With the average payout coming in around $10-$12 per player, critics have wondered when the game will start offering some real cheddar. Fortunately, HQ Live has no intention of falling behind on this matter.

According to Variety, the game show startup plans on bumping up the cash pool progressively as time goes on, ideally landing at around $1 million to be split among the winners. Not too shabby for a game that doesn't require any buy-in at all.

While most critics insist that the game is merely growing too fast to adhere to the needs of their players, some are reading into things a little bit more. Considering the quickness with which players are asked to respond to questions, one critic in particular believes that HQ Live could be another straw on the back of the fake news camel. And he spared no drama in making that point.

“In an era cacophonous with the din of social-media manipulation, fake news, and general mistrust, the app offers a sign of what the future of propaganda might look like. If knowledge is best tested from the gut first, on the private screens of individuals, with the head weighing in only after it’s too late, then virtue can be measured by reflex rather than reason,” wrote Ian Bogost, a professor of interactive computing at the Georgia Institute of Technology, in the Atlantic.

“No longer will misinformation take the form of falsely staged events that went down differently than they are portrayed, or that never took place at all. Instead, one can imagine that tests of knowledge amount to tests of loyalty, erupting on the screens clutched by citizens at all times, demanding instant, correct responses.

With all the seriousness of a potential Hunger Games participant, this critic is plainly saying that HQ Live could be the catalyst for a dystopian future akin to 1984 or Fahrenheit 451. However, you'd be hard-pressed to convince me that the cofounders of Vine, a popular app that was acquired, dismantled, and discontinued by a larger, more established company, would take part in anything so sinister. For now, the game remains a refreshing, light-hearted romp through a staple of entertainment culture via the smartphones we hold so near and dear to our hearts. Talk about a match made in trivia heaven.