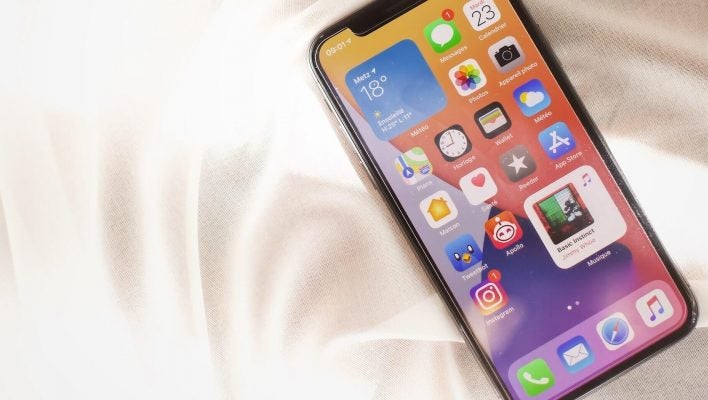 Apple has just made its iOS 14.5 update available, which includes some big changes to the operating system.

Key among them is the ability to unlock an iPhone when using an Apple Watch while wearing a face mask, and new privacy controls that will give users more control over who has access to their data.

The update can be accessed now directly from your iPhone, but should you grab it now, or wait?

The iOS14.5 update is a substantial one, so lets take a look at what iPhone users can expect when they download the update:

With iOS14.5, you can unlock your iPhone with Face ID while wearing a mask, meaning no more fumbling to pull it down or desperately trying to get it to recognize you.

Although before you get too excited, you'll need to own an Apple Watch too. And it only works with the iPhone X and later. Still, if you have both these devices, simply have the Apple Watch unlocked, look at your phone, and a haptic feedback notification from the watch will confirm that the iPhone has been unlocked.

The update also sees Siri getting a facelift, including scrapping the classic default Siri voice for good. Now, users get a bit more choice, starting from when they first set up their device, with, according to Apple, more diverse options. The new voices adopt neural text-to-speech technology, and Apple boast that they sound incredibly natural.

A big one for the security conscious (which, really, should be all of us), App Tracking Transparency requests that apps get user's permission before tracking their data for advertising, or sharing with third parties. We've seen a big spat between Apple and Facebook on this front in recent months, and this new app will only widen the chasm between the way both companies approach personal data. With the app, users can also see which apps have requested these permissions, and change at a later date.

If you're only here for those hot emoji updates, then here we go. The couple kissing and couple with heart emojis can now have their skin tones changed. There are also new emojis for face exhaling, woman with beard, hearts on fire, face in cloud, and more.

The newly announced AirTag devices, designed to help you keep track of your belongings, also need iPhone functionality. This update includes it. Not exciting perhaps, but a key update for a brand new Apple product.

Users in the US and China can now report accidents or road issues in Apple Maps through Siri. Voice commands now allow drivers to highlight potential problems without the need to actually take their eyes off the road.

A small update in the scale of things, but listeners can now save and download episodes so they are automatically added to the users library.

If you're an iPhone user, chances are that you're eager to try out these new features, and if you update your phone now, you could have them in minutes. The question is, should you?

Generally speaking, updating any device is a good idea. Not only do you get access to new tools and toys, but it also ensures that your devices security settings are up to date too. Hackers are constantly attempting to circumvent product security, and these updates ensure that manufacturers can keep one step ahead of them, by introducing new security checks, and patching vulnerabilities. Updates also keep your device running too, well, at least most of the time.

When a new OS update is made public, we usually hear of some teething problems in the early days. These could be small annoyances, to, in the most extreme situations, devices becoming unusable. Apple hasn't dodged this bad luck itself. For example, the iOS14 update caused widespread complaints about shortening battery life and broken Wi-Fi, issues which it fixed with its 14.1 update.

So, our advice is to leave it a few days, and see if there are any issues raised by the Apple community. While updates do go through rigorous testing, no amount of planning can replicate the roll out to millions of iPhones worldwide.