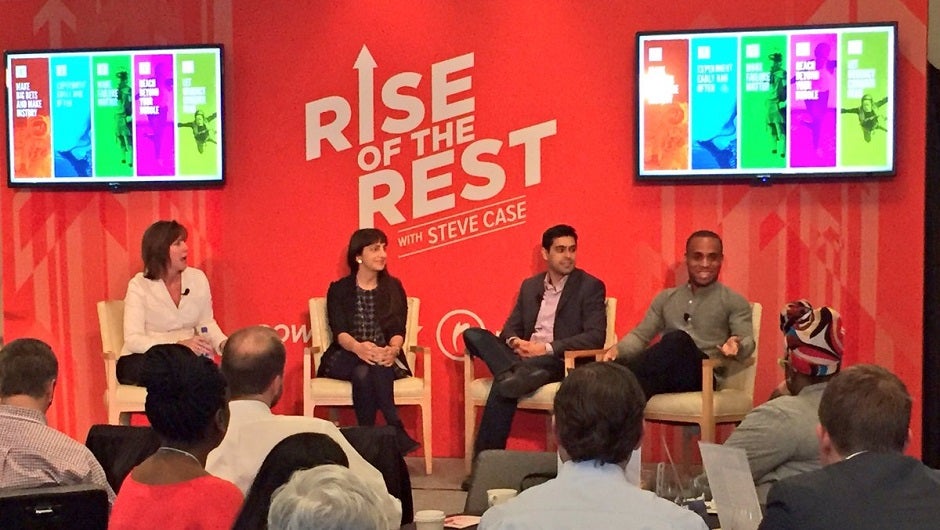 How did Jean Case's talk on Being Fearless open at the Rise of the Rest Summit today? With a bit of a head scratcher.

“What if taking risks were the status quo?”

In her talk, Jean walked through five values and goals that are most often found in the most fearless success stories out there. Here's a look at each one, and what insight Jean had to offer about them.

Yes, “moonshots” are a bit cliché at this point, but taking a look at the biggest bet of all can reveal just why going out on a limb can be a game-changer. After all, we didn't just go to the moon: We came back, too. The technology that was developed as a result has applications beyond just space travel.

“Your iPhone communication, the internet — all of the things that define our society today — were born out of the technologies that were first involved in our trip to the moon,” Jean explains.

Fast forward to today, and the clear believer in making big bets is Elon Musk: His sole goal is making it to Mars.

It's easy to slow down your risks once you've hit success. But it's essential to stay willing to fail instead. In fact, as Jean explains, your entire company culture needs to remember this point.

“We constantly have to think about innovation every day,” Jean says. “And you guys are risk takers, as I said. But is your culture? Do you know how to maintain a risk-taking culture in your organization? Because if you don't, you might find that even though you might have started out as that risk-taking entrepreneur, the culture might eat you.”

Those on the front lines of innovation will have failures. But the fearless ones know that failure is unavoidable.

“In my role as CEO of this foundation I've had big, high-profile failures that I've actually written about,” Jean says.

Jean can't put enough emphasis on how easy it is spend your time fixing a problem when you should simply walk away, but she also highlights how to make a failure matter: Ask yourself, “How can I learn from that?”

Reach Beyond Your Bubble

“Connect with people unlike you. We like to say that innovations happens at intersections.”

Find talents and capabilities that you don't have in your business. Then search them out. This is a tricky rule to follow, as it's hard to know what skills and knowledge you're missing. After all, you're missing them.

Finding a new frame of reference is often simply a matter of making an unusual connection. Talk to someone you don't know. Visit a meetup in a new city. Reach beyond your bubble and dig into the new experience to see what you were missing.

Finally, a classic skill for any entrepreneur: Focus on the most urgent tasks rather than allowing a fear of failure to slip into your mentality. Jean also shared her favorite quote:

“It always seems impossible until it's done.”

At the Case Foundation, Jean's work falls into three pillars: Revolutionizing philanthropy, unleashing entrepreneurship, and igniting civic engagement. Thankfully, she has let those urgencies conquer fear in order to make a difference in the world through the act of being fearless.

Still interested in hearing more? Check out a video of the entire talk below, via the Tech.Co Facebook page.

Jean Case on Being Fearless at Rise of the Rest Summit