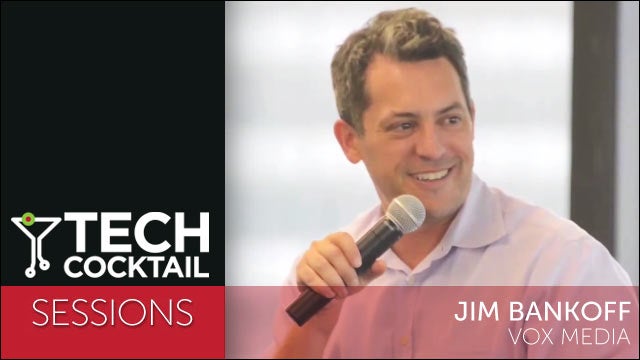 In his day to day with Vox Media, Jim Bankoff runs all aspects of one of the fastest growing online publishers. And you're most likely familiar with Vox Media if you’ve read any of the sites they manage like SBNation, The Verge, and Eater.

But did you also know that before leading Vox Media, Bankoff developed and led dozens of the most popular websites on the internet? AOL, Mapquest, Moviefone, AOL Music, TMZ, and Engadget were all under his command as an Exeuctive Vice President at AOL.

Bankoff also oversaw AOL’s industry-leading instant messaging services, AIM and ICQ, and social networking and community applications including Blogsmith and Netscape. His accomplishments have earned him wide renown, most notably the first Emmy ever awarded to a webcast, for his role as Executive Producer of the Live 8 concerts online.

It was no surprise that we were beyond excited to welcome him to the stage during our most recent DC Sessions for a fireside chat with Frank Gruber. During the talk, Bankoff talked about Vox's formula for success, how content shouldn't be viewed as a product, and how to leverage company culture to attract high-grade talent to your organization.