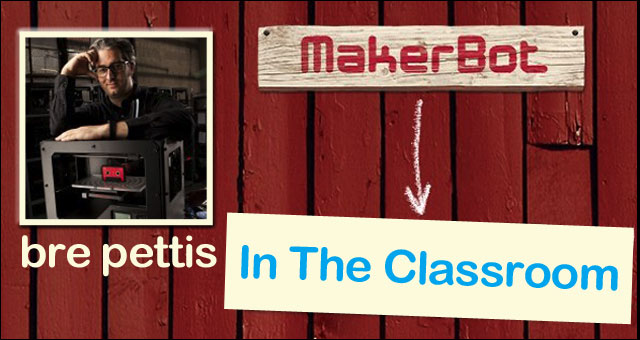 Back in October, at Tech Cocktail Celebrate, MakerBot co-founder and CEO Bre Pettis informally announced his dream of putting a 3D printer in every school in America. Tech Cocktail’s Frank Gruber asked Pettis about the future of 3D printing and where he saw the technology heading. Without hesitation, Pettis answered, “Schools.”

He talked about the disappearance of wood and metal shop classes in school curricula and how this change has affected students. “They don’t get to use their hands. They don’t get to make things,” he said. “One of the things that is on my agenda is to fix that – and put MakerBots in every school in America.”

Today, MakerBot and key partners officially announced the initiative that will turn that dream into reality. MakerBot announced a partnership with DonorsChoose.org,  America Makes, and Autodesk to tackle the lofty mission of putting a MakerBot Desktop 3D Printer in every U.S. school. The inspiration behind this goal? President Obama himself.

In the recent State of the Union Address, President Obama introduced an initiative to bring manufacturing jobs back to the U.S. And, he expressed high hopes for the 3D printing industry, saying:

“3D printing has the potential to revolutionize the way we make almost everything. We must ensure that the Next Industrial Revolution in manufacturing will happen in America. We can get that done.”

MakerBot couldn’t agree more, and the company is inspired by Obama’s commitment. In a press release, the company said it is “eager to do its part to educate today's students, who are the next generation of innovative makers, engineers, product designers, architects, and artists, who could benefit from having 3D printing technology in the classroom.”

Starting today, individuals and corporations who want to help can visit DonorsChoose.org, a crowdfunding site just for teachers, and pledge to financially support the program. Then, teachers can register on DonorsChoose.org for a MakerBot Academy bundle.

The bundle consists of a MakerBot Replicator 2 Desktop 3D Printer, three spools of MakerBot® PLA Filament, and a full year of the MakerBot MakerCare™ Service and Protection Plan. Teachers will receive support and a 3D printing curriculum to use in the classroom as well.

MakerBot and key partners will be providing the resources for this education initiative. Bre Pettis, CEO of MakerBot, has personally pledged to put a MakerBot® Replicator® 2 Desktop 3D Printer in public high schools in MakerBot’s hometown of Brooklyn, N.Y.  In addition, Ralph Crump, original inventor of FDM 3D printing technology and founder of Stratasys, has pledged his support. Pettis encourages everyone to join MakerBot in this effort at an individual or corporate level to help move America’s students to the forefront of technology and global competitiveness.

“To get this done, we are going to have to do it together,” said Pettis.

Watch the entire video, in which Pettis discusses his journey to starting MakerBot, the inspirational ways people are already using the technology, and the exciting things to come in the 3D printing industry: