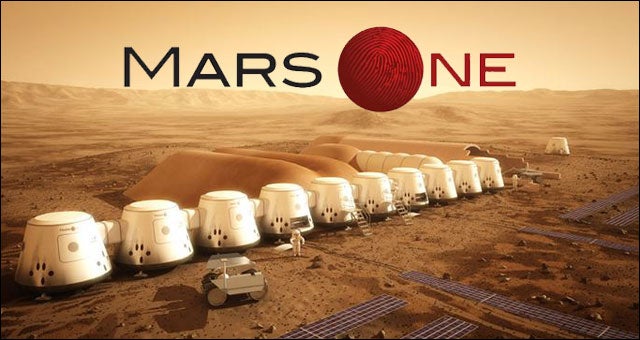 The landing of Mars Rover Curiosity has launched a new excitement around space exploration – and not just in the US. A Dutch startup called Mars One is looking to take your curiosity even further by pledging to put humans on a one-way trip to Mars by 2023. Led by entrepreneur Bas Lansdorp, the idea is to bring small pods to Mars for humans to live in. According to the website's posted mission:

Mars One plans to establish the first human settlement on Mars by April 2023. The first crew of four astronauts emigrate to their new planet from Earth, a journey that takes seven months. A new team will join the settlement every two years. By 2033 there will be over twenty people living, working and flourishing on Mars, their new home.

The program plans to leverage the hype of the media to raise $6 billion from private investors and supporters, which is the estimated amount needed to complete this mission. While $6 billion in funding may seem like an obstacle, the team plans to turn Mars One into a “global media spectacle,” broadcasting all aspects of the preparations and the lives of the participating astronauts (slightly reminiscent of the plot from the film The Truman Show, with the added drama of a suicide mission).

Judging by the popularity of reality TV and the latest Mars Rover launch, which at this point has a Twitter account with over 1 million followers, and the rise of crowdfunding platforms like Kickstarter and IndieGoGo, I have no doubt that Mars One, with its 10 year lead time, could build up the hype and raise all of the funds.

How does Mars One plan on doing this from a technical perspective? Surprisingly, they do not plan on building any new technology, but instead will use the technologies already out there by partnering with other companies. Mars One plans to use:

Watch the full video, which explains the plans, below.

While it does sounds like a one-way trip of a lifetime, I am curious how long your lifespan on Mars might be. An hour, a day, a week or years? It is unclear whether Mars One has any idea how long someone could survive on Mars, though NASA has stated humans could survive the radiation. There have also been some simulations performed on Earth, like Biosphere 2 at University of Arizona, which helped further the idea that humans could live in a self-sustainable, enclosed environment.

Interested in heading to Mars? You will have to apply and go through a rigorous 10 year process as they select just 4 astronauts. Question: Would you want to be one of the brave few to take the voyage?