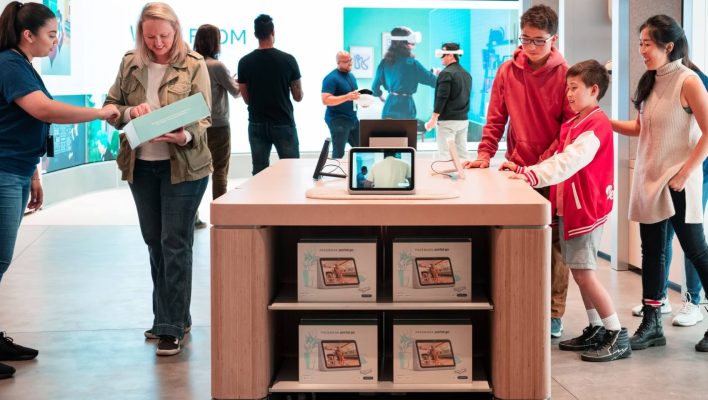 Meta needs everyone wearing VR headsets, so it's opening physical stores to sell them. Their first showcase opens this May in Burlingame, California to sell a range of hardware products.

Meta, the company formerly known as Facebook, is betting big on the metaverse as an immersive virtual reality space that users can live and work within. Selling VR headsets is a big pillar in that plan.

The store opening in May will include a “special demo area” specifically for trying the Portal device, as well as another demo area, an “interactive Quest 2 display wall” that lets visitors try games including Beat Saber, GOLF+, Real VR Fishing, or Supernatural.

While someone is using a Quest 2 at the display wall, a big wall-to-wall curved LED screen will show off what they are seeing within their headset.

It's a way to get visitors to try out hardware that they might never bother with otherwise — Meta mentions plenty of features in its press release about the new store, from Portal's smart camera to Ray-Bans foray into the internet of things.

The store is also engineered to spread the word farther. For example, the Quest 2 display wall demo will gift every user with “a 30-second mixed reality clip of your demo experience that’s yours to share.”

Overall, with its huge emphasis on demos, Meta's store appears to function more like a playground than a typical glasses store.

Is Meta now a retailer?

Amazon shuttered a whopping 68 physical retail locations last month in a sobering reminder that even the biggest internet giants can't succeed in every single industry at once.

But Meta kind of needs to, because it's trapped in a Catch-22: In order to move everyone into a big virtual reality metaverse, they need to get all those people to buy their VR headsets out in the boring normal world.

Launching an entire raft of physical stores didn't work for Amazon, and probably won't for Meta. But Meta just needs to pitch VR as the next big thing — still a huge sell, but easier than becoming Walmart.

If Meta's store winds up being more of an advertisement for the metaverse than a self-sustaining business, it's likely already succeeded. After all, you just finished reading about it.