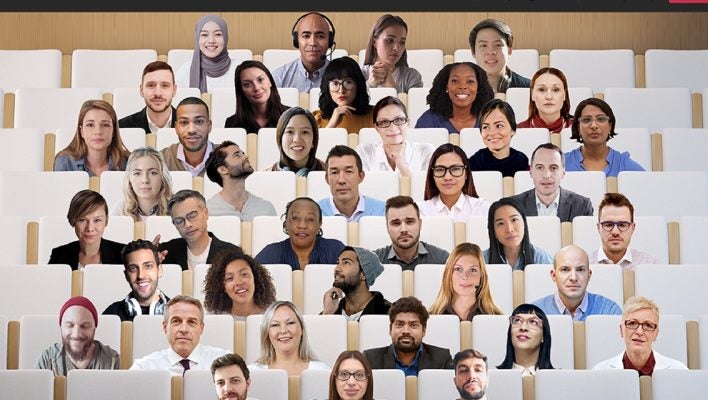 Video meetings have been slowly creeping into businesses for some years now, but the current pandemic has thrust them into daily life for many of us. In its newly announced update, Microsoft Teams is aiming to make those video calls easier and more like a good old fashioned, in-person meeting.

The new additions, which are coming later in the year, introduce a virtual office space with “Together mode”, the ability to launch separate break out rooms, and, yes, emojis.

Many of the new introductions appear to be tailored to recreating the traditional office meeting, but, with a modern edge. Can Microsoft help bridge the gap between the online work world and the physical office space?

Is Teams a true player? See our guide to the Best Video Conferencing Services for more

There's plenty in the pipeline for Microsoft Teams, including the following:

This is one of the flagship features of the update, and one that Microsoft seems eager to crow about. Personally, we happen to think there are more useful ones further down the update list, but let's tackle Together mode, first.

Together mode, as the name suggests, places all participants in a video chat in the same virtual room. Using AI processing to cut out participants from their background, this takes you magically from those Brady Bunch squares that separate most online meetings, and places you and your team in the same virtual space. From what we've seen so far, the end result might be a little far from the holographic conference table that your favorite sci-fi film envisioned. It's a bit more like looking out into a crowd.

Despite this, it does at least give the illusion of being more together, and cuts out the sea of bedrooms, kitchens and background flatmates that you're used to seeing on your daily calls. It promises a variety of different scenarios, but the first – auditorium – is rolling out now, with more to follow in August.

A more traditional mode than Together, Dynamic is composed of those recognizable squares. But, it gives participants more control than has been allowed before, as well as bigger potential meeting sizes (with up to 49 participants on a call).

In addition, users will also be able to curate the display to show relevant people to the meeting, alongside online content, as well as the option to create break out rooms.

This is one of the components that video meetings have struggled with to date, and few have managed to nail. Being able to create bubbles within an existing meeting could be key to keeping the momentum of the conversation without disrupting it. With break out rooms, workshop participants can split off into smaller groups; or, in social video calls, a few users can split off for a smaller group chat, without having to exit the main call.

While your average teen has numerous video filters at their disposal on their phone, the corporate world of online meetings has been decidedly slow to catch up.

With Microsoft Teams' latest updates, users can make a few improvements, such as increasing the brightness of their image, or reducing distractions in the background by blurring what's behind you.

If a picture can paint a thousand words, then can we really be snobbish about emojis?

Sometimes you can dispense with a wall of text and make do with a simply yellow thumbs up. This is never truer than when on a video call and you want to acknowledge or agree with the person talking, without interrupting them. The addition of Live Reactions to Microsoft Teams enables participants to encourage and show support and opinion during a call, without breaking up the flow.

Microsoft Teams already allows for live captions. But, later in the year, it will be adding speaker attribution, which makes it easy to follow who is currently speaking.

In a godsend for anyone who wasn't paying attention at that one pivotal moment of the video call, Microsoft Teams will now also generate live transcripts. These will be saved after the call has ended, allowing participants to check back and find out what they missed when they were answering the door for that midday Amazon delivery.

The new features that Microsoft Teams is bringing to the table won't revolutionize your video meetings, but all these quality of live improvements should at least make it easier. And, they more accurately replicate what it's like being in the same room with your colleagues.

Together mode, with the auditorium background, is rolling out now. The other features mentioned above will follow later in the year.

What is Microsoft Teams?

Microsoft Teams is the software giant's online collaboration tool. This is a software space that is still relatively young, but already has its veterans, such as Slack, which has been around for seven years. Microsoft Teams, on the other hand, is a relative newcomer, with just four years under its belt. In fact, Microsoft Teams was a direct response to Slack, after Bill Gates pulled the plug on a potential $8 million dollar bid for Slack in 2016.

As for what Microsoft Teams actually does, it acts as an online hub for meetings, chat, video calls, file sharing – everything that the modern business needs in the modern age, arguably more than ever in 2020. Pricing starts with a basic free tier, though those that want video chat included will need to sign up to a 365 Business Account, beginning at $5 per user.

As well as Slack, other Teams rivals include Google Meet, Zoom and GoToMeeting, who have experienced a huge brand recognition boon thanks to the current pandemic.

Competition between the brands is cut throat, and with its range of updates, Microsoft is clearly aiming to pull ahead of the rest of the pack.