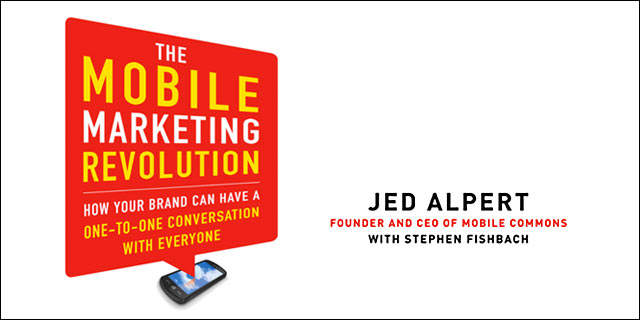 If you rely solely on social media for marketing, you’re missing out on lots of fine-grained data, opportunities to follow up, and true engagement. That’s part of the message in a new book by Jed Alpert, expert mobile communications strategist and CEO of Mobile Commons, whose clients include the Obama campaign, Nike, and AT&T.

Alpert’s new book, The Mobile Marketing Revolution: How Your Brand Can Have a One-to-One Conversation with Everyone, offers concrete tips on how to create a winning mobile marketing campaign.

“Mobile reaches everyone, everywhere, always, and is the most ubiquitous and the most used form of communication in the world,” says Alpert. “Not enough people are really thinking about mobile in the exact way that’s it’s most powerful.”

For him, that means integrating with databases and CRMs for personalized communication and working in concert with other marketing on the web or social media. Startups can use mobile not only for engagement, but also for soliciting the feedback that powers iteration and product improvements.

Below is an excerpt from the book’s Chapter 2: Being in Social Media Is Not Enough, You Have to Invite Everyone Back to Your Place (footnotes omitted).

How Do You Reel Them In?

The past six years are littered with social media missteps. Hundreds of organizations created social media campaigns with no clear goal that they were trying to achieve. Often, these campaigns ended up generating more negative attention than positive.

In 2006, General Motors launched a contest asking for user-generated videos promoting its new Chevy Tahoe SUV; it was overwhelmed with response videos that mocked the SUV’s environmental impact. In 2009, Skittles redesigned its home page to pull directly from social media highlighting the brand. Online pranksters hijacked the effort, pushing content to social media sites that either mocked Skittles or had nothing to do with Skittles at all. Spammers were able to promote their own products directly on the Skittles.com home page merely by sending out a tweet with the #skittles hashtag. In 2010, Nestle got in trouble for deleting comments from its Facebook page that were critical of its use of palm oil, which Greenpeace claims is harmful to the environment.

The problem for these campaigns was not just bad luck in setting off an overwhelming backlash of Internet mob antagonism. By entering into social media for their own sake, campaigns are inherently at risk. Without fully thinking through the goals and protocols of a successful social media campaign, brands open the door to seeing their campaigns hijacked to serve someone else’s agenda. Or, as many campaigns have discovered, you simply might not garner any attention at all.

There’s even an award for biggest social missteps—the Suxorz, which is like the Razzie of social media marketing. The restaurant chain Denny’s won the 2010 award for “Missed Connections” when it used the menus at its 1,500 locations to direct diners to www.twitter.com/dennys. The problem was that Denny’s actually didn’t own the Twitter user name Dennys, so diners who followed that link didn’t wind up on the official Denny’s Twitter page. Instead, twitter.com/dennys led them to the personal Twitter homepage of Dennys Hsieh, a young man in Taiwan, a recent tweet of whose was “網路測試: 目前在光復 路上, telnet 會頓, 但是 ftp 還是有 100KB/s … 這就是 3G 最討 厭的地方了, 用 ftp 這種來看其實都還好, 可是 telnet 之類需要 即時反應的就會有感覺”—a fairly technical tweet about FTP and 3G in Chinese characters. Not exactly the kind of content that makes someone crave a Grand Slamwich.

My point is not to criticize the low-hanging fruit of social media mistakes. An advertising campaign can go wrong no matter what medium it uses.

And vitaminwater’s Facebook campaign [where they crowdsourced the development of a new flavor] is actually an example of a social media success. The campaign achieved its goals of gaining Facebook fans and had an overwhelmingly positive media response. Since the initial campaign, vitaminwater’s Facebook page has been a model of sustained engagement. The page has featured additional promotions and coupons, and it has an almost daily status update from the team that invites a user response. For example, on September 4, 2011, vitaminwater posted “milk & cookies. coffee & doughnuts. vitaminwater & __________?” The company received 1,292 responses, with answers ranging from “popcorn!” to “protein bars!”

I’m not suggesting vitaminwater did anything wrong. The brand just could have achieved a lot more by taking one extra step. Because once you’ve accumulated a million Facebook fans and found out what snack food they like to eat with their vitaminwater, what do you do next?

However, that barely scratches the surface of the analytics that companies need to truly engage their most dedicated constituents. For all the TV ads that vitaminwater ran promoting its Facebook page—which were the most effective? Why did people join the site? When did they join? If the vitaminwater team were to post a video to the brand’s community page, they could learn how many people viewed it, but not which people viewed it. They therefore have no way to do future engagement with only those people.

Let’s explore just that September 4 status update: “milk & cookies. coffee & doughnuts. vitaminwater & _______?” Unless vitaminwater is manually recording every one of those thousand responses, they have no way to track and log who’s saying “protein bars” and who’s responding “popcorn.” Drinkers of vitaminwater are segmenting themselves into those who see vitaminwater as a fitness supplement and those who view it as a snack beverage. But without a way to record that valuable information, the company can’t use that demographic breakdown to further target those consumers. What if vitaminwater wants to launch a future drink with a protein supplement—or one that pairs particularly well with a Hershey bar? What if the brand launches an ad campaign targeted to gym rats and wants to get the word out? Having a simple way to message just a portion of your audience can be invaluable.

Of course, the whimsical status update probably was not intended to spark a marketing campaign—it was just meant to keep the page’s users engaged. But why shouldn’t the vitaminwater team want to track and use all the data they can? When vitaminwater has its users self-segmenting into discrete groups, shouldn’t they want to be able to at least record that information? Isn’t engagement without any follow-up exactly the problem?

Compare vitaminwater’s missed opportunity with a promotion that Martha Stewart Living recently ran. Martha Stewart, as I suggested earlier in this chapter, firmly believes in catering her own party. As part of the magazine’s premiere digital issue on the iPad, Martha Stewart Living created an exclusive video in which it asked decorators Rebecca Robertson and Kevin Sharkey each to design the same room in their preferred style. Sharkey created a more traditional-themed garden room, while Robertson used graphic lines and bright colors for a more modern look. The video then asked users to text in to vote for their favorite. Those who preferred the traditional room texted in “TRADITIONAL,” and those who liked the more modern room could text in (you guessed it) “MODERN.”

By using these two keywords, Martha Stewart Living segmented incoming responses based on people’s preferred design styles. It thereby immediately gained a window into the design preferences of its users—a distinction that it could then use in the future to target just one of those groups.

That opens the door to a wealth of possibilities down the road. The company can send product offers, sponsor messages, and programming updates targeted around different design aesthetics just to the people who will be most interested in them. Why waste time and money trying to market a modernist Eames chair to someone who’d rather be sitting in a wingback?

To be fair, the Martha Stewart Living promotion is fairly simple in comparison to the massive vitaminwater campaign. There was no expensive media buy promoting it, no flavor creator apps, and no product sitting on store shelves at the end of the day. But the Martha Stewart promotion was a quick hit on a digital channel rather than the culmination of a multimillion-dollar marketing initiative. Of course there’s a difference in scale between the two. The broader point is that when you build a mobile engagement campaign, you can see exactly how new members join your list, track each action they take, and ultimately follow up with messages targeted just for them. You know a lot more about your mobile subscribers than that they just “like” your product.

An integrated mobile campaign lets an organization host its own gatherings in its own digital universe, win permission for long-term communication, and create data that belongs to the company, not the social media site. That data then feeds the company’s larger customer relations management, allowing it to refine its offers. Social networking is an amazing way to get your message out, but it’s no substitute for ongoing, one-to-one connections. It’s the difference between chatting at a party and having a relationship. Someone you meet at a party might take a passing interest if you told him or her that you prefer popcorn with your vitaminwater. He or she might even “like” that fact. But if you don’t get the person’s number, you have no opportunity to make an actual friend with whom you might have a long-term relationship, sharing many different bottles of vitaminwater.

*From “The Mobile Marketing Revolution” by Jed Alpert, reprinted with permission from McGraw-Hill. Copyright 2012.*