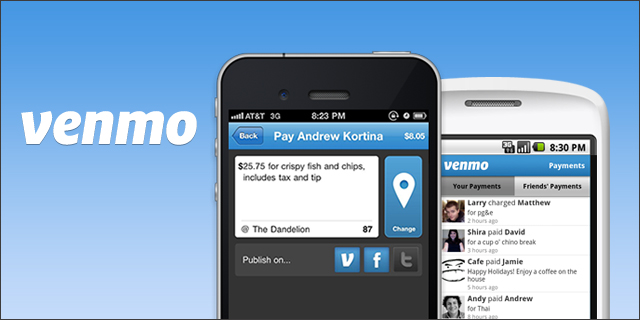 Way back in December 2010, we predicted that 2011 would be the year of mobile payment.  Boy, were we right!  We have already covered 6 different apps/platforms, and I am about to cover a 7th, Venmo, below, an app that has actually been around a while.

Tech Cocktail’s co-founder Frank Gruber explained to me that he first saw Venmo at SXSW a few years ago. Gary Vaynerchuk was an early investor, and one evening, Frank and Gary were hanging out when Gary used an SMS text to send Frank a dollar via Venmo.  As Frank noted, they were somewhat ahead of the game at that point.

Venmo was founded by under 30-year-old entrepreneurs Andrew Kortina and Iqram Magdon-Ismail in Philadelphia. The two were college freshmen roommates at Penn and formed a friendship which ultimately brought them together to create Venmo. Fewer people carry cash these days and Kortina and Magdon-Ismail saw this as an opportunity to tackle the simple problem that comes with paying back friends and family while on-the-go. Venmo lets friends pay each other back for anything – lunch, dinner, drinks, rent, groceries, tickets, trips – whatever.  It works with all the major banks in the US, like Bank of America, ING, Chase, Wells Fargo, Citi, etc., making it very easy for users to adopt.  I love this concept, especially since I go out with friends on a regular basis.  If you’re short cash, no worries – pay your friends back right then and there.

Since that night a few years ago at SXSW the mobile payment space has really heated up.  Competition abounds, though only 2 companies are mirror reflections of each other. Here are a few.

Zong: This mobile payment app allows you to buy stuff online using your mobile phone number.  You confirm the purchase on your mobile phone, and you’re done.  It is currently available in more than 40 countries and was recently acquired by eBay (nice complement to PayPal!).  Their biggest merchant is Facebook; because I am not an online gamer, I am not as familiar with the other merchants, making this app somewhat limited – at least for me.

Square: This startup just landed a $100 M round of funding – a huge vote of confidence.  They are valued at $1B, and it’s not hard to understand why.  They provide merchants with a pocket-sized credit card reader that plugs into your phone’s audio jack, allowing you to accept or make credit card payments on the go.

iZettle: Identical to Square, iZettle uses a (much bigger) credit card reader to send and receive payments.  Other than card reader size, the major difference between the 2 companies is the fact that iZettle can be used in Europe.

Google Wallet: Never resting on their laurels, Google is also preparing an app for launch.  You’ll be able to use your cell phone to pay for items at stores that have NFC technology in their terminals and POS Systems. All you’ll have to do is wave your phone in front of a device to pay for your purchase, and you’re done.  Super convenient.

Starbucks: They went ahead and created their own app that uses a QR code for mobile payments.  One of our bloggers, Anuj, who wrote about his experience using it, found that it’s not all there yet – the user experience is a little on the clunky side.

TabbedOut: This startup has a niche: restaurants.  You store your credit card information in their app, and when you are ready to pay, the app provides you with a random code that you can give to your bartender or server.