Android Pie is the latest iteration of Google's Android operating system for phones and tablets, and the biggest change that comes with it is artificial intelligence (AI) right in your pocket. The AI functions in Android Pie change the way you interact with your phone and how your phone interacts with you. We run through the new features of Android Pie and how you'd use them day-to-day.

First up, the name. It wasn't Pecan, Pumpkin or Potato that Google opted to go with for its P based update to Android, but Pie. Now that the name is known, when can you install it for your phone or tablet?

If you have a Google Pixel phone, you can download Android Pie right now. Those with devices in the Android One family should be able to get it soon, while anyone else with an Android phone (such as Samsung phone owners) will have to wait for news of the roll out by their manufacturer.

Google wants Pie to be its fastest platform yet, and that's why it's implemented machine-learning to try and stay one step ahead of the user at all times. Android Pie learns from the user's regular behaviors, anticipating the next action and changing what options it offers you to tap on, for example, depending on your likely needs.

Google says that its operating system will only get better over time too, as the more you use it, the more it will learn about you, and adapt.

Google is going hard in on AI machine-learning, attempting to tailor the Pie experience to individuals devices by having the OS smartly recognize the actions they take regularly and adapt accordingly. This could well mean a quicker and more intelligent platform.

Cutting Down Screen Time
As well as the new AI features, there's the move to get us checking our phone less with a suite of features designed to prise our eyes away from the digital world by limiting our access time and shuttering off our online social ties – for those that want to do so, of course. 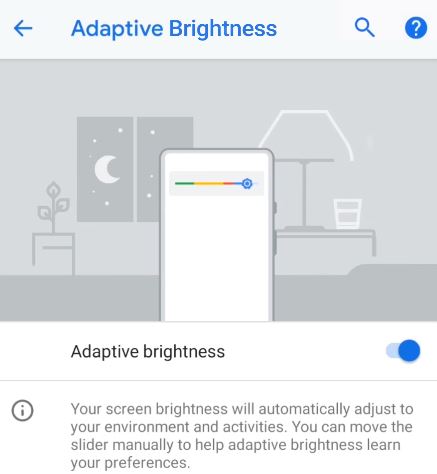 What does it do? Learns which features of your phone you use regularly, and diverts power accordingly

How can you use it? Battery life is a big concern for most phone users, which is why Pie's Adaptive Battery update is likely to be welcomed warmly. By recognising your typical usage, it ensures that the battery is powering the key apps that you're using, and not keeping any long-since-neglected apps open in the background.

What does it do? Adjusts the brightness of your device to your typical preference.

How can you use it? Automatic brightness is nothing new on phones, but what Google introduces here is brightness that reacts not only to the light in the room, but also your own preferences. Maybe you like it super bright first thing in the morning and tend to dial it down late at night. Adaptive Brightness will recognize this and adjust itself accordingly.

It's a small quality-of-life touch for those that find themselves constantly battling with their phones automatic brightness setting.

What does it do? Offers quick previews of apps at key times

How can you use it? Really committing to the pie theme with the name of this feature, Slices recognises the data you're searching for and presents it to you immediately in a preview window. Suppose you're waiting for a car to arrive and you start typing Lyft into Google. Before you finish the word, a window will pop up with key information, such a the closest driver and estimated arrival time, without having to open up the dedicated app.

What does it do? Predicts the apps that you're about to use and presents them quickly

How can you use it? Scary as it may be, Google probably knows your next move better than you do, which is why App Actions seeks to learn about the apps you use most often and when, and bring them up at the right time. Perhaps you use your headphones on your commute to get started on your next podcast. App Actions will bring up the app as soon as you plug in your headphones, and present you with the next podcast on your download list, ready to go.

Google wants you to use your device less – or at least give you the option. With app addiction and social media exposure a serious concern, it's perhaps not too surprising that the company wants to at least appear responsible and give its users the tools to limit their time staring at the screen.

There are several ways it intends to do this, from making apps on your phone less appealing (see Wind Down, below), to literally cutting you off from any potential social media updates, phonecalls or texts at predetermined times.

What does it do? Drenches your beautiful screen in grey.

How can you use it? There's been a lot of research into why we feel need the need to constantly reach for our phones, and there's a myriad of reasons for it. Perhaps one of the least surprising though is that we're attracted to bright bold colours, and our screens are popping with neon boxes all screaming for our attention. By making the screen grayscale, the theory is that you'll be less likely to want to peruse your phone as its simply not visually appealing.

It's not a new idea, and in fact one of its early pioneers is former Google Design Ethicist, Tristan Harris, now co-founder of the Center for Human Technology.

What does it do?: Mutes all alerts and calls to your phone.

How can you use it? The ability to silence everyone on your phone at once, whether they're trying to get to you via Twitter, WhatsApp, or even, just maybe, a good old fashioned phone call will be good news for those that want a break every so often. This mode can be set up to repeat at certain times, or switched on on the fly, but the idea behind it is to remove any distractions from your phone.

It's easy to see its use in the context of a business meeting for example, but in press images, Google are touting it alongside photographs of families spending ‘quality time' together, implying that the company would rather you spent more time with your kids than arguing with HulkFan283 on Twitter about the best Marvel movie.

What does it do? Sets time limits on your apps.

How can you use it? Any app, whether it's Netflix, Twitter or the latest mobile game can be a massive time sink, which is why Pie introduces timers that the user can set to limit the number of minutes spent each day on any one app. Timers can be set for apps individually, and once your time is up, the app will gray out (there's that color theory again).

It's all controlled by the user, so you can limit the time you're spending on Twitter, for example, while not restricting the time spent on other more productive apps.

What does it do? Shows the user how much time they're spending on their phone with a detailed breakdown

How can you use it? Dashboard displays exactly how much of your day is spent on Twitter, or checking eBay at work. It's a good tool to use in conjunction with the App Timer, as by spotting those apps you're committing too much time to, you can then limit yourself accordingly.