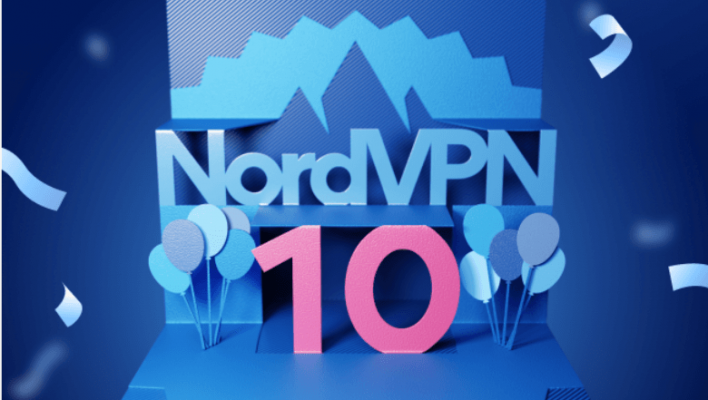 To celebrate a decade of protecting the privacy of internet users all over the world, NordVPN is giving new subscribers the chance to win up to two years of extra subscription time alongside a generous February sale.

NordVPN is one of the most popular and trusted VPN providers on the market and offers a multitude of useful features that help unblock content all over the globe whilst staying hidden and safe.

If you haven’t downloaded NordVPN already – and you’re not using another VPN provider – this is your chance to snap up an exclusive deal on a product that usually costs a lot more.

Right now, you can sign up for a two-year subscription with NordVPN for just $84 – which is only $3.49/ month and 70% less than what you’d be paying month-to-month.

If you sign up for a NordVPN account between February 9 and March 10, you’ll win extra subscription time as a gift.

After this 30 day period, the 2-year plans price will increase again to $96 — still 66% off the standard rolling monthly cost, but with no bonus time added.

If you do take advantage of the deal this month, there’s nothing you need to do to claim your extra time once you’ve purchased your subscription – it will be added automatically to your account.

Anyone can benefit from the promotion, including if you’re already using a student or influencer discount, or any other special offer.

Is NordVPN Worth the Money?

Here at Tech.co, we review VPN providers like NordVPN all the time, to help answer the most important questions you might have around using or purchasing them.

As VPN providers go, NordVPN is one of the best you can buy, coming out on top of our independent ranking of the most secure VPNs. It will send all your traffic down encrypted tunnels to one of its private servers before it reaches the internet, masking your IP address in the process and ensuring that anyone observing your internet activity won’t be able to link it to you.

NordVPN secures all your data using AES-256 encryption and is committed to keeping no logs of your activity.

Using a paid VPN subscription is a far more secure solution to private browsing than free VPNs – which should generally be avoided – or a simple proxy server or Smart DNS service, neither of which will implement rigorous encryption standards, potentially leaving your identity exposed.

NordVPN secures your data using AES-256 encryption, has committed to keeping no logs (and doesn’t even use hard disks in its servers) and speeds across its network of over 5,000 servers are top-notch, avoiding any delays to your activity.

NordVPN's top features include Double VPN, which will reroute your connection through not one but two Virtual Private Networks, Cybersec, which will flag up dodgy websites and help block adverts, and a kill-switch to ensure your internet connection drops immediately if your VPN does.

Privacy is a fundamental right that humans are entitled to both in the ‘real world' and on the internet. At a time when personal data is being compiled at an astonishing rate by companies who can profit from it, VPNs and other privacy tools have never been so important.

Remember, VPNs are completely legal in most countries, and can be used for a whole host of perfectly legitimate activities. They can be used to access geo-blocked content, for example to watch different Netflix libraries or even reduce ping time on video games.

41% of Americans are already using VPNs for business and leisure, as the value of these tools is becoming more and more apparent. VPNs aren't expensive, literally the cost of a few bucks a month, and they're easy to use too, but the extra layer of security they provide can be invaluable.