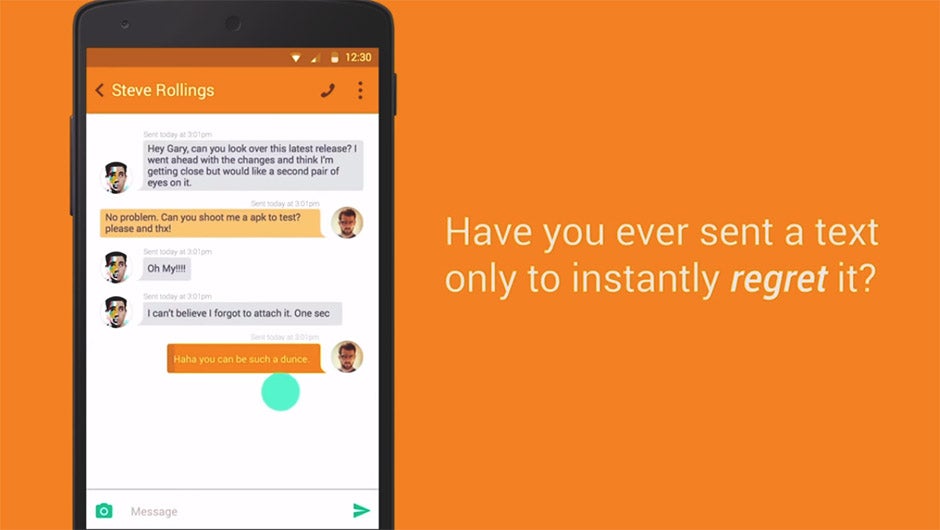 Whether you were drunk or sober, sometime in the past each and every one of us has sent a text that we wish could've taken back. One of the paradoxes about our rapid development of technology and our attempts to make machines become more human is its propensity to act in opposition to our actual human initiative; we type one thing into our phones, and our phones inevitably send an autocorrected mess. On Second Thought, a new app currently out on Android, is aimed at helping you stop sending these kinds of embarrassing texts – and, no, you shouldn't think of it as another messaging app…because it isn't.

Working alongside your current SMS and MMS, On Second Thought is not a separate messaging app; rather, it syncs with your phone's current messaging and gives users the ability to review a message in full before deciding to actually send it. The app gives users the option to set a certain amount of time before a typed text is officially sent to the intended recipient – a time-delay feature that allows you to look over your text again and gives you the option to cancelling it or revising its contents. On Second Thought lets you delay the sending of any text message for any amount of period up to 60 seconds. For example, if you set it for 60 seconds, you have 60 seconds to revise or cancel the sending of any and every outgoing SMS or MMS message from your phone. In many ways, it's similar to the Gmail Labs' “Undo Send” feature (which, I'm sure many of us can admit, has been a Godsend on numerous occasions).

Even more impressive is that On Second Thought offers a “curfew” mode – a period of time during the night when any and all texts sent from your phone can be withheld for your own personal review at a later time (such as the following morning). Basically, it's a feature that makes sure you'll never send another drunk text to that ex-boyfriend or -girlfriend of yours – and, I mean, how great is that?

What makes On Second Thought most convenient, though, is that it's not an independent messaging app like WhatsApp. While there are many great messaging apps out there that boast impressive features (e.g. Inbox Messenger), the mere fact that entirely new sets of conversations must be carried on in another platform is a complete turn-off. Why go through the trouble of having your friends install a messaging app when you guys can continue to text with each other in the normal fashion? What makes On Second Thought so great is that it works with your current SMS and MMS: people on the receiving end of your texts don't have to have the app installed, since they'll receive your messages just like every other text message they've ever received. The app is merely to help senders become more aware of what they're sending.

On Second Thought won first place at last year's SXSW pitch competition held by the Kauffman Foundation and UpGlobal. It released its Android beta this past December and is currently working on their iOS release.