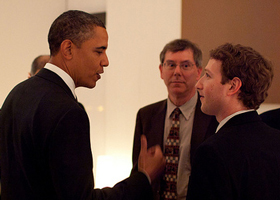 As we covered yesterday, President Barack Obama scheduled a somewhat top secret meeting with the Silicon Valley elite yesterday evening on the west coast. Today official White House photos taken by Pete Souza were released to confirm the meeting did indeed take place. One of the photos is a seated toast with the group while the other photo shows President Barack Obama talking with Facebook founder and CEO Mark Zuckerberg and Art Levinson, Genentech Chairman and former CEO, before a dinner in Woodside, California.

In the dinner photo (below) President Barack Obama is seated next to Steve Jobs on his left and Mark Zuckerberg on his right. President Obama is toasting to the group and we wonder what his toast consisted of. Help us ad lib his toast and win a little prize for your efforts. Leave us a comment below and we'll select the “most creative toasts” and send you a case of Brisk Ice Tea to quench your thirst for rele

asing your inner creativity. If making a toast is something you are unfamiliar with then you might want to take a look at the books How To Be A Gentlemen (page 92) or How To Be A Lady as they might offer you some insights. Remember the most creative and thoughtful toast in the comments below win.

A Toast To Silicon Valley Elite by Barack Obama