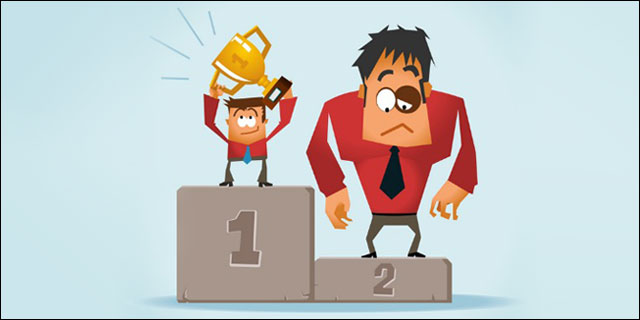 Google Adwords has been around for about 14 years and in those 14 years, Google has dominated PPC advertising. In 2013, Adwords surpassed 50 billion in advertising revenue.

Bing, Yahoo, and other PPC advertising platforms have tried to court advertisers–but advertisers want to be where the traffic is. Currently, Google has at least 67 percent of search traffic.

Facebook has had some success with PPC advertising but it hasn’t been a big challenger to Adwords.

It’s not Facebook, or Bing, or Yahoo that worries Google. It’s Amazon! In October, Google Executive Chairman Eric Schmidt said, “Many people think our main competition is Bing or Yahoo…But, really, our biggest search competitor is Amazon. People don't think of Amazon as search, but if you are looking for something to buy, you are more often than not looking for it on Amazon.”

What do Amazon and Facebook have that will help them compete with Google Adwords?

Consumers can buy just about anything on Amazon. In May, Amazon reported a total active user base of 244 million. Imagine the buyer behavior data Amazon has from the millions of people who browse and shop there. Imagine the potential for ad targeting based on all that user data!

Amazon is working on its own PPC software and intends to place ads onsite, reportedly by the end of 2014.

No doubt, Google is paying close attention to Atlas, Facebook’s ad service that is poised to break down barriers to ad targeting and tracking. Because it doesn’t rely on cookies to track consumers, Atlas is able to track users as they jump from iPhone to laptop to tablet to whatever… allowing Facebook to track end to end performance of the ads. Atlas claims it can “connect online campaigns to actual offline sales, ultimately proving the real impact that digital campaigns have in driving incremental reach and new sales.” Advertisers will love that!

According to The Wall Street Journal, “Atlas is aiming squarely at Google’s DoubleClick, the dominant ad-serving, management and tracking tool for advertisers and agencies.” Facebook purchased Atlas from Microsoft last year for $100 million; Zuckerberg and friends are certainly anxious to find out if that was a wise investment.

In 2013, Google’s Eric Schmidt admitted, “The biggest mistake that I made was not anticipating the rise of the social networking phenomenon.” Google lost that one to Facebook. It would be quite a coup for Facebook to rise up as a big PPC competitor, the area in which Google excels. Atlas gives Facebook ads stronger footing, especially with the added ability to track the activity of and optimize feeds for a growing mobile audience. That alone could serve to boost marketers’ confidence in the service, and drive Facebook revenue as a result.

Though Facebook Atlas will likely come on strong, Amazon–with all the buyer data it has–may be in the best position to put a hurt on Google PPC.

Google has managed to keep Bing and Yahoo on the sidelines. But Facebook and Amazon may prove to be more dangerous. It would be nice if small businesses had a viable alternative to Google Adwords.

Chad Hill is the CEO of HubShout, a U.S.-based full service digital marketing firm and SEO reseller. Previously, Chad served as Business Development Director at America Online and worked in product management at FOLIOfn Investments, Intuit and the financial services group at American Management Systems. Chad holds a BA with honors from the University of Florida and an MBA with honors from Georgetown University.