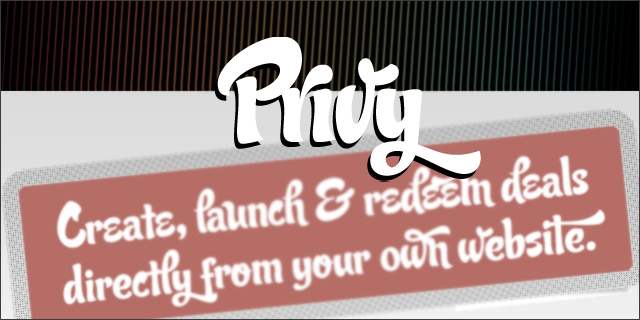 The rise of social e-commerce and “daily deals” have turned 3 year old startups Groupon and LivingSocial into revenue generating machines, and both are looking to IPO soon. It makes sense that daily deal sites have become so popular – people like to save money and merchants and small businesses can move inventory or just get their name out there.

But what if you were a merchant or small business, tried one of these social e-commerce sites, and were disappointed with the results? Could you offer your own daily deals on your own website? Neither Groupon nor LivingSocial currently offer a white label platform. Enter Privy, a product that enables small businesses to customize, deploy and track promotions across all online marketing channels.

Privy was founded in Boston by Ben Jabbawy, one of the founders of GPush, a top selling iPhone app; Josh Gan from Viximo, a social gaming and currency platform; Vadim Revzin from Yodle, and one of the founding team members of venture-backed Oasys Water. The concept came to them after talking to merchants who had run promotions with Groupon, LivingSocial and BuyWithMe and had negative experiences. Merchants shared concerns over lack of control over the promotions associated with their business, low-quality customers,  high-priced commissions, and, worst of all, they got zero contact information for the customers who bought their deals.

Currently in beta testing with 30 businesses in the Boston area, Privy makes it easy for customers to integrate with the platform. It creates a simple tab and overlay to display deals and offers, providing the retail customer with the entire flow, from the promotion itself to the credit card processing and back-end analytics.

We've seen other white-label, roll-your-own deal aggregators, like San Diego-based Deal Current, but Privy seems to offer a more integrated, turn-key solution. Pricing is a pay-for-performance model similar to ticketing sites like Eventbrite or PayPal; Privy takes a percentage of each sale (transaction fee).  To see an example of an integration with Privy, check out their customer Think Tank, a funky bar and restaurant in Cambridge (look for the “Deals” tab on the top right edge).

In talking with founder Ben Jabbawy, he had this to say of the current process and future direction of the platform:

“Right now Privy is working really closely with its beta customers so we can build an understanding of our customer base and use cases. Down the road, we can grow really fast without going door-to-door, because we're building a technology platform, not a marketing service.”

He went on to share that Privy is already thinking about integrations with a number of the major publishing and content management platforms out there. This is a smart approach, as a WordPress plugin that could add a simple “Daily Deals” offering to millions of websites could be a huge hit. So we're excited to see what Privy can do once it officially comes out of beta and offers its services to the public. In the meantime, check out the Privy demo video. 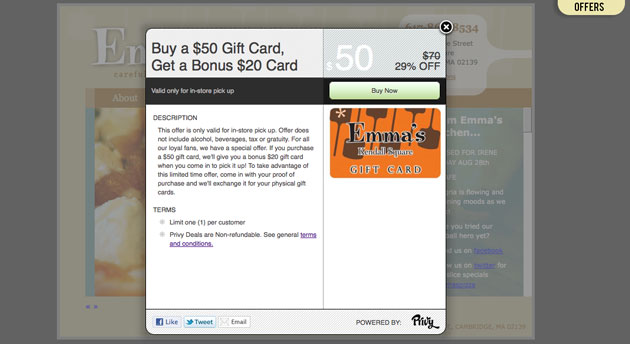 Privy will be a featured startup at the Boston Tech Cocktail event sponsored by Sprint this Thursday, September 1st at the Microsoft NERD Center in Cambridge.  Stop by and meet the team, and see the platform in action!