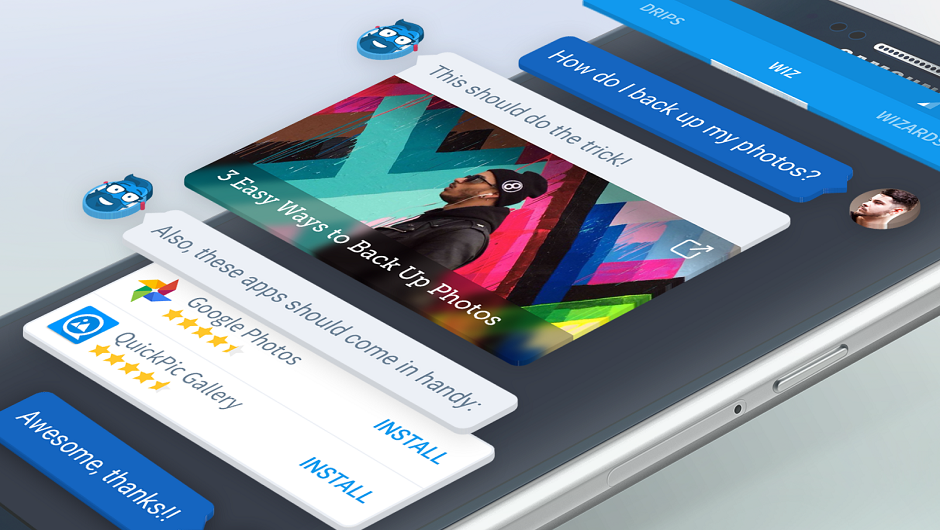 Chatbots are, increasingly, a thing. Major investments from Facebook, Google, Microsoft and Amazon in 2016 have proven that the concept will become a major player in 2017 and onward. But how large a player will it be? And what's the greater meaning behind the shift towards automated messaging apps, and even just messaging apps in general? I'm glad you asked.

Chatbots Are Hitting the Market

Drippler, a smart tech assistant app, announced earlier this month the launch of their tech support chatbot Drippler 3.0, designed to aid users in fixing technical issues on their smart devices while offering “personalized recommendations for useful tips and apps.”

The support service that comes with the app combined AI with humans, looping in a community of (human) subject matter experts with a wide range of tech support advice.

“We designed Drippler to help people make better use of their smart and connected devices,” said Matan Talmi, CEO of Drippler, in the company's press release. “Drippler 3.0 answers a need in the market by providing an alternative to the outdated tech support call center model that many companies still employ, which wastes time and causes unnecessary headache for consumers.”

The Internet Already Went From the Desktop to the Network Model

Chatbots definitely do help consumers “make better use” of their devices, as Talmi put it. But in order to understand the impact of messaging apps, we'll need to do an overview of the internet itself. That's right, we're going broad here.

The internet was once entirely desktops. Now, it's mostly social networks. But the future belongs to messaging apps. We'll tackle each in turn.

The internet used to be centered on desktops: You hopped on your clunky computer, listened to the dial tone and then typed in a web address in order to physically visit a site. You needed to care enough about the website to reach out and find whatever blog posts were new since the last time you visited.

Now the Network Model Is Turning Into the Messaging Model

The network model requires visiting a central hub: Facebook is by far the biggest hub. As The Verge wrote earlier this month, “The future of the media is almost entirely dominated by the dynamics of mobile platforms.”

The messaging model, however, needs no central hub: People can chat directly with the person they need. The messaging app reduces friction by avoiding the need for a hub. Entrepreneurs Arjun Sethi and Andy Artz described it best in an fascinating and in-depth Medium article on the shift. Here's a basic description of the messaging model, or the “hive” model as they term it:

“While networks like Instagram and Twitter are beginning to wear thin, messaging apps like WeChat are frenetic hives of activity that build economic empowerment. Like honeybee scouts, messaging apps decrease the friction of centralized nodes in the 1:1 communication between individual nodes and allow for emergent behaviors.”

Whoa @washingtonpost is sending live fact-checks via text to people who opt in. Very cool way to reach people while they watch #debatenight

But how do entire businesses interact with consumers through messaging apps? With AI. The friction-lite person-to-person network also allows for a data-to-person relationship, as long as the AI is capable enough to respond to queries quickly and accurately. In the future, expect to see the internet at large begin relying more and more on messaging apps, AI or otherwise.