Each year the Consumer Electronics Show hits Vegas and deposits a big dollop of cutting-edge tech on its door stop. From TVs to self driving cars, laptops to smart cookers, we're spoiled for choice with revolutionary products and features vying for attention and headlines.

Then there are the left field items that have left us scratching our heads, such as smart plant pots and rocket boots, to name some examples from the past.

Naturally, the 2019 CES is no exception, and it has delivered a veritable bounty of weird and wonderful gadgets that will raise eyebrows. These include robot pals, cat toilets and a smart door designed to beat parcel thieves.

We take a closer look at some of the more unusual gadgets that have caught our eye this year.

Lovot – The Robot that Wants your Love

Lovot is a robot from Japanese company Groove X, and they describe their product as a ‘home robot that stirs your instinct for love'. There's no denying they're cute little guys. Measuring about a foot and rolling around like a fat Porg with a security camera attached to its head, the Lovot has a soft body that is designed to make it more appealing to touch. It's a companion, first and foremost, rather than a utility.

Its applications are explained in promotional videos on the Lovot site. In one, an elderly man cradles his Lovot and whispers sweet nothings in its ear. In another, two Lovots silently watch a baby sleeping, before it wakes up screaming for its mother, presumably believing it's been cast in a horrifying episode of Black Mirror.

The two Lovots flap excitedly as the mother comforts the child. The aim of the Lovot, according to the blurb, is to make you a better person every time you interact with it. Your mileage may vary.

The Lovot will be available in late 2019, although it ain't cheap. Starting at 349,000 Yen, it's over $3,000 dollars. You could buy a lot of affection with that sort of money, and not necessarily from a robot. 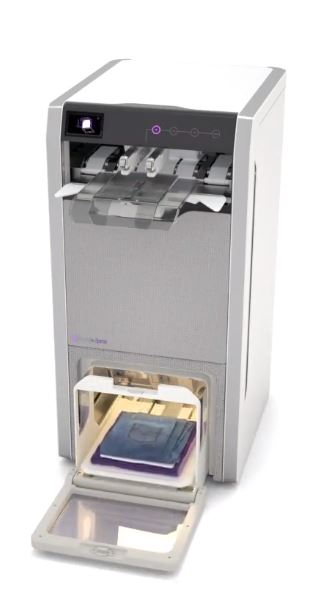 Foldimate – A Machine that Folds your Laundry. No. Really.

Thanks to Netflix's ‘Tidying Up with Marie Kondo' show, in which a world-renowned ‘tidying up expert' helps people reorganize their lives by reorganizing their houses, clearing up is very en vogue at the moment. That's good news for the makes of Foldimate, who have designed a machine with just one purpose – to fold your clothes into neat little piles.

Bizarrely, this isn't even the first clothes folding machine that has graced CES. Last year's show was host to Laundroid, a monolithic, $16,000 device that could fold one t-shirt in ten minutes. It used AI to assess each item of clothing and decide the optimal folding pattern.

By comparison, the Foldimate is a much more sober proposition. For starters, it's around $980, and can supposedly fold an entire load of laundry in the time it took the Laundroid to fold one shirt. It's also considerably smaller than the closet-sized Laundroid, although it's hardly discreet. To give you an idea of size, imagine the industrial laser printer in your office was relocated to your home, and instead of printing spreadsheets and monthly reports, it folded your clothes. You've just imagined Foldimate.

It's still in the prototype phase, but the company expect it to be available by the end of 2019. 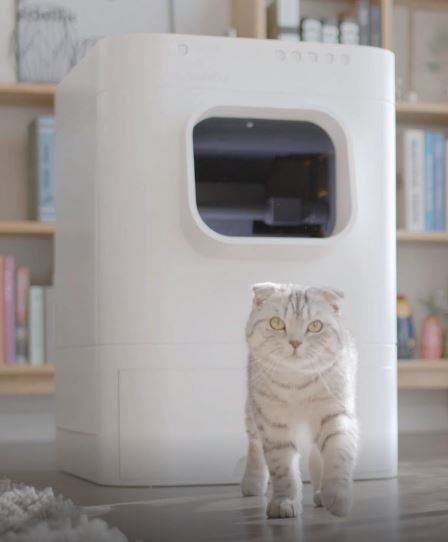 time, removing the laborious task from pet owners, reducing arguments, and perhaps even saving relationships. There can't be many people who eagerly await the opportunity to clean up their feline's deposits, so in this regard, Purrsong have found a genuine sales opportunity.

It's claimed that Lavviebot only needs to be cleaned every two to three weeks, with the waste deposited into a trash bag in a dedicated drawer, which can be pulled out and removed. A 6.5 liter tank holds the fresh kitty litter for the next drop.

Of course, it's accompanied with an app, which monitors the device and can be used to pre-order more litter. It will also send you a message when the Lavviebot needs cleaning, which has to be the ultimate disappointing notification to get on your phone if you're waiting for a Tinder match or retweet of your latest hilarious meme.

Like the Foldimate, the Lavviebot is not an insignificant size. It's around the same dimensions as an under counter refrigerator, although if you own a cat, chances are you've already given up half your house to it anyway.

Purrsong will reportedly be starting an IndieGoGo in April 2019 for the Lavviebot, with prices starting at $379. 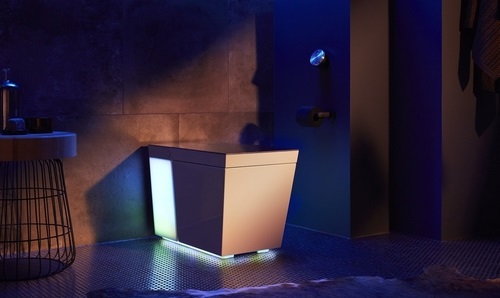 If you're thinking ‘Why should cats have all the fun?!', then we've got good news. You too can experience a smart toilet, with the Numi 2.0. Manufactured by Kohler, the ‘intelligent toilet' can automatically open and close its lid, warm the seat, bathe you in ambient lighting and flush on command.

It's also Alexa enabled, so you can listen to the news or catch up on a podcast while you carry out your business. You can also order toilet paper, which could be a handy feature in extreme emergencies (next-day delivery notwithstanding).

For anyone who has ever visited Japan, the range of features might seem somewhat archaic – it's long been acknowledged that Japan has their toilet game on lock – but for Americans who want to catch up, the Numi 2.0 could well represent the future of the porcelain throne.

The Numi 2.0 is part of Kohler's suite of connected bathroom appliances, which also includes a smart bath, shower and mirror. The Numi 2.0 toilet is expected to be available to purchase at the end of 2019, starting at $7,000.

eDOR – The Door that Eats your Packages 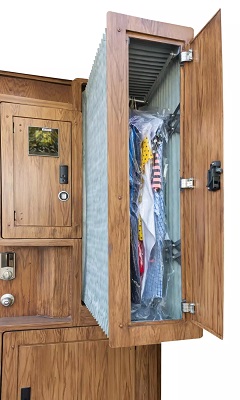 There's been a spate of news stories in recent months about people lifting packages left on door steps. It's becoming something of an issue, with thieves unable to resist the allure of an Amazon branded box, left unattended on the stoop. Of course, they've no idea what's actually in there – it could be the next delivery of Lavviebot litter, but regardless, people's parcels are going missing at an alarming rate.

The eDOR has a series of panels on its front that open up when a delivery person approaches with a parcel, by communicating with their smart device and verifying the delivery. When the panel opens, it extends into the house, creating a cubby hole that the package can be left in. It's enclosed at the back, so there's no fear of anyone crawling through to try out your Nuvi 2.0. With the package inside, the door automatically locks the hatch, and alerts you that a delivery has been made. There are even thinner, longer hatches for dry cleaning.

eDor takes your security pretty seriously. Larger packages are attached by a retractable tether from the front of the door, and when pulled on by a thief will alert the police and alarm a siren with flashing lights.

eDOR sets out to solve a problem that is becoming more prevalent as more and more of us shop online rather than at the mall, but it doesn't seem a perfect fix. How would you use the door in a narrow hallway? Wouldn't the packages block your entrance to the house? And wouldn't tether alert mishaps waste police time? eDOR is set to go into production later in the year, although no pricing is available at this moment.