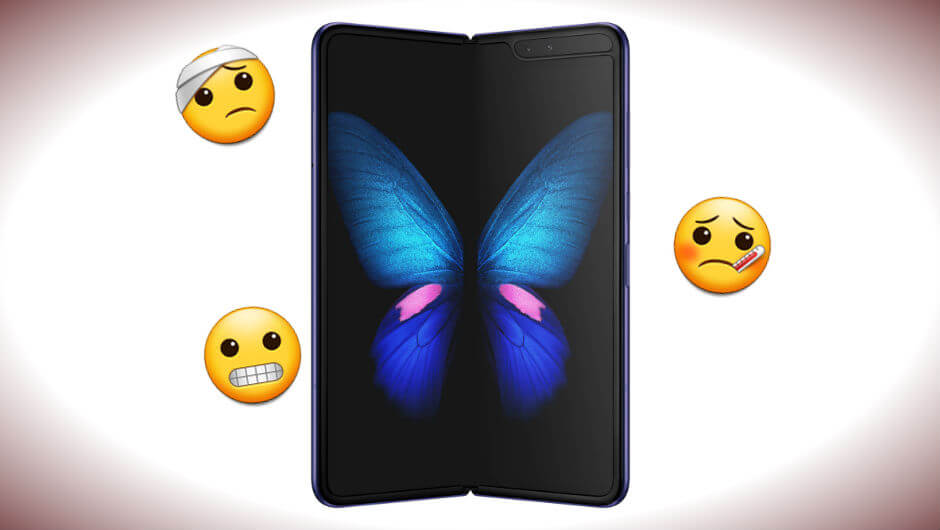 The Samsung Galaxy Fold isn’t even on sale yet, but already reports are circulating of the device breaking after days or even hours of use.

Limited numbers of the Galaxy Fold phone, which is due to hit the shelves on April 26, have been released to the media. But, some of these handsets have reportedly been experiencing complete failures. This isn’t a good look for Samsung, or the burgeoning foldable phone category as a whole.

Concerningly, the faults are related to the folding screen as well as its hinge mechanism. So, what is going on with the Galaxy Fold?

Why is the Samsung Galaxy Fold Breaking?

There seem to be two issues with the Samsung Galaxy Fold, based on the handful of reports we’ve seen.

First, as experience by a number of media outlets, the screen appears to be completely failing after its protective film has been removed. The second issue, as experience by The Verge, seems to be more serious — a piece of debris worming its way under the screen and, again, causing a complete failure.

The review samples released to members of the media included a protective film over the front of the folding screen. Most new phones have similar protective films included in order to prevent scratches appearing on the screen. Most people remove them as soon as they open the box, and there’s nothing wrong with that.

According to Samsung, though, this film was slightly different:

“The main display on the Galaxy Fold features a top protective layer, which is part of the display structure designed to protect the screen from unintended scratches. Removing the protective layer or adding adhesives to the main display may cause damage. We will ensure this information is clearly delivered to our customers.”

This “protective layer” goes beyond preventing scratches, then — it’s a crucial part of the display’s structure. Hence, it’s pretty confusing that Samsung would design it to be so easily peeled off.

I got this far peeling it off before the display spazzed and blacked out. Started over with a replacement. pic.twitter.com/ZhEG2Bqulr

The last sentence in Samsung’s statement is also telling. According to the reviewers, there was no notice that the film shouldn’t be removed. Instead, reviewers simply assumed it was a regular scratch-preventing film.

However, according to Todd Haselton from CNBC, the screen on his Galaxy Fold review unit also broke, despite him leaving the film on.

Samsung is coming to pick up our broken Galaxy Fold review unit. But before they do, I just want to reiterate that we never removed the special film from our review unit. It is fully intact, as these images show. pic.twitter.com/zoeGELWBiN

When The Verge got their hands on a Fold, everything seemed normal. However, after a while, their reviewer noticed a small bump underneath screen.

After a while that bump grew, and eventually caused a complete screen failure. According to The Verge, the phone was treated no differently to any other review sample they have.

Samsung issued the publisher with another Galaxy Fold and took the broken device away for inspection. However, the Korean company was unable to offer any explanation for why the screen broke, or how the debris got in the phone in the first place.

Should You Hold Off Buying a Samsung Galaxy Fold?

We’d say it's probably not worth risking almost $2,000 on the Fold phone at the moment. The screen protector issue seems to have something of a solution – leave yours on, and it should be fine. That said, if the protector peels off with relative ease, there’s no telling how long it will stay on during normal use.

The debris issue, however, is definitely concerning, and Samsung has yet to clarify how susceptible the phone will be to debris entering the display.

Samsung has had issues with phone reliability in the past. Remember the explosion-prone Galaxy Note 7 from 2016? Though it was hugely embarrassing at the time, Samsung responded in style, and kept to its upward trajectory as a truly innovative smartphone manufacturer. Still, this initial bad press for the Fold is far from ideal for such new tech.

We’ve had some slight reservations about the Galaxy Fold since it was announced, however. Folding displays are bleeding-edge technology at the moment and, as with any first-generation technology, it’s going to have teething problems.