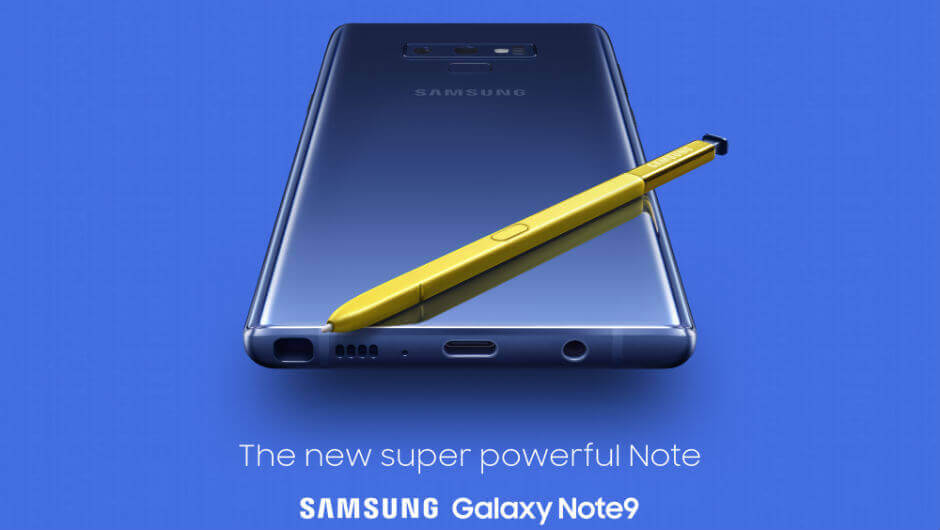 Samsung has announced its new Galaxy Note 9 flagship smartphone, plus a new Galaxy Watch smartwatch. We round up the headline specs and features for the new Samsung Note 9, including when it’s expected to be available and its likely costs.

The new Note 9 phone has a large 6.4-inch screen that's edge-to-edge. It packs in a powerful processor, plus a new cooling system to help it cope with high-end apps and games (we're looking at you, Fortnite). It has a dual-camera for superior snaps, with an expanding and contracting aperture mechanism. It'll be available from 24 August in in Ocean Blue, Lavender Purple, Copper, Midnight Black, though pricing isn't yet confirmed.

We run through the headline specs and main claims of the new Samsung Galaxy Note 9, below.

After a smartwatch? Click here for more detail about the Samsung Galaxy Watch launch.

Samsung Dex (connects your phone to a display)

Update (08/03/18): Samsung inadvertently posted a Note 9 pre-order page on its website, as was spotten by Evan Blass, also known by his Twitter handle @EvLeaks. 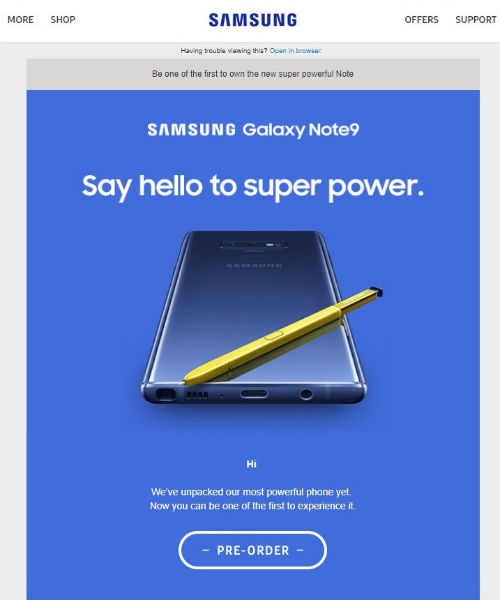 This new update confirms some of the rumors we've detailed below, including the headphone jack, USB-C charger and the side-by-side dual cameras with fingerprint scanner just below.

First up, we know for sure that the Note 9 will be announced on August 9, during the Unpacked live event, which starts at 11am EST/ 8am PST. The signup boxes on Samsung’s website say “Sign up to hear about the next Galaxy”, we’d quite happily bet our Tech.co office on the Note 9 being unveiled at this event.

We also know already that the Note 9 will feature a nifty stylus – all the Note phones have to date, and this is a key differentiator between the Note and S ranges. This should make note-taking and drawing, for example, a piece of cake.

We don’t, however, anticipate any major design differences. According to leaked renders of the Note 9, it’ll be virtually identical to the Note 8 (as you can see below – the Note 8 is on the right, with the Note 9 on the left), with all the changes taking place under-the-hood. So while we can anticipate a faster processor and potentially an update to the operating system. 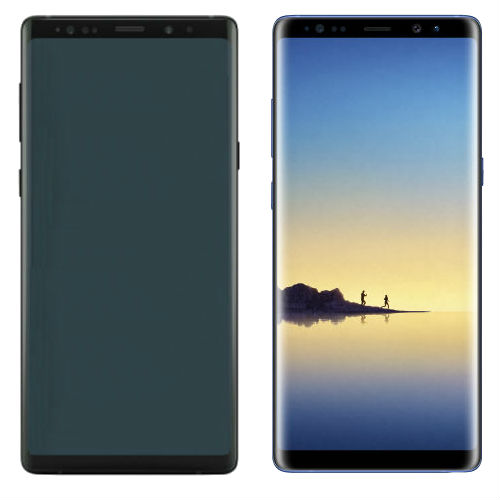 Of course, leaked renders aren’t actually images of the final product. However, leaking a render which is exactly the same as the Note 8 seems almost pointless – unless someone is playing an elaborate practical joke. Or they’re actually telling the truth.

According to leaks based on factory computer-aided design, the Note 9 will apparently come with dual cameras, a USB-C port and a 3.5mm headphone jack – just like the Note 8.

Samsung itself seems to be pitching the headline feature of the Note 9 being a long-lasting battery. It posted a video on its YouTube channel in late July seeming to throw some shade at Apple about battery life issues, before teasing the the Unpacked event on August 9.

In fact, in the video’s description, it states “On August 9th 2018, power will no longer be a problem #Unpacked”. It seems pretty certain that the Note 9 will have a sizable battery – maybe 4,000mAh – a lot larger than the Note 8’s 3,300mAh offering.

We’ve spoken briefly about storage above, but we haven’t mentioned RAM. A well-known leaker called Eldar Murtazin has claimed that the Note 9 will be available in three configurations – either 6GB RAM and 128GB storage, 8GB RAM and 256GB storage and 8GB RAM with 512GB storage.

Traditionally, the largest and most powerful versions of Samsung’s devices have been reserved for the Korean and Chinese markets, and while some reports have claimed it will come to Europe, we wouldn’t be your house on it. Again, a video from Samsung has mentioned storage size, but considering that all Samsung devices since the S6 have come with micro-SD card slots, we wouldn’t read too much into this.

Heading back to cameras again, Murtazin has claimed that the Note 9 will have the same variable aperture as the S9 and that the optical stabilization appeared to have been improved. 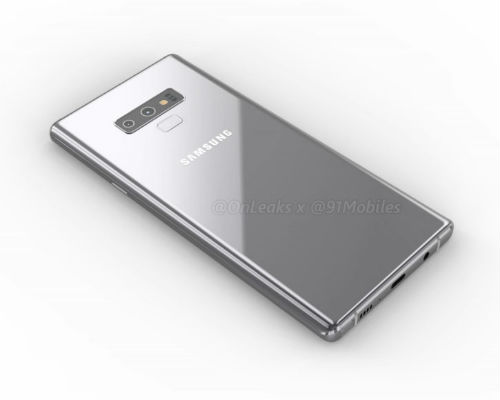 Combined with the dual cameras, which are mounted side-by-side in the Note 9 renders, unlike the over-and-under cameras for the Note 8, this should make the Note 9 a great choice for Instagram-junkies.

This is going to get a bit, well, techy, so bear with us. All the way back in March, a phone appeared on the Geekbench processor benchmarking database known as the Samsung SM-N960U. Given that the Note 8 was given the model code SM-N950U in the US, it would seem likely that this phone is the upcoming Note 9.

This phone appeared to be slower than the S9+, although there has been a more recent Geekbench entry with the model code SM-N960X which achieved single core and multi-core scores of 4089 and 12246, respectively, compared to the S9+’s 3362 and 8673.

These newer scores still leave it below the iPhone X for single core speeds, despite being slightly higher for multi-core speeds. It’s also worth noting that these scores would make the Note 9 the fastest Android phone out there, besting the S9+ and OnePlus 6.

Again, a video from Samsung teasing the Unpacked event specifically mentions phone speed – so it’s likely to be pretty speedy. There are also rumours that Fortnite will be exclusive to the Note 9 on Android, at least when it launches, so both Samsung and Epic will be looking to make sure it runs as smoothly as possible.

All told, it doesn’t look like the Note 9 will be a completely revolutionary device. Samsung is working on a lot of high-tech innovations for smartphones, from bendy screens to foldable ones. As well as in-display fingerprint scanners and cameras for a truly notch and bezel-less phone. However, it seems to be early days for this tech and it would be very surprising if these came to the Note 9.

Note 9 Release Date – When Will it Go on Sale?

According to a report from DigiTimes, we should expect the Note 9 to go on sale in “early August”, rather than late August, like the Note 8. Potentially, the Note 9 could be on shelves by next week.

Digitimes quotes a source apparently involved in the supply chain for the Note 9’s components – which would suggest that their source is on the money. However, it says that this accelerated rollout of the Note 9 has nothing to do with Samsung seeking to strike while the iron’s hot.

Instead, the South Korean giant is feeling the squeeze from Chinese competition, including Huawei and Oppo – forcing it to bring the release of the Note 9 forward to ensure it arrives with market-leading features.

However, it seems odd that Samsung would be fretting so much about a Sino-Korean smartphone arms race, considering its dominant position in its home market and sizable market presence around the world. Plus, it has a major leg-up in the U.S. market, where Huawei phones are blocked from sale.

We’re not 100% convinced on this early release date, but that’s not to say we won’t be pleased if the Note 9 arrives in the first half of August.

Note 9 Price – How Much Will it Cost?

Phones nearly always cost more than their predecessors, and launch prices often bear no relation to the deals you can get a month or two down the line.

Samsung have confirmed that the 128GB Note 9 will be priced at $999, and available from AT&T, Spring, T-Mobile, US Cellular, Verizon Wireless and Xfinity from the 24th August, both online and in-store.

The 512GB version will be available from AT&T, T-Mobile, US Cellular and Samsung.com, and will cost $1,249.