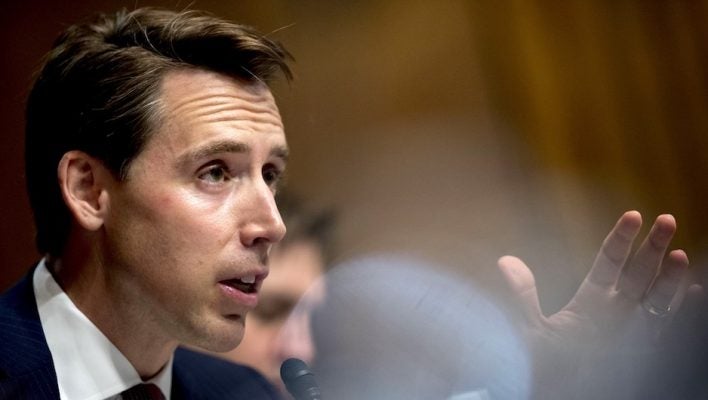 Today, a Senate subcommittee held a hearing to investigate TikTok, specifically its Chinese parent company and how it may be affecting user data within the increasingly popular social media platform.

China and the tech industry have an admittedly complicated relationship. For one, a number of influential tech companies build nearly all of their products in China, and dozens of incredibly popular apps are subsidiaries of Chinese companies. To make matters even more complex, trade wars and human rights violations continue to make business relationships strained at best.

Now, one senator in particular is digging into these ties between China and the tech industry, and it resulted in a pretty one-sided hearing.

What was the Senate hearing about?

The hearing — exhaustingly titled “How Corporations and Big Tech Leave Our Data Exposed to Criminals, China, and Other Bad Actors” — was chaired by Senator Josh Hawley (R-MO), who has become the tech industry's most pointed critic in recent months. He's introduced a number of bills aiming to fight everything from social media addiction to bias against conservatives, which has drawn him quite a bit of criticism from the rest of his colleagues on Capitol Hill.

Hawley took the opportunity at the hearing to lay out, as clear as day, his thoughts on the relationship between China and the tech industry, specifically TikTok and Apple, who were asked to be in attendance by the subcommittee. And he cited everyone's least favorite social media CEO in the process.

“If you don't know what TikTok is, you should,” said Hawley in his opening statement. “[TikTok is] a Chinese-owned social media platform so popular among teens that Mark Zuckerberg is reportedly spooked.”

Once he had everyone's attention, Hawley didn't hold back when it came to TikTok's Chinese parent company, launching into a diatribe similar to that of a 1980s anti-drug commercial.

“A company compromised by the Chinese Communist Party knows where your children are, knows what they look like, what their voices sound like, what they're watching, and what they share with each other.”

All that grandstanding, tragically, fell on deaf ears though, as the guests of honor were not present for the hearing at all.

Were TikTok and Apple in attendance?

Before the Tuesday afternoon hearing, TikTok and Apple respectfully declined the invitation to appear before the subcommittee. Apple neglected to respond at all, while ByteDance — TikTok's Chinese parent company — cited the lack of notice for their inability to show up.

“We appreciate Sen. Hawley’s invitation,” said a spokesperson for ByteDance to the South China Morning Post. “Unfortunately, on short notice, we were unable to provide a witness who would be able to contribute to a substantive discussion.”

TikTok did, however, provide a statement from general manager Vanessa Pappas to set the record straight on how the popular social media platform operates in regards to its Chinese ownership.

“No governments, foreign or domestic, direct how we moderate TikTok content — that is left in the capable hands of professional content moderation teams led by our U.S.-based team,” wrote Pappas. “TikTok does not remove content based on sensitivities related to China (or other countries). We've never been asked by the Chinese government to remove any content, and we would not do so if asked.”

While that statement may sound convincing, it's hardly a far reach to question the motives of a tech company in 2019. The industry has been fraught with security breaches and data scandals, spurring antitrust investigations on what feel like a weekly basis. And considering China's questionable track record when it comes to tech, it's safe to assume the worst when it comes to these kind of security threats.

Is China that much of a security threat?

Senator Josh Hawley would certainly have you believe they are, as he made abundantly clear in response to TikTok's statement at the hearing on Tuesday.

“TikTok claims they don't store American user data in China,” said Hawley. “That's nice, but all it takes is one knock on the door of their parent company based in China from a Communist Party official for that data to be transferred to the Chinese government's hands whenever they need it.”

The thing is, he's not entirely wrong. From censoring search results to questionable data practices, the country has hardly garnered much trust when it comes to the security of personal information. Plus with over 1 billion users — 60% of whom are between the age of 16 and 24 — TikTok could represent a serious weak spot for online security if China does decide to stick its hand in the user data cookie jar.