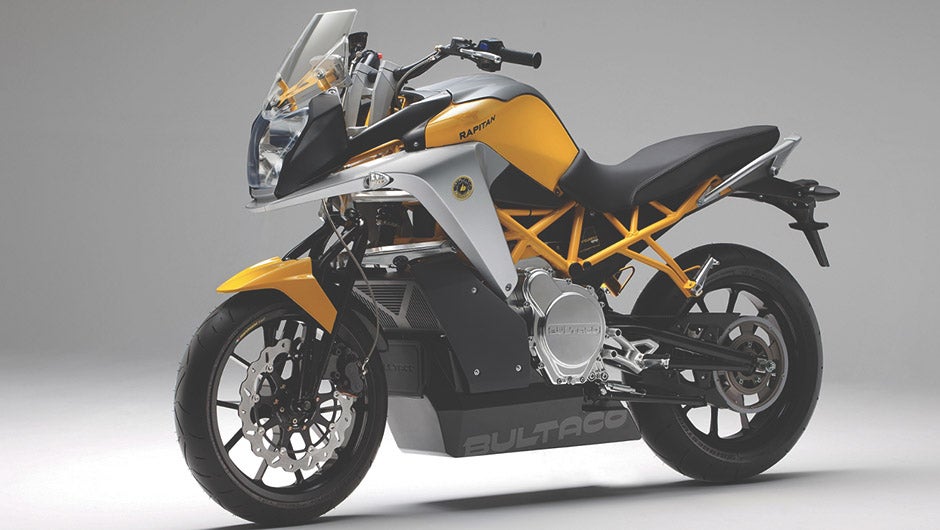 When most people think of motorcycle companies they usually think of names like Harley-Davidson, Indian, Honda, Kawasaki, BMW and a few others. The name Bultaco, however, is usually not among them. Bultaco is a motorcycle company headquartered in Barcelona, Spain, that specialized in two stroke motorcycles from 1958 and then closed down completely due to market pressures in 1983. That's the main reason why so few have heard of the company: It has been out of business for over 30 years. But all of that changed in 2014 when the company name was revived to be a company that specializes in making all-electric motorcycles. It's new flagship motorcycle, the Rapitan, impresses in every way.

Bultaco didn't hold back with its reintroduction of the brand in any way. The new Rapitan is a highly capable sport bike that was designed to compete head-to-head with the best currently on the market. Except it does so with electrons instead of gasoline.

The Rapitan looks very similar to many other sport bikes. Squint just a little and it bears a striking resemblance to a Ducati Monster 1200 R. Its futuristic styling complements its futuristic technology and capabilities nicely.

The Rapitan is much more than just a sharp-looking bike. It is a highly-capable motorcycle as well. It was designed from the beginning to be competitive with the best gasoline-powered bikes that money can buy. It's specs are impressive: It has a very powerful motor. With a torque rating of 125 Nm, its 40 kw electric motor can easily keep up with and even outrun many of its competitors. The torque and power of the electric motor is roughly equivalent to that produced by motorcycles with 1,000 cc engines.

The Rapitan's capabilities don't end with its powerful electric motor. The all-electric sport bike also has the ability to regenerate up to 25 percent of the electricity it uses through regenerative braking. And while many riders of electric bikes worry about how far they can go on a charge, range anxiety isn't much of an issue with the Rapitan. The bike averages about 200 kilometers between charges, more than enough for most riders' needs. And with its fast-charge capabilities, riders can easily and quickly recharge the bike's batteries while out on a road trip.

In addition to the Rapitan, Bultaco also has a variation of the bike that is designed specifically for racing. Called the Rapitan Sport, it is designed with the same motor and electronics of the Rapitan except that it is built on a racing chassis. It also comes with a high-performance battery pack, which Bultaco refers to as an “Endurance Pack,” that is very similar in design to the ERS systems used in Formula One race cars.

The Rapitan and Rapitan Sport will be available starting at the end of 2015. The price for either bike has yet to be announced. Although the Rapitan's specs are very impressive when compared to its gasoline-powered competitors, it will have to be similarly priced to be competitive on the market. Until prices are announced (which should come very soon), we'll have to wait and see.