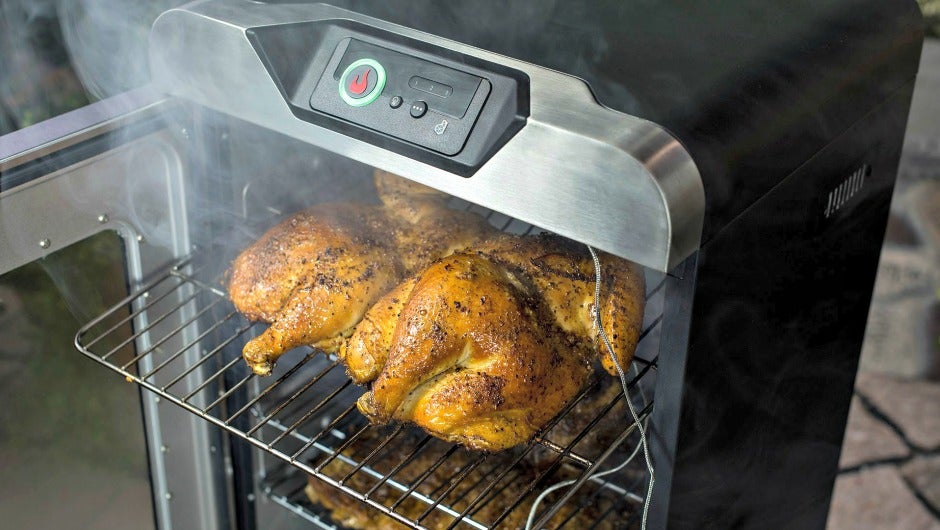 During the spring months one of my favorite things to do is to sit back and enjoy an evening outside with friends around a grill. Whether you prefer good ole-fashioned charcoal, Hank Hill-style propane, or enjoy the slow-cooked smokey approach, most grills haven’t changed; however, one traditional grilling brand is starting to change all of this.

One of the common issues with technology is that organizations go out of their way to add unnecessary features to established products. From screens in your fridge to WiFi-connected tea kettles, sometimes technology doesn’t add value, but rather a distraction. For Char-Broil, their approach is entirely different when it came time to implement their new SmartChef line of smokers.

After over a year in development and after working with both new and experienced smokers, the team released their first wave of SmartChef connected smokers. Char-Broil began having conversations over two years ago about the Internet of Things and how they can incorporate technology into their products. According to Char-Broil Product Manager Dan Corso, there simply hasn't been a lot of innovation in the grilling and smoking industry. Sure, there are some connected accessories, but that is only one piece to the puzzle.

“We saw some companies trying to capitalize on it with accessories. It didn’t make sense as we make the actual cooking product, so we could build a more complete product,” said Corso. “We could tie that into our actual product. The advantage we have there is controlling the entire experience. Bluetooth is very limited, and we have the ability to control the heat source in a lot of cases, that really allows us to engineer the experience. For beginners, helping set up the smoker, to the advance smoker to customize the settings. Being able to control the whole experience. The app allows the user to choose how they interact with the product.”

Having used both of Char-broil’s latest SmartChef connected smokers and associated app, it’s evident that the team found the median between all grilling and smoking skill levels. Unlike their traditional or electric models, they are also able to take this feedback and continuously update their firmware and product.

“We are constantly updating what’s there. The project is never really done, it’s ongoing as long as people are using it,” said Corso.

In addition to new technology, this is also Char-Broil’s first jump into a mobile application. They partnered with a group in Portland, OR that shared the mindset the team was looking for, and – above all – was not just creating a remote in app form. “Their system provided an intelligent, self-correcting and updating system that had a lot behind it,” said Corso.

In its current form, the app has a cloud-based recipe list that can be updated in real-time. The programming lives in the app, which tells the smoker how long to cook, when to add wood chips, and when the food is done. It also includes a temperature readout using the built in probe. For those more interested in using a select set of features, the smokers also include a manual mode and preset modes.

For Corso and the Char-Broil team, there are primary reasons why their foray into a connected smoker makes sense:

Aside from Char-Broil's SmartChef smokers, the following grilling and cooking gadgets are on Tech.Co's Spring Gadget Guide as must-haves for a successful BBQ party or simply to enjoy the weekend:

Digital Electric Smoker with SmartChef Technology: Rather than ridiculous layers of technology that negatively affect your cooking experience, SmartChef is focused on enhancing the process. From guided recipes that have been true tested by Char-Broil, to a spacious cooking environment that can fit a party's worth of meat, to it’s wifi connected base that allows you to monitor temperature from anywhere with a connection, the Digital Electric Smoker with SmartChef Technology is designed to create juicy, flavor smoke meats. This unit also features a larger wood chip capacity which results in longer smoking times. Price: $400

The Simple Smoker with SmartChef Technology is the smaller version to the Digital Electric Smoker. While both use the same technology, this particular unit is a bit smaller. We’ve also nicknamed it R2Meat2 as it has some semblance to R2D2. Every 45-60 minutes that you want the smoker to continue producing wood flavor will require a replacement of the wood chip supply, and you have a basket system for cooking less portions. It also includes a smaller container to cook vegetables towards the end of the smoke session. Price: $300.

Maverick’s ET-735 Bluetooth BBQ thermometer is a tech savvy take on your typical grilling thermometer. Rather than a basic probe connected to hardware or a radio signal being sent from one device to a receive, this particular unit connects directly to your phone. Using Bluetooth, you can now monitor the internal temperature of your meat from a distance away. This particular unit can monitor up to four meats at once. Price: $90

Want a wood fired grilled flavor without creating a stationary outdoor oven? Traeger pellet grills are a combination of grill and smoker. It’s the combination of electric and traditional, but requires a hands-on approach to cooking.

Not a fan of bluetooth? Maverick’s wireless food thermometer works like it’s newer version, but also packs in more range.

Another contender for city life cooking, the Kenyon electric is an advance grill designed to be smokeless and prevent flare ups.

Using cooking stone technology, the Bakerstone is an easy to use pizza box that you simply place on top of any three burner or larger gas grill. It can also be used to cook various other foods such as cookies or steak.

For city dwellers and those who are otherwise not allowed to use a grill, this is a simple, easy to use solution. It also features the typical fat draining system that George Foreman is known for.

Similar to the Bakerstone, the Kettlepizza uses your existing kettle or charcoal grill to cook a flavorful pizza.

Fridge Fresh By Berry Breeze a small, battery-operated machine that lives in your refrigerator and extends the life of fresh produce and leftovers. It emits a consistent level of activated oxygen to neutralize bacteria by inhibiting ethylene gas that triggers decay. Plus, it deodorizes the fridge as it works.

Where to Find the Gadgets