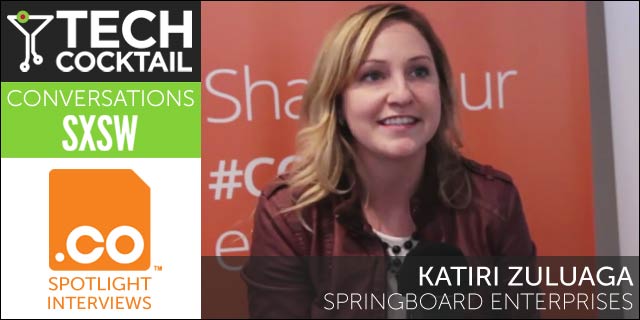 The video below is part of an interview series we did at SXSW 2014. Our SXSW Startup Celebration was sponsored by .CO, CEA, Revolution and LivingSocial. We thank them for their support!

It has been over 50 years since the President's Commission on the Status of Women was established under President Kennedy's New Frontier and led to the official end of discriminatory policies affecting women in the workplace (most notably, through the Equal Pay Act of 1963). Despite the relatively vast period of time, women today earn 23% less than their male counterparts, and hold only 4.6% of Fortune 1000 CEO positions. Further, this inequity is translated into a 40% lesser chance at receiving funding for female-led startups.

“When you look at the statistics in the US about women-led businesses and where we are as a gender, we have a lot further to go…,” said Katiri Zuluaga, the Community Manager at Springboard Enterprises.

Springboard Enterprises commits itself to helping women entrepreneurs find the support and funding that they need to successfully grow their startups. Their accelerator program focuses specifically on connecting female founders to the necessary growth experts, coaches, and venture capital networks to ensure their product development and expansion.

Below, Zuluaga talks about how Springboard is helping female entrepreneurs find funding, what the company has accomplished for women-led startups, and the importance of community to their company. Here's the video.