Smartphones are the primary tool used to engage with the digital world. Thanks to increased performance, better battery life, improved wireless networks, and an infinite marketplace to connect developers and consumers, the shift towards mobile-only is not just a trend but a reality. So, why does it feel like more power and better apps have not lead to a greater mobile experience?

The record books are littered with attempts to find a way to bridge the gap between phone and laptop – to bring greater functionality to the ultimate symbol of portability. Companies have tried adding accessories, curving screens, or even making the whole thing modular. But one way or another, these attempts feel contrived, and we haven’t even mentioned the failure of tablets.

Entrepreneur Brent Morgan feels the same way and believes the key issue is that we're pursuing mobile innovation in the wrong places. As an engineer out of UCLA, Morgan has built circuitry systems for orbiting satellites and renewable energy drives for wind and solar tech. Now with his new product, Superscreen, Morgan has turned his attention to the mobile industry, where he is devoted to building a peripheral device that makes your smartphone more capable and versatile than anything that has come before.

In a market full of underwhelming features and experiences, Superscreen proposes to be the most significant device of them all due to its simple purpose: unleash the power of your smartphone. Most mobile tech requires cords and dongles to make them function. Or even worse, it relies on screencasting technology that is dependent on a WiFi network.

This is where focused innovation is key. Superscreen does not just mirror, but rather transmits raw data to give you complete wireless control of your smartphone on an independent 10.1-inch Full HD display. It's the world’s first portable touch screen for your smartphone.

“[Superscreen uses] high performance hardware communications circuitry in a precise layout along with proprietary software on IEEE 802.11 protocols to transmit data between the Superscreen and the user's smartphone,” Morgan explained.

The result is always-on secure access to your phone, Android or iOS, up to 100 feet away without the need for WiFi or a data carrier. The tech leads to zero lag or delay in data transfer between devices. So forget about syncing cloud storage over WiFi. Snap a picture on your camping trip with your fancy iPhone 7 camera, then immediately pull out your Superscreen to edit the photo on a larger HD display – all without any syncing, because the image never left your phone. 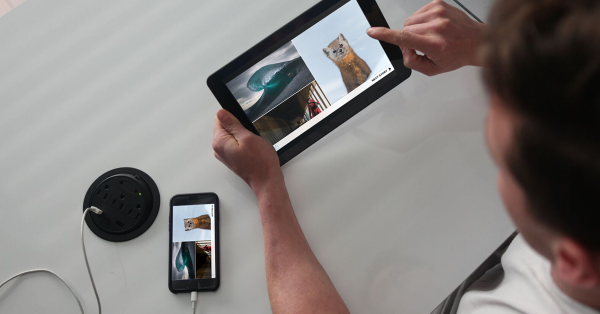 Using the device leaves you with a sense of unnerving familiarity– full wireless control of your iPhone on a non-Apple device is a first. However, in minutes, you explore apps and tasks that you would never consider doing on you small mobile screen. And Morgan will tell you that this is his goal.

“Everything about Superscreen has been designed to help you get the most out of your smartphone experience, not to add another upgradeable-device or feature to your life,” said Morgan.

Samsung, Apple and Google have so far fumbled through taking the smartphone experience and making it bigger. It might sound simple, but maybe that’s what this industry needs – a nudge of innovation that forces us to rethink our priorities in this mobile-first age. Keep an eye out for Superscreen as it prepares to launch on Kickstarter in mid-March.