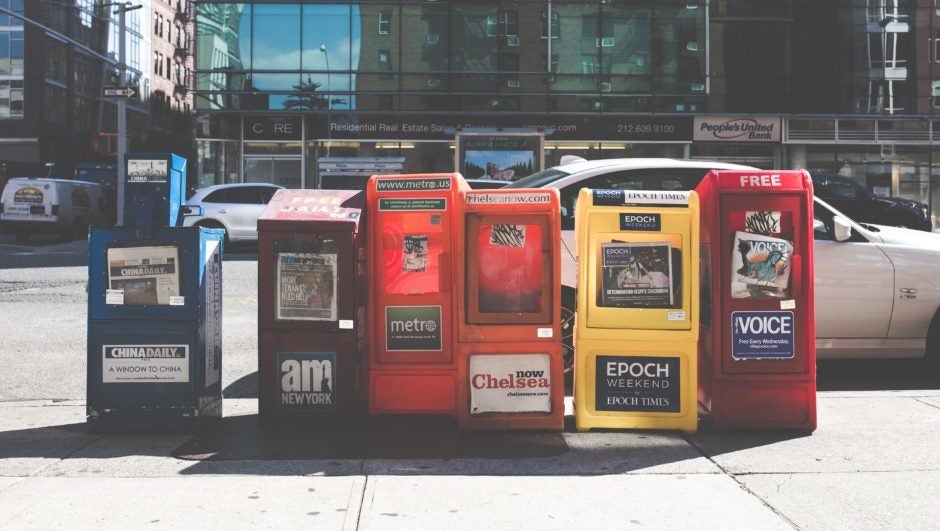 Subscriptions are doing a lot better thanks to post-election anxiety.

Since advertising continues to freefall, that's welcome news for the journalism industry. They're still headed towards a risky, deathly transition from one model to another, but at least it finally appears that they'll have a firm ground to plant themselves for the future.

If you do the math, that's bad news for journalism. Consultants are realizing which direction ad revenue specifically is going, as Columbia Journalism Review explains:

“Bernard Gershon, a consultant in the media business, says he now tells content-producing clients to do subscriptions, or at least a subscription hybrid, but never just advertising. ‘Free is a four-letter word,' he says.”

Plenty of legacy media companies still rely on advertising for a hefty chunk of their revenue, and that chunk is shrinking fast. New York Times CEO Mark Thompson, speaking at Monday's annual UBS Global Media and Communications Conference, found a colorful way to explain the direction that print ads are heading

That print ad revenue, down double digits in 2016 Q3, is now roughly a fifth of the NYT's total revenue. Including digital, ad revenue is at 37 percent, a major drop from the 75 percent the paper's ads once pulled in.

Election anxiety is taking the New York Times in a different direction: subscriptions. They hope to hit 10 million eventually. Here's Ken Doctor, writing at Politico, with the numbers:

“As the full meaning of a Donald Trump presidency preoccupies American minds, The New York Times has seen a more-than-tenfold increase in daily subscription sign-ups, far surpassing any other news medium.

In fact, on a number of individual days since the election, more than 10,000 new subscribers have offered up their credit cards – which would be almost 20 times the rate of subscription sign-ups just a year ago.”

While the Trump bump can easily settle down, for now it's affecting plenty of news operations. ProPublica’s donations also hit “about 10 times the rate that we’re used to,” according to president Richard Tofel, as did Mother Jones' donations. The Atlantic's subscriptions rose 160 percent. John R. MacArthur, president and publisher of Harper’s Magazine, mentioned the effect during a conference last week, saying:

“With the election of Trump, which of course is a horror, we're seeing a huge spike in subscriptions. And we're already organized around this principle of being the leading opposition magazine.”

Startups Have the Edge

Sadly, most legacy news media companies can't make up their lost ad money with just one bump in subscriptions. But as subscriptions become more common, media startups will benefit the most.

After all, there's just one type of news company that doesn't have to slowly pivot away from an ad revenue model: the type of company that is just starting up. Startups have the chance to develop a world-class reporting and analysis site on a specific niche, and then charge a premium subscription fee for it.

Jessica Lessen's tech site, The Information, is one example. A year's membership includes conference calls and events, and costs $399. Politico cofounder Jim VandeHei has a new media organization, Axios. The subscription price? VandeHei doesn't see himself as “super intrigued with a subscription less than $10,000,” and even spoke up against The Information's pricing, saying it needed to shoot higher:

“There isn’t much difference between $400 and $800. For a mid-range subscription, price is more elastic than people think.”

Not all flashy new-media startups are taking the subscription route — The Outline, launched on Monday, will rely on advertising — but at least the model now has an array of media companies increasingly invested in it, with no signs of faltering thus far.