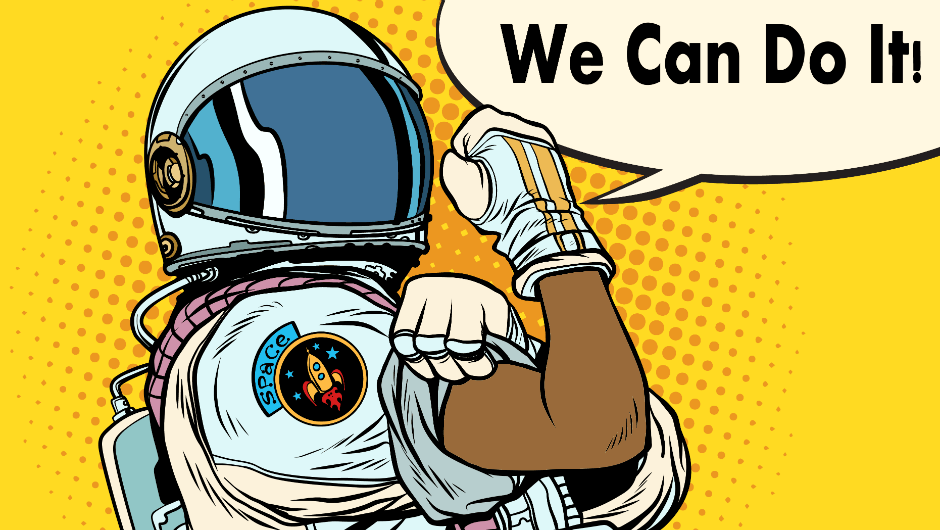 The 2018 sci-fi and fantasy Hugo Awards were handed out last weekend. The highest profile winner, for Best Novel, was NK Jemisin, who had also won the same award the previous two years. Jemisin made history as the first author ever to win three years in a row. Of course, as the first African-American author to win a Best Novel Hugo at all, she was becoming used to making history.

The Hugo Awards, first established in 1954 and announced during an annual ceremony at the World Science Fiction Convention (that's WorldCon to you), are kind of like the Oscars for science fiction and fantasy literature. Awards range from the best short story and best novella to the best semi-pro magazine or the best fan artist.

So how did an awards platform — particularly one with a long-time core membership of white baby boomers — get diversity recognition so right? And can the tech industry, which has its own well-documented issues of sexism and racism, learn anything from the Hugo Awards?

For all its mind-boggling concepts and utopian ideals, mainstream twentieth century science fiction literature has hardly been immune from racism and sexism. Many of the famed sci-fi authors of the era wrote female characters dismissively at best. Here's one line from Arthur C. Clarke's 1968 novel, 2001: A Space Odyssey:

“Like all his colleagues, Bowman was unmarried; it was not fair to send family men on a mission of such duration. Though numerous ladies had promised to wait until the expedition returned, no one had really believed this.”

And that's one of the least offensive quotes from the selections available here.

The attitudes spilled out into fandoms of the time, naturally. Isaac Asimov was widely known as a serial sexual harasser by the early 1960s, using his stature in the community to keep others from speaking out. Even the Hugo Awards' namesake, famed magazine editor Hugo Gernsback, wasn't averse to “benevolent” casual racism. In one 1964 column, he speculated that futuristic technology could dye black people's skin white, “thereby removing a basic source of friction” and essentially solving racism.

In 2015, the World Fantasy Convention agreed to stop using a bust of H.P. Lovecraft as the model for its award, following a campaign calling out the author as an “avowed racist”. Yet, that same year, the Hugo Awards saw an anti-progressive backlash that should be horribly familiar to anyone who's heard of the video game industry's Gamergate movement.

How did the Hugo Awards shift back to highlighting diverse voices? And is there any chance the tech industry can learn the same moves?

The tech industry, after all, remains predominately white and male to this day. A major UK study found that 91% of working engineers are male and 94% are white. Meanwhile, at tech conferences, even women's restrooms tend to remain empty.

Here are a few tips the tech industry can take home from the last few years of the Hugo Awards.

Know When to Pivot

Any business or community hoping to survive needs to know how to change, especially when that change involves eating a little crow. Staying humble is essential. It's also a struggle for the clichéd tech CEO, who has an ego with the turning radius of an ocean liner.

WorldCon's original 2018 plans showed a lack of concern for marginalized members of their community. First, they misgendered a finalist, and then their choice of panellists was criticized for a lack of diverse voices, despite the fact that there were plenty to chose from. Initial responses from WorldCon workers weren't great, either: One email shared by best novella finalist JY Yang argues that the “new” generation of authors are “exciting to the nominators but completely unfamiliar to attendees” – a chicken-vs-egg argument that breaks down once you point out that the attendees probably enjoy expanding their knowledge of sci-fi and fantasy.

Thankfully, WorldCon changed quickly. The event's Chair apologized within days, saying that they would be “tearing the program apart and starting over.”

What led to such a quick turnaround? The sci-fi and fantasy authors themselves were largely responsible, which leads us to possibly the biggest takeaway.

Change Comes From the Leaders

Change starts at the top and moves down. While this is the most obvious in a work environment — who doesn't want to keep their boss happy? — it's just as true in a community environment like WorldCon. Without the genuine support of leaders in the science fiction and fantasy author community, good intentions might not coalesce into actual change.

The backlash to the initial 2018 panel roster is an example of speculative authors putting themselves on the line in order to help those with fewer voices in their community. Authors who decided to pull out of the event entirely if the roster wasn't amended included JY Yang, R. Lemberg, Sarah Gailey, and Alexandra Rowland. John Scalzi offered his panel seat to a lesser known author. Mary Robinette Kowal offered to bring in a team of fixers to revamp the panel schedule, and WorldCon took her up on it.

The lessons for the tech industry should be obvious. CEOs and PR reps need to focus on making a change, not simply rattling off platitudes. Meanwhile, everyone in the company with the power to shift their boss's opinions should speak up about it. Yes, that's easier said than done, but it truly is the best way to affect a meaningful change.

NK Jemisin's threepeat of a Hugo win didn't happen because she was a diversity chip. It happened because her Broken Earth series blends genres, world-building and a character-rich plot in a totally unique way.

“Failing to foster diversity creates a gap in capitalizing on the unique perspectives and entrepreneurial spirit that women of color bring to the table,” says Eaton-Cardone. “Leveraging diversity in business puts businesses ahead of their competition — the more diverse viewpoints and backgrounds in the workplace, the more collaboration and consequently, the more consumers one can attract.”

The always-futuristic tech industry and speculative fiction fans have a lot in common. They're both centered on how changes to the world we live in can affect how we live our lives. Sure, for sci-fi fans, those changes look more like teleportation and faster-than-light travel, and for techies the changes are more like autonomous cars or rentable scooters on every street corner. But, the distinctions between the two tend to blur as time goes on.

Science fiction may sometimes predict the future, but it more often simply reflects the present: how social values are shifting, and what unexpected stories can emerge from marginalized perspectives. But why listen to me when NK Jemisin put it so much better in her record-setting award acceptance speech this past weekend:

“I look to science fiction and fantasy as the aspirational drive of the zeitgeist. We creators are the engineers of possibility. And as this genre finally, however grudgingly, acknowledges that the dreams of the marginalized matter and that all of us have a future, so will go the world. Soon. Very soon.”

Most Recent
Explore More See all news
close Building a Website? Get 50% off Wix premium plans until August 11th Claim 50% Off