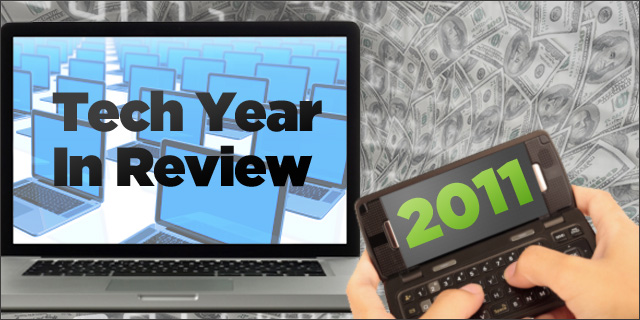 Another year has flown by with lots of technology innovations to excite and challenge the way we communicate, transact, discover and interact with the world around us. While we look at the micro-innovations and new businesses that sprout up daily and the people behind those businesses, we also look at the macro-trends that shape these new technologies, sites and apps. So let’s look back at some of the biggest trends of 2011 and then look ahead to 2012 and what it might bring to bear.

Group Texting
We began the year with a handful of group texting applications launching, gaining traction and getting lots of attention as they enabled anyone to communicate with groups via simple text messaging or a mobile application. The early front-runners were Beluga and GroupMe, so it was not surprising to see them both acquired before the years end. Beluga was acquired by Facebook and later turned into Facebook Messenger while GroupMe was acquired by Skype. Apple rolled out group messaging as part of its latest iOS 5 release, which could become a standard for many, and even AOL has released group messaging via its popular AIM service. Many other competitors entered the marketplace, but due to high costs, attrition and consolidation have limited their lifespan.

Social Networks Continue To Explode
Google Plus launched and grew quickly with the early adopter crowd. Facebook revamped their profiles and features, and launched an iPad app, Twitter evolved their activities, and smaller offerings like Instagram exploded with millions new users posting photos and sharing experiences. MySpace was sold to Specific Media, a group of investors which included Justin Timberlake and the popular bookmarking service Delicious was not shut down but sold to YouTube founders Chad Hurley and company. StumbleUpon continued to grow and in some reports was considered to account for the largest amount of social sharing. Path relaunched at the beginning of December to capture early adopters attention to make private sharing your day with a small group via you iPhone a daily addiction.

Location Services
Geo-location has remained a hot topic for the past few years as mobile phones have added the ability to leverage GPS in most applications. Check-in services were the frontrunners leveraging geo-location data and leaders like Foursquare and Gowalla battled it out as Facebook, Twitter, and Google Plus also added location features this year. Gowalla eventually changed direction to offer more guides and tours, reducing their focus on check-ins before selling to Facebook. While other apps like Urbandig launched to offer unique location-based guides. The bigger story here is how ubiquitous geo-location enhancements have become outside of check-in services, adding to everything from geo-location based reminders (iOS 5 feature) to budget alerts based on location (HelloWallet). Location based deals also became a hot trend in 2011 as “daily deal” companies like Groupon and LivingSocial created apps to find deals wherever you might be.

Social Commerce & Mobile Marketplaces
As we wrote about in a previous issue of the Social Media Monthly Magazine, 2011 saw an explosion in mobile marketplaces such as Zaarly, Goshi, Taap.it, Skyfer, Grabio and so many others. Yet they are very early in their development and are just starting to become a trend as they look to compliment and potentially replace the behemoth web versions we have known for years like eBay and Craigslist. At the same time, social shopping sites like Pinterest and Buyosphere, which offer social bookmarking tools and/or other visual tools that make sharing things you want to buy easy, have been cropping up on a regular basis. On the mobile front, apps like Want and Shall I Buy offers tools to take photos of items you want and then share them with potential buyers. All these social shopping products serve as an interesting new way to discover new, unique products to buy.

Socializing Food
Everyone has to eat, and given the evolution of food-television and marketing in general, the industry has a glamorous and profitable appeal. So it is no surprise that food related social applications have taken a strong position in the marketplace and 2011 was certainly the year of the food app. From sites and apps that help you order out, like Grubhub, Seamless, Omnom, and sites like Foodzie for more artizen food items, to finding recipes with Gojee, Feastie, Yummly, Punchfork, KeepRecipes and many others, and finding food around you with AroundMe, UrbanSpoon, Yelp, Foodspotting – which have all been on the market prior to 2011, but updated and joined by newcomers like Oink, to other food related sites and apps that help you connect with others, navigate food aisles, solve diet issues, and more – there is no end in site to this popular trend (or this very long sentence).

Gadgets
There have been a slew of new gadgets that make social networking and social media more easy to access from anywhere. Android tablets like the Samsung Galaxy Tab, Sony Tablet S and Amazon’s latest set of Kindle products like the Kindle Fire that begin to blur the line between ereaders and tablets, have all entered the market. HP made quite a stir when they discontinued their tablet, the HP TouchPad, then created a buying frenzy when the remaining inventory was unleashed at  deep discounts on the market. Beyond tablets, where the iPad2 still rules the market, Apple also rolled out the iPhone 4S which included some new social features within iOS 5, like the built in Tweet functionality, hands-free socializing thanks to Siri (the voice activated service on the Apple 4S) and more. Of course, the Apple iPhone 4S release-frenzy was quickly sobered by the loss of Apple’s founder and leader, Steve Jobs.

Tech Accelerators & Programs
2011 saw spectacular growth and adoption of tech accelerators programs, where startups apply to be part of a program that will nurture their idea with a number of mentors, provide seed money and then help see them off with hopefully a better model and plan then when they entered (for more information, Tech Cocktail published the first ranking of start-up accelerators which ranked the top 15 accelerators in the U.S. for 2011). New accelerator programs such as 500 Startups grew tremendously, while top programs like TechStars and YCombinator announced ubiquitous funding for all program grads. In addition, we saw a frenzy of new programs encouraged by the “Startup America” partnership. Efforts like the Tech Stars Network, Startup Weekend, Lean Startup and more helped facilitate massive growth and organization of the tech landscape around us, encouraging innovation, business and creativity no matter where you are located.

IPOs
On May 19th social network LinkedIn made it’s initial public offering – kicking off a trend of tech companies filing for an IPO. Companies like social commerce giant Groupon, locally-focused recommendations company Yelp, and others all filed to become publicly traded companies on Wall Steet. But this is only the beginning – we expect this trend to continue as a number of other companies have filed to IPO in the coming months and year. We expect to see Facebook and LivingSocial among them.

Subscription Based Service s
We also saw subscription-based mail order services take rise as investors jumped on this winning business model. Startups like Birchbox, which sends out a monthly curated box of luxe beauty samples to BabbaBox which delivers a monthly box full of unique children's activities and all the supplies and videos to make them, Lost Crates which offers a treasure trove of notebooks, pens, and desk accessories and newcomer Umba Box offering a fun selection of handmade products each month from Etsy, including jewelry, bath products and more have taken the commerce scene by storm. For foodies, popular site Foodzie now delivers a selection of artisan foods each month, while Lollihop offers something similar for healthy snacks.

Mobile Money
In 2011 we really saw mobile payments take off as more businesses adopted technologies such as Square, Dwolla, Intuit’s GoPayment and the more recently launched Google Wallet. These innovations will continue to evolve and draw a lot of attention as they aspire to change the way people handle money. Given this powerful and lucrative industry, and how impactful the innovations can be on business and society, this is an exciting space to watch.

Assuming the Mayan Calendar is incorrect and 2012 goes off without a massive apocalypse, we can assume another year of technology advancements affecting our mobile, social world. Of course, we can’t look at 2012 and not take into consideration that it’s a huge election year before us. We suspect another “tech election” will bring out more startups and technologies that focus on social government and participation, politics and fundraising. Other areas in tech that have started to blossom and will surely bloom in 2012 include Health, Education, Social Good and the further maturation of many of the 2011 trends like Accelerators, Mobile Money and Payments and Communication. With the explosion of startups in 2011, we will watch closely for market consolidation across various areas, with more mergers and acquisitions, but also at IPO filings and glamorization of the industry. For example, in 2012 will mainstream media focus more on this sector as Bloomberg TV did in 2011?  We think it will.