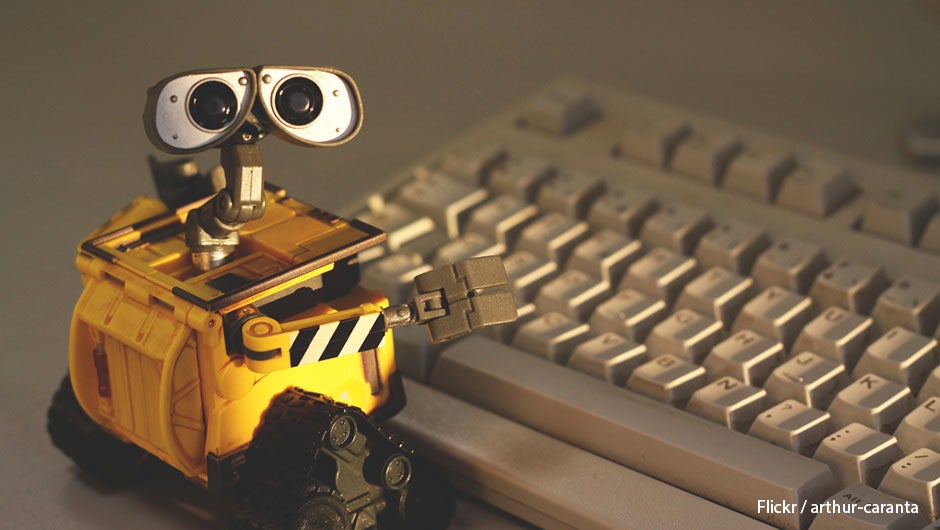 Should you be worried about losing your job to robots or automated technology? If not, then maybe you should be. I mean, we're now living in an age where artificially intelligent robots have the ability to recognize faces and human emotions, and where more and more companies are integrating workload automation technologies to improve their overall performance. In a recently published Medium post by Durham, NC-based Automated Insights, the company's head of communications, James Kotecki, laid out six job security tips in our age of automation.

Automated Insights offers organizations like The Associated Press and Yahoo with their Wordsmith technology to automatically transform raw data (like quarterly earnings reports) into human-like written stories. According to Kotecki, Automated Insights offers automation that actually benefits human workers – giving, say, reporters at The AP to focus on more investigative stories. He points out, though, that the same can't be said about all automation.

“But even though we don’t take jobs, our technology is part of the broader automation trend reshaping the nature and scope of human work,” writes Kotecki. “Every week, it seems, robots and algorithms disprove once again that ‘only humans can do x' — whether x is driving a car, understanding a photograph, or writing a story.”

A survey conducted earlier this year by the U.K.-based Expert Market looked into whether people would be okay with having robots in the workplace. The results showed that 70 percent of managers would definitely consider using a robot on their work teams. Furthermore, many of those who participated in the survey said that they'd feel pretty comfortable replacing their human staff with machines – with 47 percent admitting that they wouldn't feel guilty about “hiring” a machine over a human.

The results speak volumes about the potential for automation's increased role in the workplace and what that can mean for job security. In the same survey, 68 percent of people believed that a majority of their work could be performed by an automated system or robot. There's a lot of uncertainty on the future of work, but it's obvious that one should anticipate an increased role of automation. Writes Kotecki:

“While no one really knows what the future of holds for workers, it doesn’t take much foresight to grasp an essential truth about work: no matter your industry, the future won’t look like the past. Approaching the job market with traditional assumptions about your professional value is career malpractice.”

In the Medium post, Kotecki offers six job security tips to better prepare workers for a world of automation.

1. Any task that feels robotic can be replaced by an actual robot.

“This is great news for workers who have better things to do, like the AP reporters freed up to do more investigative reporting. This is less exciting for workers whose entire job consists of robotic tasks. So don’t get a job doing rote data processing if you’re looking for a long-term career.”

“Original thinking, contextual understanding, and one-off creative tasks (like, for instance, writing this article) are hard to automate. Jobs requiring those skills will probably stick around for a while…As a rule of thumb, the more human your job feels, the safer it is.”

3. Humans still need to build and program all of these automated systems.

“Venture capitalist Marc Andreessen says, ‘software is eating the world,' and that makes it a growth industry for the foreseeable future. Our Wordsmith platform’s abilities, for instance, ultimately rest with the creative humans who build, maintain, and configure it.”

“Wordsmith recently raced NPR reporter Scott Horsley to write an earnings story about Denny’s. Wordsmith was faster, but Horsley’s story had breakfast jokes…If Horsley let Wordsmith write the basic story and then added his jokes, the duo would produce an engaging human story at super-human speed. In fact, that’s essentially what happens in the AP newsroom, where human reporters add additional context to the stories that Wordsmith produces.”

5. Big companies can be big risks.

“Job security in many of today’s large, established companies may be nothing more than an illusion, as such companies find it impossible to adapt to technological changes before it is too late. News of mass layoffs may become more commonplace as entire divisions become non-viable.”

“After all, even businesses that are largely automated need someone to build and own them. According to a recent NPR report, Chief Executives have just a 1.5 [percent] chance of being automated.”

Earlier this year, Automated Insights was acquired by Vista Equity Partners and its portfolio company STATS. If your startup is considering automating any of its business processes, consider reading this article. You can read Kotecki's piece, “Get a Job They Can't Automate” on Medium.