Twitter has often found itself under attack for the way it handles provocative tweets from high profile accounts, and now, in a post on the company's blog, it's vowing to do something about it.

The company is publishing new guidelines for how it will manage controversial and damaging tweets- effectively, labeling them and removing them from certain feeds.

The move doesn't just affect Trump – it actually applies to any popular government official on the platform, although he's likely to be one of the hardest hit by the move if previous tweets are anything to go by.

What are the New Measures?

The company revealed details of its new safety measures in a blog post on Thursday. Tweets that break Twitter's policies will now be flagged and hidden by a warning message, before users can view them. 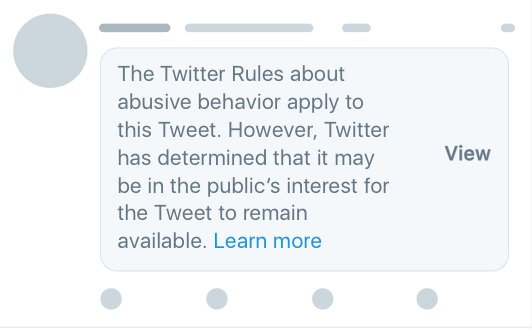 The post formalizes Twitter's position on rule-breaking tweets from government officials, which it acknowledges in the past it has left up as they ‘spark public debate'. Twitter CEO, Jack Dorsey, has alluded to this before, notably when he was on the Joe Rogan show and stated that Trump's tweets were ‘newsworthy', and therefore important to publish.

Twitter is hoping that by flagging content with a label, explaining that the content breaks its rules but is in the interest of public discourse, it will appear more transparent in the way it handles such tweets. It already employs similar labeling for ‘sensitive content', and this seems the next logical progression.

As well as being labeled, rule-breaking tweets will also feature less prominently on the platform. That means that they won't show in safe search, notifications, or live events pages, thereby narrowing the likelihood of them being seen by the Twitter audience.

Twitter already has a long list of rules about the content and behavior it allows on its site, although high profile accounts are allowed a lot more leeway than the average user. When Trump is threatening an entire country with annihilation over twitter, it gets a pass, but should you threaten a neighbor on the platform, you can expect your account to be shut down and a knock at the door.

Twitter has stated that a team of individuals across its Trust and Safety, Legal and Public Policy departments, as well as regional teams, will determine if a tweet is a matter of public interest or not. Given how vocal some government officials are on the platform, they might have their work cut out. The criteria they will use to assess whether or not to take action, in their own words, is:

Who Will be Affected?

Those affected are in a small minority. There's a stringent rule set that Twitter is applying to those that can break its rules, as long as it's ‘in the public interest', and chances are you're not included. Those that are included, however, are government officials (or those that are being considered for a government position), that have 100,000 followers, and are verified. Twitter hasn't spelled it out in the blog, but presumably this applies worldwide.

Critics would argue that anyone who breaks Twitter's rules should be reprimanded accordingly, and that the new system simply makes exceptions for the more powerful. While the move is intended to make Twitter appear more accountable, it still gives government officials a lot of leeway.

Twitter has said that the move won't be retrospective, and will only apply to tweets going forward.

How will this Affect Trump?

This move from Twitter isn't Trump-specific, but it's hard to imagine that he won't be affected by it. The President is no stranger to controversy on the social media platform, and Twitter does seem to let him get away with a lot. When asked once what action Twitter would take if Trump threatened to kill a journalist, a move that would see a ban for any other user, Dorsey replied ‘We'd certainly talk about it'.
When, and it seems a matter of when more than if, one of Trump's tweets is flagged, it's unlikely to go down well. Both Republicans and Democrats are already paranoid about tech companies skewing data to favor one particular party, as seen in December of last year when it called Google in front of congress to investigate the issue of political bias in its search results. Democratic congresswoman Zoe Lofgren asked the Google chief executive why a picture of Trump appeared when users Googled the word ‘idiot'.

I am continuing to monitor the censorship of AMERICAN CITIZENS on social media platforms. This is the United States of America — and we have what’s known as FREEDOM OF SPEECH! We are monitoring and watching, closely!!

When Facebook banned far right figures such as Alex Jones and Milo Yiannopoulos from its platform in May of this year, Trump took to Twitter to state that he would “monitor the censorship of AMERICAN CITIZENS on social media platforms”.

Whoever Twitter slaps with its first notification is bound to be upset, and it's unlikely that Twitter's move is going to be seen positively by those most affected.