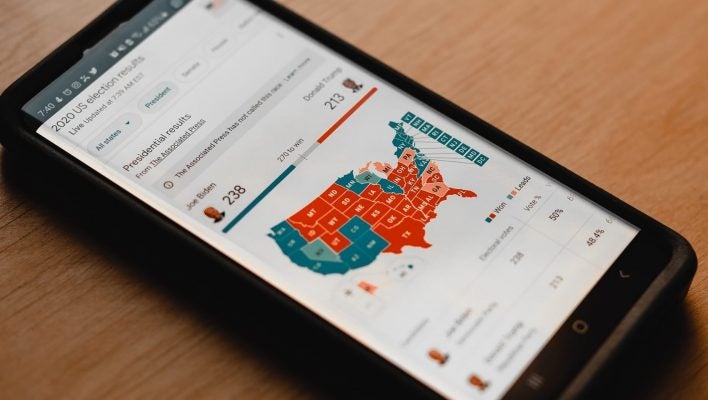 A new study has found that some of the apps that voters have used for election information may be potentially misleading, and even pose a security risk.

Android users were found to be the most at risk, with 95% of the offending apps on that platform.

Some of the apps were found to originate from countries with looser privacy regulations than the US.

Of the 182 election apps scrutinised by cybersecurity firm RiskIQ, it was discovered that 152 were fraudulent or malicious. This means that although these apps claimed to be authorized by the government or state, they were nothing of the sort.

The report found that 87 of these fraudulent apps were based in the US, but many were found to be from countries with different standards of privacy regulation, such as China and Panama. While it’s relatively easy to raise complaints against the US-based apps, those from outside the US are likely to prove much more difficult to take action against and remove.

Only 1.2% of the fraudulent apps found originated from the main online stores such as Google Play or the Apple App store

The RiskIQ findings also reinforce the message that you should only download apps from the official store for your device. Only 1.2% of the fraudulent apps found originated from the main online stores such as Google Play or the Apple App store. The vast majority came from other sources, such as smaller app stores with poorer security measures.

Android users were found to be the most at risk from fraudulent election apps, with the platform attracting 95% of the fraudulent apps.

The end result of downloading one of these apps is that the user could be fed misinformation, potentially from foreign agents looking to disrupt democracy, or could even have their device compromised and their data stolen.

While these figures may seem alarming, with a little precaution, it’s possible to protect yourself, and your devices, from rogue apps like these.

Only use the official app stores

As this study demonstrates, it’s much harder for malicious apps to exist on the official platforms such as Google Play or the Apple App store. There are tighter security regulations, and those that are found to have security issues are removed quickly. That’s not to say that these stores are infallible, but they are certainly the most secure place to download apps.

When you install an app for the first time, it’s likely that you will be asked to accept certain permissions. This is perfectly usual. However, keep an eye on exactly what the app wants to have access to. If you can, decline all permissions, but if the app states that it needs certain ones to operate, sense check the request. Don’t accept any permission requests that you don’t feel comfortable with.

One of the giveaways of particularly aggressive malicious apps is that they can chew through your mobile data, as they steal your information. Check on how much data your apps are using. If you spot any that seem high, especially when not being used, treat with suspicion.

Check the App Developer on the Store

It always pays to do a little bit of your own research if you’re really not confident that an app is legitimate. All apps on the official app store (we’re only using official ones, remember?) will list the developer. Take a look at the other apps they provide, as well as a Google of the company, just to put your mind at rest.

We live a large chunk of our lives online, and that’s never been truer than in the past year, with many of us working, socialising, shopping and entertaining ourselves using the internet more than ever before.

This increase in internet use hasn’t gone unnoticed by scammers and hackers, and there is evidence that we’re seeing more cyberattack than ever before. The FBI Cyber division has stated that complaints are up 400%, and Interpol has called the rise in cyberattacks on corporations and governments ‘alarming’.

Luckily, there are measures you can take to protect yourself when online. Anti-virus software can identify and stop any malicious viruses before they infiltrate your device. Another great method of online defence is a VPN. No longer the reserve of cyberpunk fiction, VPNs have become a valuable tool for any internet user. Some businesses are actually insisting that their workers use a VPN when connecting to their internal systems, aware of the level of protection that a VPN affords.

We’ve tested VPN software, and know that the best ones can mask your identity online, offering excellent protection, and all for a just a few bucks a month.