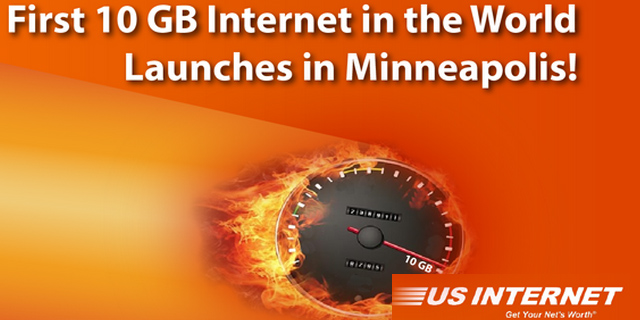 It was recently reported by Tech Times that Minneapolis, Minnesota will be the first city in continental America to get 10 GBPS (gigabits per second) internet speed. According to the author of the article, Anu Passary, this will give Minneapolis the distinction of having the fastest residential connection worldwide.

This blazingly fast speed is sponsored by the Minnetonka-based company US Internet, led by CEO Joe Caldwell. And speeds like this mean that users can download movies in seconds. Let that sink in: seconds.

But wait, what about that Google Fiber stuff? Haven’t we been hearing a ton about how fast and revolutionary they’ll be?

Yes, you most likely have. But after all is said and done, Google Fiber will be clocking in at only 1 GBPS, US Internet's current top speed. They’ve also been slow to roll it out because of the time-intensive updates to infrastructure, and Google wants to make sure they absolutely nail it before going worldwide.

In similar fashion, only about 30,000 households in the city of Minneapolis will be eligible to receive this new internet from US Internet. Their mission through all of this is to make the internet service market in the US more competitive, and as a consumer of that heavily monopolized market, I’m all for it.