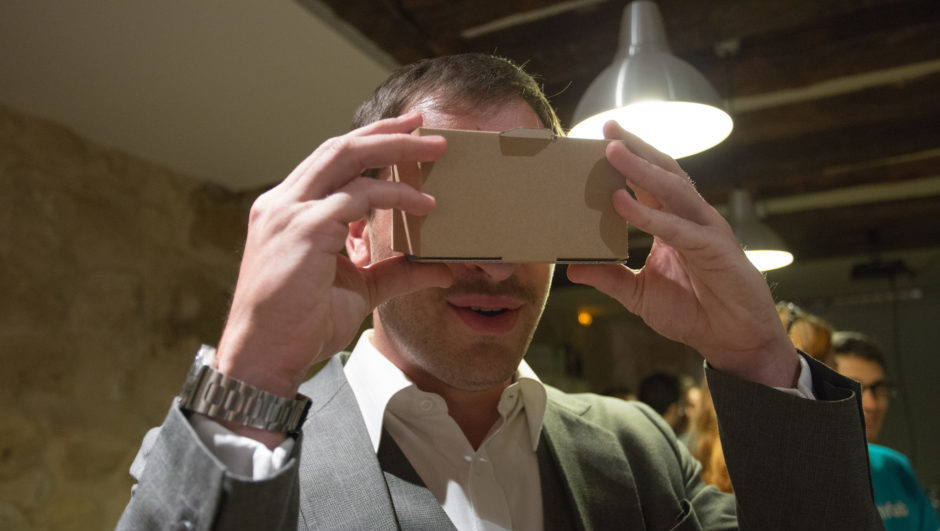 Active or passive?  What’ll it be, virtual reality enthusiasts?

But there are other energies that tech savvy dreamers can throw into the concept of VR. You can think of it as a business opportunity, a boom to get in on. As with the initial cell phone app boom, we’re at the beginning of a major era of opportunity when it comes to apps specifically for the VR boom and its technologies.

Touchstone Research tells us that the VR field can expect 171 million users by 2018, with $4.6 billion dollars in revenue expected in the industry by that time.

Now is the time when developers of apps can get into very friendly waters and be the first to make all kinds of VR apps. It just takes some imagination and a quick spin through the VR world. 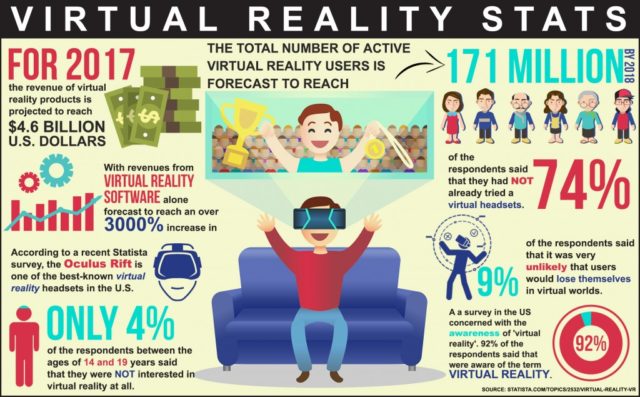 For example, a developer named Guy Godin applied VR principles to a very basic part of computing: the desktop. He is the publisher of Virtual Desktop, which uses either Oculus Rift or HTC Vive to put you in a large open space, staring up at your desktop. Essentially, this app uses your VR headset to compensate for the small size of your monitor, allowing you to watch video on a giant screen—and to do all your computing on a giant screen until you have big headset imprints on your face.

Another great example of an app for VR is Seene, which puts the user in the position of creator. Its makers wasted no time in turning the concept of VR on its side and bringing it up to speed with the age. In 2016, everyone wants to author or share material. So, while all the buzz about VR emphasizes some amazing worlds that creators take you to, Seene gives you an opportunity to make your own material.  It’s an app for your camera phone that turns your photos into 3D panoramas.  Then, anyone with a VR headset can be immersed in your world.

Here’s a look at some types of apps an enterprising entrepreneur could bring alive.

One major type of app brings actual VR content to the user, often serving as a curator. Here’s an example: With.in (which was called Vrse in its infancy) is a platform devoted to socially-conscious videos, mostly documentaries, often giving stories of people in crises in wartorn or impoverished lands.

With.in produces its own content (meaning, of course, a filmmaking experience).  Filmmakers can find a unique niche in this way, building apps to showcase their work in this new format. And app builders may be able to employ the services of filmmakers.

But in terms of app building and not content creation, per se, there’s something further one can take from With.in. One of their films is called Walking New York and was produced in conjunction with The New York Times Magazine. So, an app developer could find a business who’d like to add one quick piece of VR to its website—a boutique or microbrewery might want a virtual tour or a news organization might want VR video to accompany their stories instead of the standard kind. With someone to pay you to produce the videos you can have them made professionally and distribute them via your app, which brings the movies to VR life with whatever headsets or phone apps you choose.

In general, it’s very possible to provide the VR technology and partner with musicians, producers of live shows, etc., who will supply the content.

Taking cues from other industries, an app developer could cash in by giving users a way to work with content. This may be along the lines of finding and organizing VR material, inserting one’s own photos or videos into pre-made content (“look, I’m playing guitar onstage with U2!”), mashing up material from various pieces of content, etc.  The limit, to use a cliché, is your imagination.

There are apps for changing the text on web pages or putting it all in a neat reading pane. There are apps to augment and customize anything you could possibly work with on your computer. It isn’t hard to see how the VR world opens the door for apps that work with the way a user consumes the content, how it appears to her, etc.

For example, M-Gate labs produces an app called Mobile Station VR.  It allows users to customize how they view VR media through their headset.  A user who loads a movie into the headset can watch it hanging loose on a floating screen or steady in its rectangle in a virtual theater.  You can layer content over other content, and apply many other settings to tailor your experience.

This provides an example for any number of modifications to any category of BR experience—if users express a problem or limitation with gaming or movie watching, get with your coder and fix the problem.

Be Ahead of the Curve

You don’t have to be a PhD in economics or marketing to know that products will always gain a huge advantage by entering a new and emerging field.  It becomes easy to be the first of your kind this way, and you can capitalize on a demand for ways to explore virtual reality, while little supply exists.

When one takes into account that there are many commercial uses for VR, such as manufacturing and healthcare, one’s options for developing apps widen greatly.  What you create need not be for a home user’s entertainment, but for any number of professional uses.

Of the coming flurry of apps in the VR field, Entrepreneur.com’s Neil Petch says:

“Naturally there will be plenty of trial and error as new applications hit the market and consumers get used to what is likely to be a rapidly evolving technology…”.

There’s no doubt that making it through that winnowing phase and coming out the champion is a worthy goal.  But there’s a lot of money to be made just by entering this trial and error phase, beating a lot of entrepreneurs to the punch.

Entrepreneur & marketing consultant to over 650 businesses. Specializing in conversions and online traffic generation.