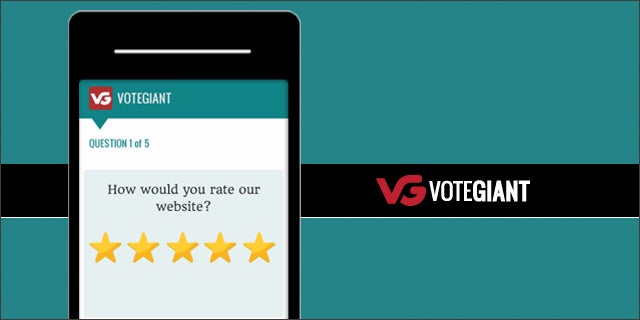 Talk about writing under pressure. VoteGiant, a mobile survey solution that was designed to collect immediate feedback at or during an event, has constructed a survey ballot for all of you readers to evaluate this very article.

Brandi Scharrer, CEO, and the rest of the team at VoteGiant conducted extensive research into the current world of online surveys, and their results were not promising. They found a major lack of survey responses, a multitude of inaccurate responses, low survey completion rates, and poorly worded questions.

“For the most part, people building surveys are not professional survey writers,” says Scharrer. “The resulting errors can really skew the results and force companies to make decisions based on bad data.”

So, VoteGiant focuses on significantly increasing the completion rate of surveys while delivering actionable and accurate results to their clients. The actual surveys, or ballots, are optimized for mobile devices, take less than a minute to complete, and only consists of five questions, max.

“We began as a social network which would allow you to vote thumbs up or down on any topic you could think of, which morphed into a visual desktop customer feedback tool as we looked to find a viable business model,” explains Scharrer. “We knew mobile was where we needed to be, and the final straw was attending multiple conferences where feedback was being collected on paper.”

Pivoting brought VoteGiant to settle on specifically targeting conferences, festivals, speeches, online education, special events, and nonprofit organizations.  Typically, with these types of events, attendees are sent a longwinded survey when they return home; they may have forgotten the finer details, though.

VoteGiant provides an opportunity to get feedback immediately following one event, by reaching out to attendees via their smartphones. The team firmly believes that is the time when the experience is top of mind for the audience, and the feedback is most valuable and most accurate.

“There is no doubt we went mobile because smartphones are such an integral part of daily life now for a majority of people around the world,” says Scharrer. “And with the popularity of social networks, such as Twitter, it appears people are more inclined than ever to openly share their opinions.”

While they remain prioritized for mobile, VoteGiant promises not to exclude desktop users. They remain adamant about mobile, though, because the surge in wearable technology, like the iWatch, Google Glass, and Galaxy Smartwatch, are beautifully suited for their platform.

The road ahead might not be the smoothest one, since they are bootstrapping all of their funding, but they have taken incredible strides to actively market their platform. Recently, the call was made to provide VoteGiant free for life to all 501 (C)(3) nonprofits.

Additionally, they were hired to be the rating system for presenters at the Las Vegas Internet Marketing Association’s upcoming Digital Planning Day event. So keep your eyes trained on VoteGiant as they continue to flourish, and remember to take the survey about my article: just don’t be too harsh!