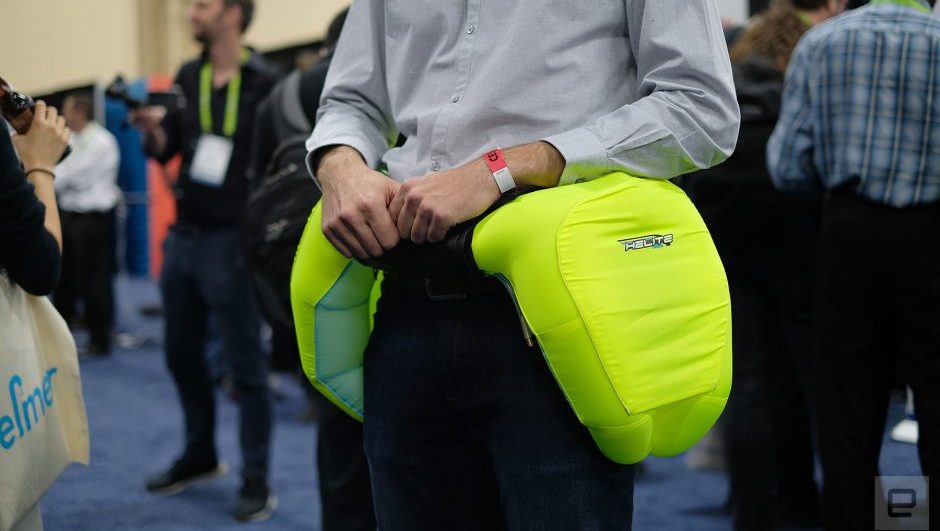 Technology, at its core, is pretty weird. Because most new gadgets and gizmos are designed to do something that's never been done before, inventors purposefully try to think outside of the box in hopes of revolutionizing an industry, making a difference, or even changing the world. However, when you're aiming for the weird, a lot of crazy technology can come out, leading to a bevy of entertaining gadgets that look like they came straight out of a Black Mirror episode. And there isn't a tech conference on the planet more prone to weird gadgets than CES.

Fortunately, what debuts at CES doesn't stay at CES. With the annual trade show coming to a close, we felt it necessary to cover all the weird gadgets that came out of Las Vegas this year. From smart toilets to robot strippers, CES continues to be the breeding ground for other-worldly technology solving problems that no one knew they had.

Take a look at the wacky gadgets we found below and start planning your trip to Las Vegas next year for CES 2019!

The worst part about attending CES is that you have to leave your adorable dogs at home, as pets aren't permitted on the trade show floor. But for those dog lovers out there, there is an alternative.

Sony's new Aibo robot dog has seen a serious upgrade at CES, sporting a sleek, lifelike design and more personality than your dog at home. Between identifying family members and doing tricks, this little guy is the canine companion you've been looking for. Plus, with sophisticated sensors and an impressive AI leading the pack, Aibo can map your home environment and find his charger all on his own. And with a price tag of $1,760, it's no more expensive than a pure breed golden retriever. Seriously.

Being a disc jockey takes a lot more than rhythm and a love of music. With all the gear it takes to get your career off the ground, aspiring DJs could be looking at huge costs, in addition to giving up a corner of your home to a couple of turntables. Fortunately, CES has provided another way.

Got a late night demo of #electronauts from @Survios last night. Wow. This reminds me of #ProTools in VR. So cool. #music #VR (Thanks Hunter for the demo!) #CES2018 #CES pic.twitter.com/D0Q3rvSbu4

Step into a virtual reality experience designed to help you create music with Electronauts from Survios. Whether you're an experienced mixer or a first-time music enthusiast, you'll be able to spin and mix EDM, hip-hop, and even your personal music into a unique creation all your own.

We all know the dangers of walking around a tech conference. From rogue drones to over-served attendees, there are plenty of opportunities to end up in the hospital with a concussion, or worse, a broken hip. Luckily, there's a handy dandy, not nerdy at all solution to your paranoid woes. 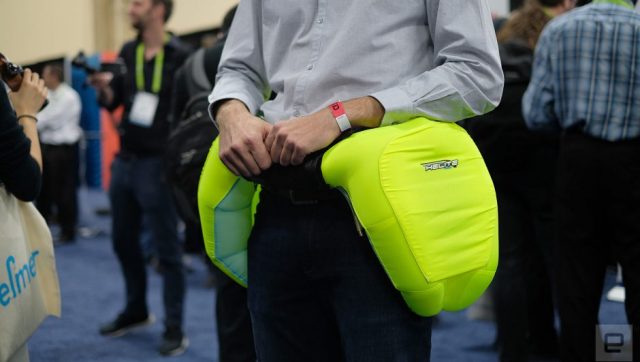 The Hip'Air, a personal airbag for your hips from French company Helite, has been spotted around CES and, while it looks ridiculous, does serve a necessary and important purpose: protecting seniors from serious injury. While the AARP doesn't have a strong presence at CES, these $790 gadgets could seriously improve the quality of life for the elderly in years to come.

In the season finale of the popular NBC sitcom 30 Rock, Jack Donaghy brilliantly comes up with an idea for a dishwasher with clear walls, designed to allow the user to watch as the dishes are cleaned in front of their very eyes. Now, more than half a decade later, life has finally imitated art. 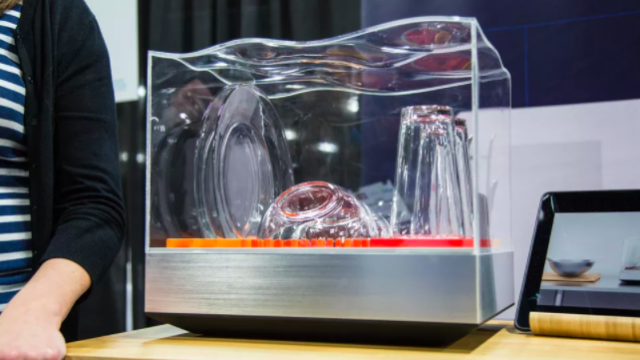 The ingenious idea was put into action thanks to Heatworks, a South Carolina-based company famous for their tankless electric water heaters. The Tetra, pictured above, is a counter-top dishwasher with clear walls so you can see your plates, bowls, and glasses get clean before your very eyes! Sure, it's kind of small, but with a price tag of only $299, it's much cheaper than a typical model. We'll take it!

After Toyota announced the development of self-driving pizza delivery and ecommerce vehicles, CES attendees were on the edge of their seat thinking about what could come next. Unfortunately, they were a bit disappointed. 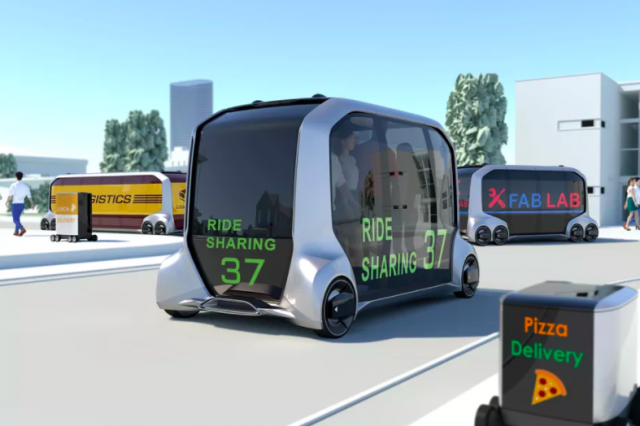 While the phrase “all-electric, driverless shuttle” sounds pretty cool, people around the world were quick to point out that Toyota had basically just reinvented the bus. It is, however, a bus with some pretty sweet features, including self-driving technology and a sleek design.

It's been said for centuries: robots are going to take over the world. Whether it's by taking all the pizza-delivery jobs or replacing our brains with virtual assistants, the fear of technology has been largely based on intangible fears. That is, until now.

With the best name for a punching robot ever and easily one of the most dramatic demo videos in the history of technology, Moorebot ZEUS is a lean, mean, robot punching machine. With technique like Ali and a hook like Tyson, this Pilot Labs creation has been scaring more than just attendees at CES.

In recent years, augmented reality has gotten pretty awesome. The medium has seen an explosion in popularity that is making people want to more tech and fast. And while no one has put together a good video game gun since Duck Hunt, you'll find a suitable upgrade in Las Vegas, guaranteed.

This Nerf-like gun from Merge VR attaches to your compatible smartphone and gives you the power to aim and shoot in a few incredible mobile games, most of which are designed on Apple's ARKit platform. Dubbed the “6DoF Blaster,” you can play everything from Laser Tag to first-person shooters with an immersive feeling like never before.

Self-driving cars have been on the road for a few years in a testing capacity. But while car companies around the world try to hack the potentially world-changing technology, Uber and Bell Helicopters have decided that land travel is so last year. 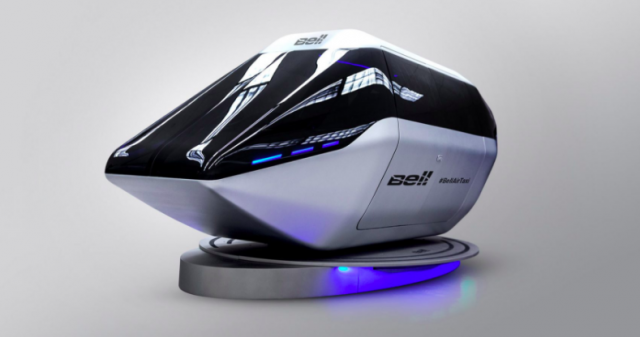 At CES 2018, Bell Helicopter showcased the cabin for their upcoming self-driving air taxi. While a lot of the details of the project remain under wraps, likely due to NASA's involvement, they do plan on having a system in place in Los Angeles in two years time.

Study after study has shown that people love bringing their smartphones into the bathroom with them, despite how gross those studies insist it is. But what if the bathroom became one of the smartest rooms in the house? Well now, that dream is a reality. 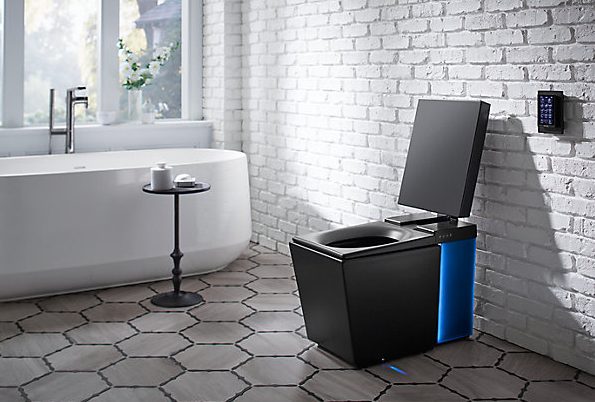 The Numi, an intelligent toilet from Kohler, is a bathroom dwellers dream. With a seat heater, foot warmer, motion sensor flush, colored lights, and music capabilities, this incredible crapper will change the way you excuse yourself from a party. Although, with a price tag of $6,300, you might be better off sticking with the ol' porcelain beauty.

Las Vegas is, admittedly, home to some pretty unsavory elements of society. From all-night gambling to all-you-can-eat buffets, stomping ground of CES didn't get the nickname “Sin City” for nothing. However, there are lines that even Las Vegas shouldn't cross, particularly at a tech conference. That line is robot strippers. 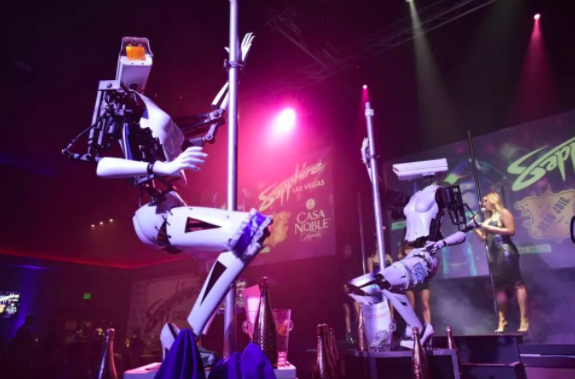 While the robo-erotic display did prove that we've come a long way in being able to make robots move like humans, it also proved that humans have a long way to go when it comes to logic and common decency. Although it happened at Sapphire, one of Las Vegas' most popular gentlemen's clubs, the stunt was completely unaffiliated with CES. It does, however, close out this list perfectly though, as it's important to remember that developing weird gadgets and technology is only valuable when you do it for a purpose other than being as tone-deaf as humanly possible.

Read more about CES on TechCo