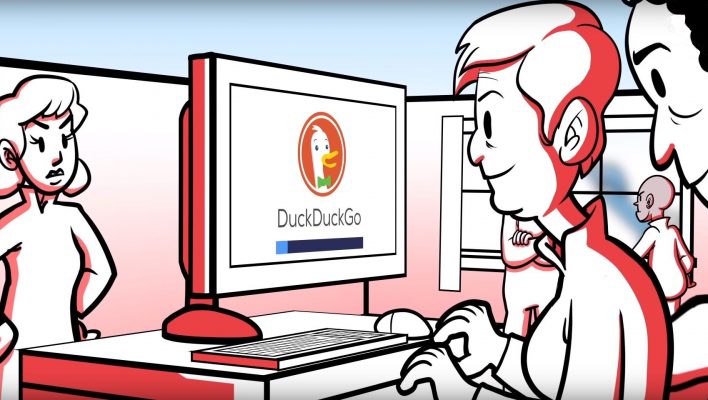 DuckDuckGo's successful bid to become a default search engine on all new Android phones in Europe has recently made tech news headlines. Not only that, but the number of queries made through this relatively young search engine grew by almost 50% in the second half of 2019.

So why is DuckDuckGo steadily climbing the search engine ranks? Well…despite Google holding over 62% of the browser market share worldwide, there’s one thing that users are starting to get fed up with – a lack of privacy.

Thanks to a not-so-tasty tech treat called a cookie, Google can follow you around the web. It tracks the pages you look at, then plasters the new phone you briefly admired during your lunch break all over website ad spaces. DuckDuckGo however, is a lot more privacy-focused, which could explain its growing success.

Google isn't the first to fall foul of the EU on these rules. In 2013, Microsoft was fined $731 million for promoting Windows Explorer over other browsers.

The upshot of last year's ruling is that as of March 2020, Android devices in the EU must offer users a selection of search engines to choose from, rather than Google. One of these is DuckDuckGo.

What is DuckDuckGo Used For?

DuckDuckGo is used by those who want to keep their search data to themselves. This means it doesn’t:

It can be used for mobile and desktop searches, and it’s also available as a Chrome plugin.

Its website states that the DuckDuckGo plugin will “block hidden trackers and encrypt connections to keep you more private”. So you can even search in private with the Chrome UX you’re used to.

There’s one small downside to this, though. And that’s how it works.

How Does DuckDuckGo Work?

Google is constantly collecting search data – it’s one of the reasons why it’s so successful at recognizing what you’re searching for, even when you’re not entirely sure yourself.

Because DuckDuckGo doesn’t have heaps of data from which to draw the most relevant search results, users say it needs a bit more ‘hand-holding’ when it comes to answering vague queries.

It means you’re best using DuckDuckGo for simple, everyday queries – such as ‘what is DuckDuckGo?’ or ‘Mount Rainier National Park’. 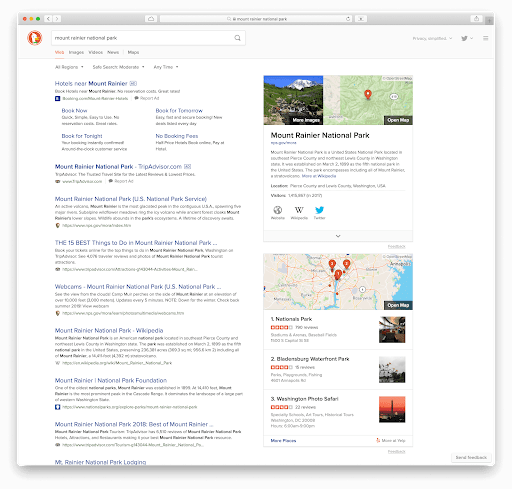 Can You Use DuckDuckGo as a VPN?

DuckDuckGo isn’t a VPN. It doesn’t create a virtual private network, nor does it protect your IP address, therefore you won’t be able to use it to do things like:

But with the VPN market expected to grow from $27.1bn to $35.73bn in just two years, it’s evident that more people are becoming conscious of the data crumbs they leave around when they’re surfing the web.

In actual fact, 31% of VPN users say they use a VPN to remain anonymous while browsing. And with the most secure VPNs costing from around $2 to $8 a month, why splash out when you don’t need to?

DuckDuckGo is a simple way to anonymously surf the web without the need for a VPN.

Can You Use DuckDuckGo With a VPN?

All search engines will allow you to use a VPN while browsing. In fact, some search engines even have a VPN built in – but not so for DuckDuckGo. For built in VPNs, Opera is a good choice for light use.

However, DuckDuckGo does go as far as dishing out the details on the VPN provider it uses in house. According to its blog, TorGuard is the VPN of choice for its tech team. Why not check out our full TorGuard review to see what all the fuss is about?

Verdict – Should You Use DuckDuckGo?

Our thoughts? Yes. Definitely, if you’re looking to gain some privacy when you’re trawling through the internet.

DuckDuckGo is a perfectly good search engine for every day browsing. Just bear in mind that some search results won’t be as data-driven as the ones selected by Google, so you might need to do a bit more legwork to get the results you want.

The number of searches made through DuckDuckGo is rapidly increasing, and with VPN usage on the rise, too, it seems that more and more people are being mindful of their personal data.

Aimee has been writing about the world of business and consumer tech for over three years. When she's not guiding readers to the right product or service for their needs, she's writing articles that help startup businesses find their feet.