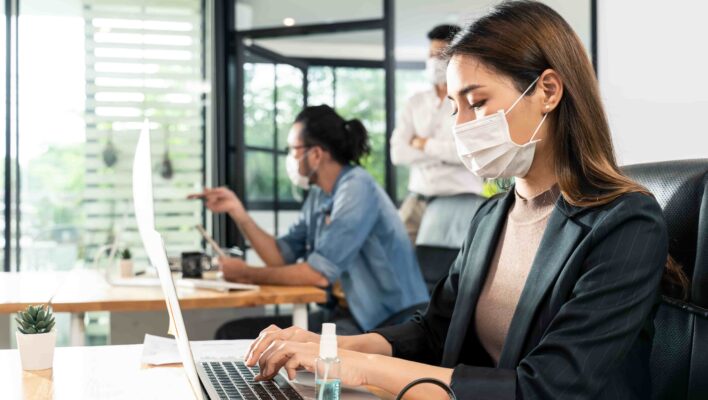 Despite the pandemic feeling like an increasingly distant memory for many in the US and Europe, one in four workers are worried about catching the virus at work.

Thanks to video conferencing software, millions were able to collaborate from the safety of their homes as Covid raged on – but now, more and more companies are demanding employees be in the office at least one day a week.

Businesses should be aware that staff anxieties may persist well into the future, even as case numbers continue to fall.

Despite few to no restrictions remaining across the country, a recent Gallup poll shows that one in four employed adults in the US still say they are “very” (6%) or “moderately” (20%) concerned about being exposed to the coronavirus at work.

A third of people are currently “not too concerned” about Covid in the workplace, while 41% are “not concerned at all.”

The figure of 26% of workers being concerned about Covid released just this week is actually slightly down on the 33% figure Gallup recorded in July 2022.

A year ago, this figure was 36%. The highest recorded rate Gallup ever recorded was in July 2020, when 51% of employees responded that they were concerned.

Some Groups are More Concerned Than Others

Gallup says that concerns about catching Covid at work continue “to be more pronounced among women, Democrats, education workers, and healthcare workers, than it is among their counterparts”, despite an overall decline in all groups.

However, Democrat concern has plummeted since July, falling 13 percentage points to just 38%, as it has among those working in the education sector, with concern dropping from 53% to 40%.

There was no change among employees that consider themselves politically independent (which has stayed constant at 26%), while there has been a small change among republicans, with only 9% concerned (down 5 points).

Give Employees a Say When Working Out Arrangements

It can be tempting, especially if your company’s employees have nestled nicely into a groove of flexible working, to just let employees come in whenever they want, or not at all for that matter.

However, it can be pretty frustrating commuting all the way into the office, only to find that the colleagues you wanted to spend time and collaborate with have decided to stay at home – even if you can still contact them on Zoom or another video conferencing service.

There can be benefits to instituting a “team day” or a minimum amount of days employees are expected to be in the office. The poll results show, however, that it’s likely some staff may have Covid-related concerns with coming in.

It’s crucial to involve your staff in the planning of such “team days” and delegate it to department or team managers if you’re part of a larger business.

Many staff worried about Covid will have very genuine concerns, many of which will likely be based on medical issues – but there is an array of other working arrangement worries they may want to voice – and they’ll appreciate you giving them the time to do so.

There’s a way to create a system that works for everyone, and ensure staff are benefitting from your office space while feeling safe and happy.