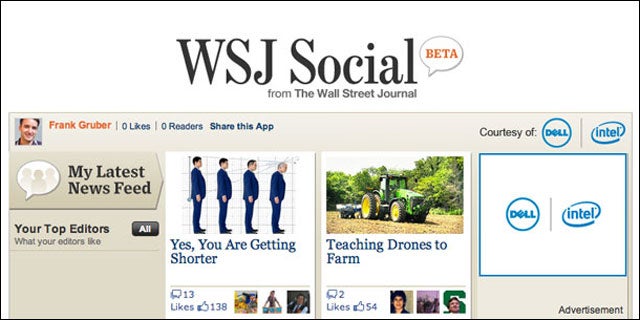 Yesterday, the Wall Street Journal launched a standalone news product built entirely on Facebook. The new product, called WSJ Social, leverages the Facebook sharing to compile the most popular and relevant WSJ news based for you based on your social network. WSJ has decided to “fish where the fish are,” and leverage the popular social network as a distribution network for Wall Street Journal content.

According  to a recent blog post by Maya Baratz, the WSJ's head of new products, shared that research lead to development of WSJ Social stating:

“With over 700M+ users, Facebook has evolved into a news distribution platform. That’s not surprising, considering that people spend nearly 10x more time on social networks (and blogs) than on “current events and global news.” Increasingly, people get their news off of social networks, and Facebook, with its seasoned app platform, is a ready canvas for crafting compelling news consumption experiences.”

With WSJ Social, every user is an editor and can influence the news that appears on the homepage. There is also a competitive element, as every editor will be ranked by number of readers (i.e., by other users who have added them). The top 3 editors are highlighted right in the editor bar that appears on every page, so there are perks for sharing your news perspective via Facebook.

WSJ Social is an interesting social news experiment, as it merges the social aspect of news into the world's most popular social network. The only thing I found to be limiting was that the app appears to only display content liked by others on Facebook or on the Wall Street Journal site. But it also means you can get access to some free version of the Wall Street Journal via Facebook.

Give WSJ Social a try and let us know what you think in the comments section below.