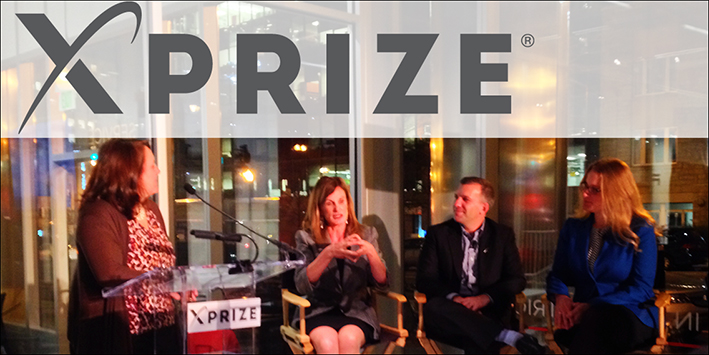 At an event last Wednesday at Tesla Motors in downtown DC, the X Prize Foundation held a panel discussion on the role of incentivized prize competitions on American innovation. It talked about how the private sector and government can work together to encourage innovators to solve the world's greatest challenges.

Most are probably familiar with XPRIZE through the Google Lunar XPRIZE, but the foundation is responsible for a slew of other prizes that are aimed at creating innovative technologies to solve big issues. The XPRIZE Foundation aims to solve the world's “grand challenges” in the categories of 1) energy and environment, 2) exploration (ocean and deep space), 3) global development, 4) learning, and 5) life sciences. It does this by creating and managing high-profile, large-scale, incentivized prize competitions that aim to stimulate investment in research and development. According to XPRIZE president Bob Weiss, a well-designed and appropriately incentivized competition can bring real change and make a difference in the world – which is why XPRIZE is working arduously in DC to encourage dialogue on the processes and best practices for such competitions and how the government can implement similar initiatives.

Primarily, the event last Wednesday was a way for the organization to educate the public on how XPRIZE is working with the federal government to utilize these types of prizes and challenges. Here's what you need to know about these incentivized prize competitions, and why they're necessary for encouraging innovation:

It's Competition That Encourages Collaboration

According to Chris Frangione, while each XPRIZE is certainly a competition, it's a different dynamic because every challenge is essentially about changing the world. “Everybody has a fundamental urge to compete as well as to collaborate…in terms of the prize, people see the opportunity to compete in something, and in doing something to change the world for the better,” said Frangione. There is more to gain as a society when all the competing teams collaborate to design the best possible solutions.

The Obama Administration Has Been Offering Prizes Since 2009

Since 2009, President Obama has called on federal agencies to utilize prizes as a way to promote innovation; however, Dorgelo admits that prizes are still a relatively new tool and haven't yet gained the traction that they could. That said, more than 260 challenges have been run through the federal government, with more than 50 agencies offering technical, scientific, ideation, and creative competitions. For Sullivan and the USAID, these challenges are some of the most successful programs they operate across 80 different countries/missions. This entire collection of federal challenge and prize competitions can be found on Challenge.gov.

Anything is prize-worthy, but when it comes to creating the most successful prizes, organizations need to focus on markets that really haven't changed recently. “[When designing these prizes], focus on where the market is stuck and where there is clear market failure or error…[where] the market is stuck because people didn't believe it could happen or no one's putting capital into it,” said Frangione. So, in the case of space travel, it was a field that NASA dominated and people couldn't believe that an independent party could actually find a better, cheaper way to go into orbit. This mindset changed once the Ansari XPRIZE was launched; then, people started to believe that such a thing was possible.

When federal agencies run these challenges, they can actually run them with both private and philanthropic partners. These partnerships give competitors access to a wider variety of resources, and remove any limitations they otherwise would encounter if a particular prize or challenge were run solely through a private organization (for instance, they could gain access to special test facilities under the government). Such greater independence also enables teams to work with third parties and scale their ideas.

Prizes Enable Outside Innovators to Solve These Grand Challenges

The most important benefit of offering XPRIZEs and similar prizes is that they allow for outside innovators to provide solutions to traditionally industry-specific problems. “These are people you would never invest in when you give a grant or a contract, but they're still doing amazing work – you wouldn't even be able to find them except through [these] prize offerings,” said Frangione. For a particular challenge, in which NASA asked teams to map dark matter, the best solutions actually came from glaciologists and handwriting analysts (obviously people not involved whatsoever in astronomy). “That really embodies the spirit of these prizes, and that unusual solutions can come from the edges,” added Dorgelo.