This content has not been updated since July 31, 2020. For more recent tech advice for your business, why not try our guide to the best fitbit for you?

Facebook’s latest VR headset, the Oculus Quest, offers a complete, out of the box VR platform that doesn’t require a separate PC or games console. Even more impressively, there isn’t a single wire in sight. At $400, will the Oculus Quest be the big, accessible breakthrough moment that VR needs so badly? We think so.

What's Great About the Oculus Quest

One of the Quest VR’s main selling points is its total lack of wires. This isn’t the first VR headset to pull off this trick – it’s not even the first Oculus headset that has done it (that honor goes to the 2018 Go). 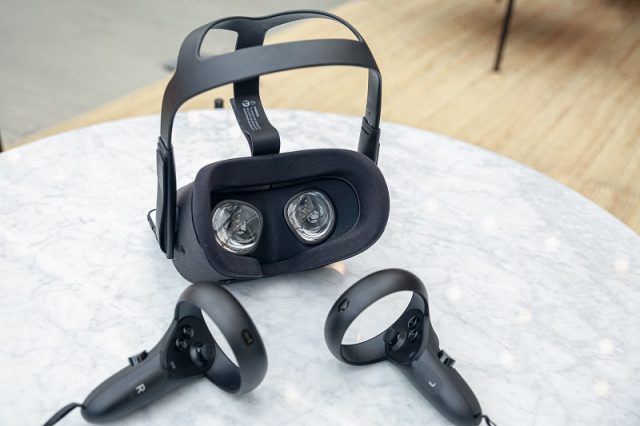 But, the Quest is the first VR headset to offer both power and portability in the same package. While the Go is aimed at the more casual crowd, the Quest is pitched as a real contender for the gaming VR crown.

That’s a hotly contested title in 2019, going up against the HTC Vive, Playstation’s PSVR, and newcomer, Valve’s Index.

The Joy of Wireless

As anyone who has used VR before will tell you, wires will quickly tear a hole in the gossamer thin illusion of VR, and take you out of the experience entirely (ditto banging your knee on the coffee table – more on that later).

The Quest does away with wires entirely (ok, you’ll need one to charge it, but that’s it), making it both arguably more accessible and immersive than other headsets. Of course, you also don’t need a separate games console or beefy gaming PC to use it. Everything you need to get started is in the box.

Setting Your Field of Play

One of the issues with VR is that it’s pretty anti-social. A headset is effectively a miniature sensory deprivation chamber, and it won’t take long in the virtual world before you lose all sense of your real world location. The Quest tackles this by having the user draw a playing space with the Oculus touch controllers before they start, effectively marking out a clear space that won’t see you fall victim to a solid bit of furniture when you’re in the throes of gaming.

It does this by employing the cameras mounted on the headset, giving you a peep at the real world while you’re ensconced in your VR world, with its ‘Guardian’ tool. Once you’ve set your parameters, the real world fades away, and it’s back to the Quest interface.

Should you venture outside of the space you’ve allocated yourself, the cameras switch back automatically, so you can see where you are and get back to the play zone again. It’s a nice approach to tackling one of VR’s more unique problems, and it could save you a few nasty bruises

Audio is handled by the Quest by speakers that are built into the headset, although naturally you can add your own headphones. It’s surprisingly effective, with plenty of volume, some bass, and it’s directional too. Turn your head to the left, and the sound that’s in front of you in the virtual space will be much louder in your right ear.

While some headsets rely on the speaker on a display/TV (such as PSVR), this can mean the sound feels slightly distant unless you opt for headphones. The Quest’s audio is another tick for this ‘all-in-one’ solution. 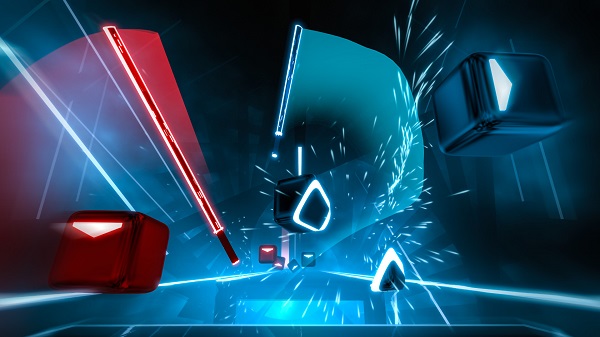 In terms of software, there’s a lot of heavy-hitters here. Titles like Beat Saber, I Expect You to Die, Super Hot and Job Simulator are all here, and rightfully occupy the top spots in the Quest’s top selling chart.

These are the games that will win over the unconvinced, especially on the ‘pick up and play’ Quest.

In terms of exclusives, the Quest has some, but they’re not quite as impressive as what Sony’s been offering with PSVR. Even use of the Star Wars licence, with Vadar Immortal, doesn’t make for a system seller. Yes, being Darth Vadar is cool, but not $400 cool.

Games can be purchased from the storefront in VR, but there’s also a companion app that allows you to browse the store, change settings, and even screen mirror what’s happening on the headset.

A word on the controllers. The Quest uses the Touch controllers, and you get two of them packed in. These are exactly the same as those utilized by the pricier Rift, and they work like a dream. 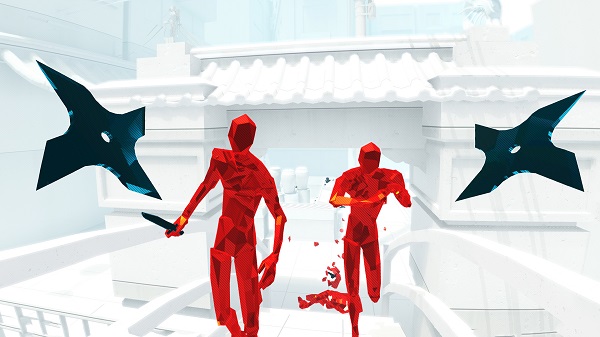 Comfortable to hold (if a little slippy after extended playing time), the controllers are lightweight and feel natural when you’re mid-game, whether you’re shooting a gun or swinging a racket. Each one runs on a single AA battery, and while some might prefer the convenience and cost-saving of rechargeable tech, we found that it will be quite a few sessions before they need replacing.

While we’re talking staying power, we found that the headset will run for two to three hours between charges – not too bad, and about as long as you'd want a VR session to last.

In terms of power, the Quest sits somewhere between the entry-level Go, and the Rift. That said, comparing it to the later isn’t truly fair, considering all the processing for the Rift is being done by whatever PC it’s hooked up to.

The headset runs on the Snapdragon 835 processor, making it much more powerful than the Go’s Snapdragon 821.

But, here’s the rub – it won’t run high end games, such as more demanding titles like Resident Evil 7 or Skyrim VR. If you want to dabble in those waters, you’ll need to invest in a gaming PC and VR headset. Still, the library shows that it can run all the ‘greatest hits’ of VR, and smoothly too.

The OLED eye panels offer 1440 x 1600 resolution, which is sharper than the PSVR’s 960 x 1080. The end result is a fairly crisp picture, although you will notice the ‘screen door’ effect at times – a natural occurrence of smushing your face up against a screen. As with all VR headsets though, this soon becomes something you get used to and don’t even notice.

If you’re a glasses wearer, the Quest comes with a spacer in the box, which can be added to the headset to give you a little more distance between the lenses and your specs, to prevent scratching. There’s yet to be a headset made that feels as comfortable with glasses as without, but the Quest is accommodating, and those with glasses shouldn’t feel excluded from the experience. 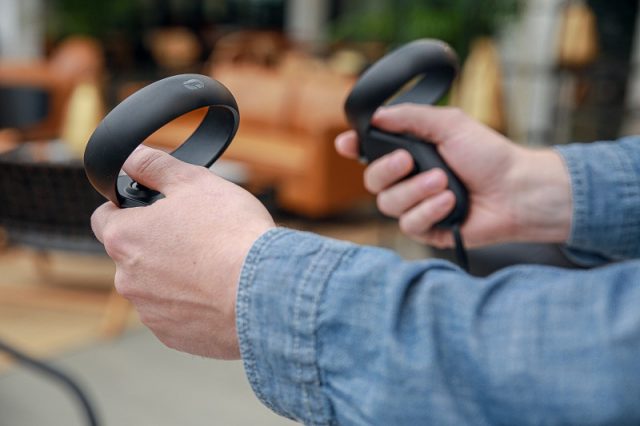 Some of the design choices for the Quest are a bit strange. The power button sits on the right side of the headset, occupying a spot near one of the velcro straps, which you’ll be adjusting as you take it on and off.

This means that on more than one occasion, we struck the switch as we got comfortable. Okay, hardly a deal breaker, but it is a small quality of life issue that seems like it could have been easily resolved during the design process.

Then there’s storage. The Quest comes in two configurations – 64GB or 128GB. In order to keep costs down, it’s understandable why storage is on the lower end, but it does mean that you could be juggling apps if you opt for the cheaper Quest.

Now, VR games tend to be refreshingly small – there’s no 100GB behemoths here like you’d find on PC or console. But, even so, it won’t take many titles to fill up the space.

Not a Fan of the Fan

Another small niggle we noticed when using the quest is that, because it’s self-contained, with all hardware in the headset itself, it has a unique problem that the PSVR, Rift or Vive don’t have – fan noise.

For most other headsets, all the processing takes place in a PC or console, positioned far away from your head. With the Quest though, in quiet moments, you can hear the fan whirring away at times, which can take you out of the VR experience (well, until the release of the much anticipated John McClane air vent simulator).

Lastly, while the future of VR isn’t necessarily games-exclusive, it’s clear that gaming is the Quest’s main focus. Yes, there’s a few ‘experiences’ available, and watching Netflix in a virtual mountainside cabin is a pleasant enough novelty.

But, if you’re not down for shooting aliens, solving puzzles, or hurling virtual balls down a bowling lane, there’s little here for you.

That being said, the Quest has clearly found its audience. Mark Zuckerberg recently stated that his company is making headsets as fast as it is selling them.

For the die hard VR fans, the Quest will probably be a case of “been there, done that”. But that’s ok, it’s not aimed at them. For everyone else, especially the uninitiated, it’s a great gateway to what VR can offer, and the lack of wires and the headsets portability make it even more compelling.

This is exactly the sort of gadget that you’ll bust out at a party, only to have your friends soon asking how much it is and where they can get one. There are few downsides with the Quest, and it’s priced fairly competitively for what you get. If you want to experience VR gaming but don’t have a dedicated gaming PC or seperate games console, the Quest is by far the best way to get your fix.