A robust CRM that embeds with Microsoft products
3.9
In Short

Microsoft doesn't need an introduction: Since the 1970s, the Microsoft powerhouse has become the typical underlying system of legacy enterprises everywhere, and at over 4.25M users, their CRM is no exception. Any Microsoft-friendly business should look to Microsoft Dynamics when adding or expanding their customer support. The Dynamics suite streamlines business operations and customer relation, is functional and remains well-priced for the industry.

What Is Microsoft Dynamics CRM?

The Microsoft Dynamics suite of cloud-based applications covers both customer relationship management (CRM) and enterprise resource planning (ERP), with the stated goal of breaking down any silos between the two types of business software to better streamline a company's processes.

If your team is steeped in Microsoft applications or needs to seamlessly bridge CRM and ERP, Microsoft Dynamics is a great CRM choice. Even so, it's worth comparing quotes on CRM software, to ensure you're getting the right deal for the scale and needs of your business – you may find a better value alternative to Microsoft Dynamics.

It's worth noting that the Dynamics user interface has been criticized by some users for a lack of intuitive design and structure: The Save button, placed on the bottom right-hand corner, can be tough to find, while the system overall can load slowly at times. In addition, the range of third-party integration is limited compared to competitors like Salesforce, though Microsoft applications including Outlook, Lync, SharePoint, OneNote, Word can all be seamlessly integrated.

ERP applications are designed to aid specific industries, including retail and finance, as well as to attract the best talent to your company through streamlined outreach and onboarding. This review largely discusses the features, support and pricing for the CRM applications below, while touching on the ERP services when relevant.

Before we dig into the nitty gritty details of Microsoft Dynamics CRM, let's compare the features and pricing plans to other competitions in the space.

Real-time predictive analytics use a customers' historical data to understand how best to help them. Once logged in, agents will view the Sales dashboard, which aggregates the latest at-a-glance business stats: Lead qualification and conversion rates, total quarterly and year-to-date revenue, and average deal size can all be kept at front-of-mind. The application's team-oriented approach allows all the sales agents at a business to track their progress and measure it against others.

Intelligent onboarding brings agents up to speed quickly with guidance tips popping up on the interface in real-time when needed. One CRM feature unique to Microsoft Dynamics, LinkedIn Sales Navigator, gives agents an access to LinkedIn's more-than-560-million-strong network from within the Dynamics Sales dashboard. This lets them reach out to leads through an introduction by a mutual connection on the social career site, or simply send a personalized message. Interested in getting Microsoft Dynamics for  your company? Use our quick, free online tool.

The Microsoft Dynamics Customer Service module allows agents to view data including open cases, resolved cases, draft emails, and activities (calls, emails or texts with customers) on its Dashboards, though a Timeline allows the data to be shown chronologically. Open a case, and you'll see additional information including a customer profile and historical data. An accounts and contacts section stores information about those you work with, and are sortable by Service Level Agreements, a metric which details the type of service each customer is authorized to receive.

When open, cases can be quickly addressed through a three-step workflow — identify, research, and resolve — that guides agents through the process quickly and lets them receive and send customers messages while never leaving the Microsoft Dynamics application.

AI chatbots within Customer Service can talk to the agents, offering relevant data about specific customers that can help agents offer the best recommendations, saving agents time and stress. Like the other modules discussed in this review, Customer Service can be access through a mobile device as well as a desktop browser.

The Project Service module helps businesses manage project-based services provided to their clients. From within this Dynamics service, agents can track a project from initial sale to final invoice. The major steps in the process include opportunity management, project planning, resource management, team collaboration, and customer billing.

The workflow process lets the entire team follow a project from a quote to a open to delivery, followed by completion and closure. To build a quote, project managers can use a drag-and-drop function to customize templates that segment a project's billable hours by task name, role, start/end date, duration, and resources. The right resources can be quickly found by searching a database by skills and availability.

The team can discuss the project using group conversations that allow them to share notes and files. Time and expenses can be easily recorded or approved, even on mobile. Since the same system tracks the entire project, an accurate invoice can easily be produced and delivered. 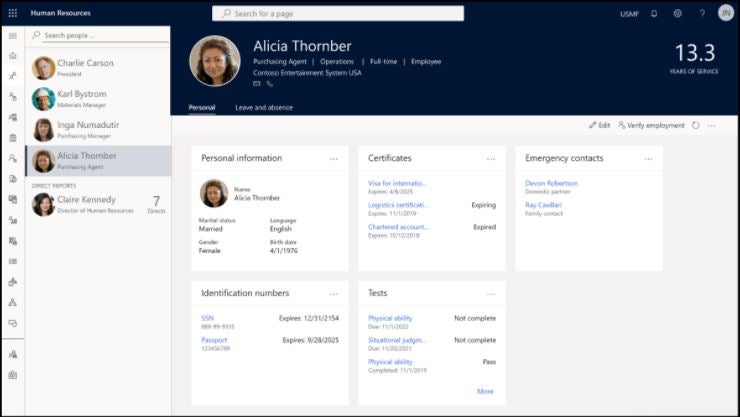 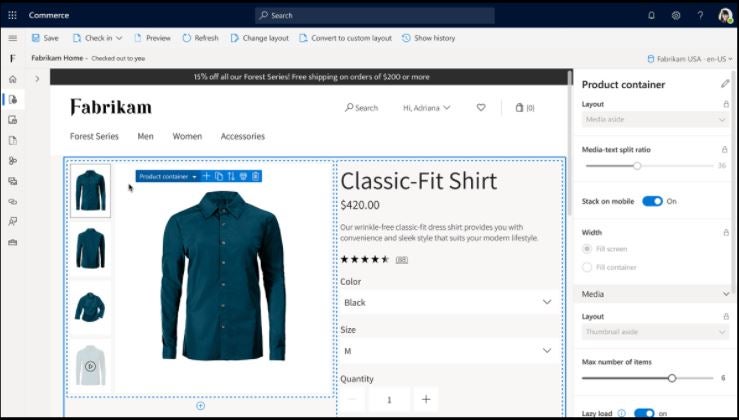 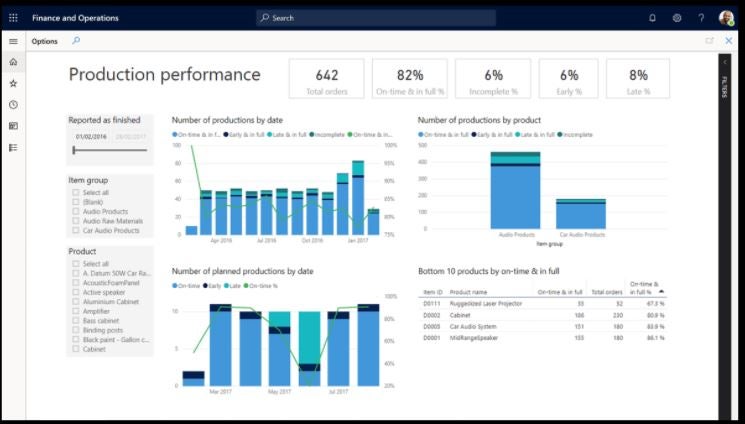 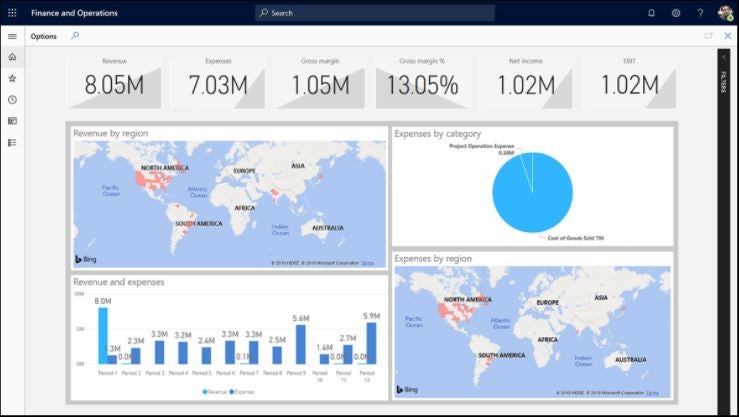 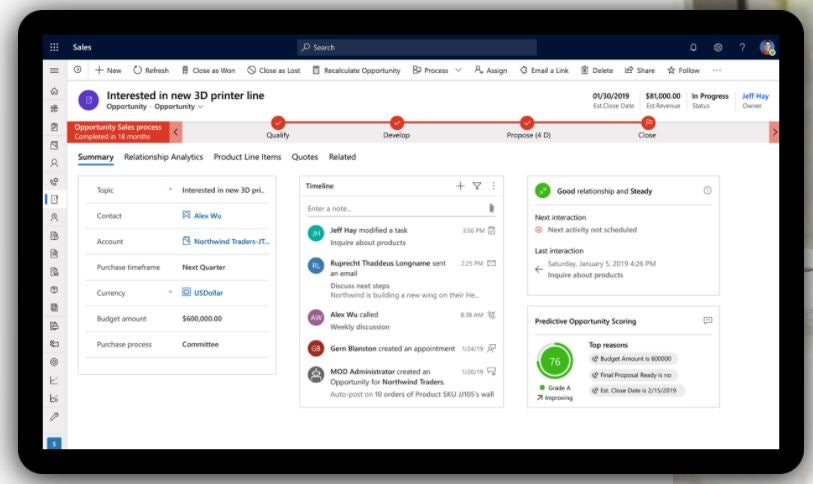 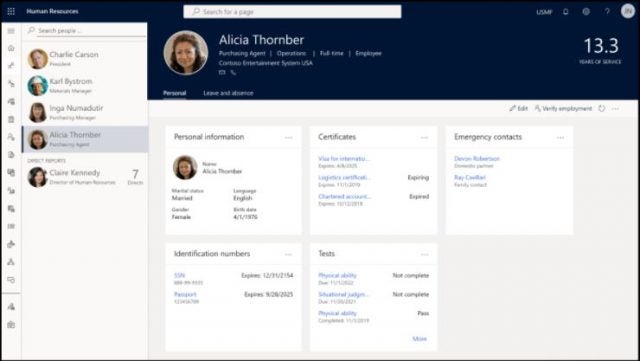 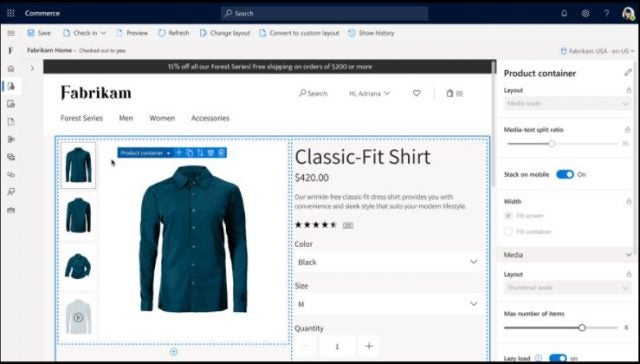 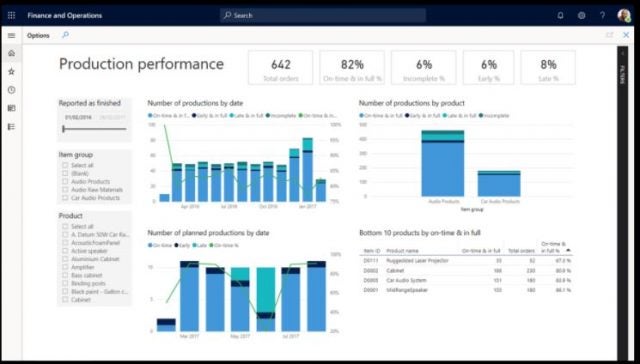 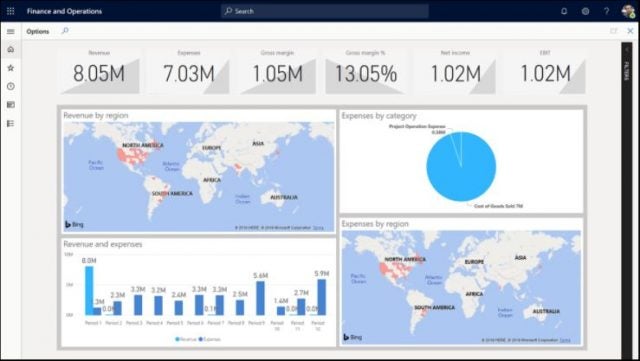 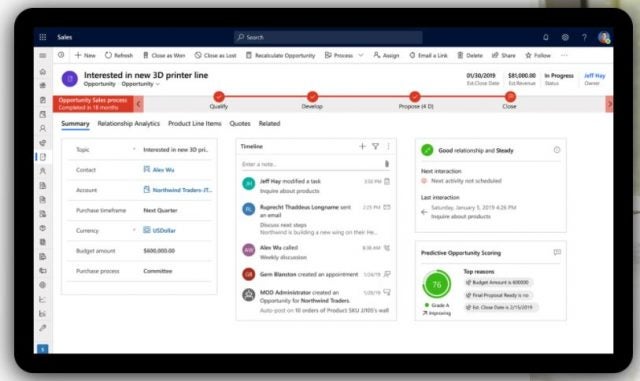 The Microsoft Dynamics Field Service module helps companies manage their on-site service business through optimized scheduling. The goal is to streamline the process, giving agents the data they need when they need it in order to address issues before they occur and ultimately cut down on operational costs.

Then, once in the field, technicians can quickly pull up all relevant customer information from within Field Service, even on mobile. Lists of accounts, contacts, bookings, work orders, customer assets, activities, and even time off requests can be easily accessed from a lefthand menu bar on the agent's dashboard alongside a map of the agent's location.

This video displays an overview of the goals behind the Microsoft Dynamics suite, explaining in their own words how the company believes the digital revolution is a transformational era that requires equally transformational technology.

The last year has been a challenging one for many companies, with a lot of traditional office-based roles being performed at home. Given this, we've seen  a huge rise in the use of teleconferencing platforms such as Zoom, Google Meet, and, of course, Microsoft Teams. It may be that your company has already invested in the Microsoft Teams eco-system, and want to know what your options are when it comes to Microsoft Dynamics integration.

Well, it's good news. As you might imagine, Microsoft Dynamics plays very nicely with Teams, although it does require this to be enabled first (Microsoft has a guide on how to do that).

So once you're up and running, what can you do? One of the most important abilities is being able to view Dynamics records by a member of a Teams channel, making it easy to share and work on records together. What's even better is that the other person doesn't even need to be Dynamics user (although if you want them to edit the record, they will need to be).

In addition, the app also allows for a dashboard view of Dynamics, again within Teams itself, showing personal dashboards for the user.  There is also a note feature that enables notes to be created on Dynamics records, directly from contributors on Teams.

There's more to – it's also possible to make direct calls from Dynamics thanks to an embedded Teams dialer, as well as video or audio Teams meetings that tie into Dynamics 365 Sales.

Microsoft has unveiled many cross-platform features for Teams and Dynamics in the last few months, reducing the need to move between platforms, instead doing everything from the one screen.

A lot of these integrations were only unveiled in the last few months, and it's fair to say that Microsoft shows no signs of slowing down – and why would they? Enabling these integrations means that employers can ensure that there is less time wasted switching between platforms, which means its win-win for companies, and Microsoft itself. We'd expect to see even more integrations coming in the near future. There's never been a better time to make Microsoft Dynamics your company's next CRM platform.

Microsoft Dynamics has a free CRM-specific online help center. In addition, 24/7 live support is available to paying customers both online and by phone. To connect with a Microsoft agent online, users will need to log into their CustomerSource portal.

The Dynamics 365 Plan gives users access to all Microsoft Dynamics CRM and ERP applications through a single package, starting at $210/user/month.

Two cheaper and less comprehensive plans are available that offer solely the CRM or ERP tools: The Customer Engagement Plan is the CRM option, for $115/user/month, The Unified Operations Plan includes the ERP options for $190/user/month.

Before you take the leap, you'll need to know exactly how much Microsoft Dynamics CRM is going to cost. Fortunately, you can get a customized price with our CRM quote tool.

Microsoft Dynamics is a suite of software tools that are designed for customer relationship management (CRM). These tools are able to integrate with other Microsoft platforms, such as Outlook, Teams and Office 365.

Many companies use Microsoft Dynamics to consolidate their marketing initiatives into one place, and communicate with their customers directly.

In our research, we've found that Microsoft Dynamics is an excellent CRM tool for most businesses, thanks to a rich feature set and its integration options. The multiple applications, such as field service, customer support, sales and so on, all under the one roof, make it an essential tool.
While Microsoft Dynamics and Salesforce are heavyweights of CRM, our research has shown that Salesforce has the slight edge, thanks to a very strong set of features and a wider range of integrations. However, Microsoft Dynamics should not be overlooked, especially if your company is already deep in the Microsoft ecosystem (which, lets face it, is likely).
Good news. Microsoft Dynamics isn't hard to learn. It's designed with a user-friendly interface that is relatively self explanatory, and if you've used a similar software package before, you won't go far wrong. Even if you haven't, you'll find plenty of support online, both directly from Microsoft, as well as forums and websites that can break down whatever issue you're experiencing.
About our links