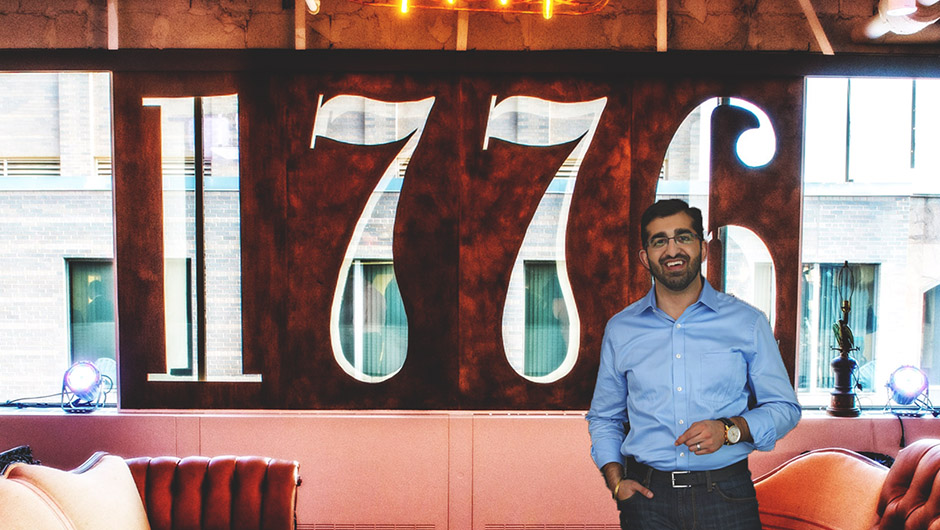 In March 2013, Paul Singh stepped down from his position as partner at 500 Startups and unveiled his new startup, Dashboard.io, which had just raised around $250,000 from DC’s NextGenAngels. Almost a year later, Disruption Corporation (the new name of Dashboard.io) announced the creation of the Crystal Tech Fund (CTF) to invest in post-seed startups (a $50 million fund, according to an SEC filing). And a year ago last week, Tech Cocktail worked with Disruption Corporation to announce and celebrate the opening of a new space for startups in Crystal City, eventually dubbed Disruption Corp Headquarters.

And the evolution continues. This week 1776, the DC-based global incubator and seed fund, is acquiring Disruption Corp (its assets and employees), taking over operations for the CTF, as well as the former Disruption Corp Headquarters which will become the new 1776 Crystal City campus. Details of the acquisition have not been disclosed publicly.

According to leadership at 1776, “Paul will be a Managing Director at 1776, and we'll continue to lean heavily on him for his leadership in developing new products and data-driven insights for our startups, corporate partners and investors.”

And regarding the 50 million dollar fund?  1776 will maintain the existing CTF portfolio, assisting the existing portfolio companies to drive scale, but moving forward will not make investments from the CTF. Instead, those investments will come from the separate 1776 Seed Fund.

From the beginning, Singh has had a unique vision for the ways in which data can transform private capital markets and has worked to develop products like Dashboard and Hubble to do exactly that. According to 1776 co-founder, Donna Harris, the synergies between Disruption Corp and where they are going as an organization, are strong. In a statement to Tech Cocktail, Harris said,

“Over the past two years we’ve been building a global network of startups and incubators who are working to impact millions of lives in entrenched industries. Working together, we can identify the companies most poised for breakout growth and then mobilize to use our collective networks to help them scale.  To do that, tools become critical to gather insights, track progress, and use all of that information to help our partners and governments help startups while simultaneously better understanding the state of innovation. At the same time, Paul and the Disruption team have  launched Dashboard and Hubble and have been working on the research, tools and platforms that can help investors understand the innovation economy landscape and use data to make better investing decisions.”

Yesterday, local DC-area media received an advisory of a press event this afternoon where Vornado, the sole LP of the Crystal Tech Fund and the driver behind the new “innovation hub” in Crystal City, along with Singh, leaders from 1776, and local officials from across the region will come together to share these announcements. Virginia Governor Terry McAuliffe and Arlington County Board Chair Mary Hynes are expected to be there as well, as they outline the details of a new partnership “to remove barriers between Maryland, Washington, D.C., and Virginia, creating a stronger regional innovation economy and new opportunities for local startups throughout the Washington Metro region—regardless of where they are located—to grow and scale.”

As an early partner in helping to shape the new innovation hub, and attract startups and the local “creative class” to Crystal City, Tech Cocktail has been proud to stand alongside other visionary groups such as Vornado, TechShop, Eastern Foundry, Disruption Corp and now, 1776, to leverage an important neighborhood in the DC community. 1776 emphasized this even more by sharing that “anyone—whether they’re a Fortune 500 company or a startup—knows that you have to be in Crystal City if you want to make an impact in these fields.”

Having been a long time resident of the DC-region (personally having lived in DC, MD and VA over the years), I, along with many others, believe that there has been far too much emphasis on the boundaries across the area. But as Evan Burfield, co-founder of 1776 shared with us,

When those startups come to Washington, they don’t differentiate between Crystal City, Bethesda or Logan Circle. But many of us who live and work here still do. These startups know, whether they’re headquartered in DC or in Tel Aviv, that from the standpoint of government and entrenched industries, the Washington metro area is where they come when they want to drive change in an industry like education, energy, health or smart cities. It’s time that all of us start viewing it the same way.

The former Disruption Corp Headquarters, now the 1776 Crystal City campus, is just steps from the Pentagon and even closer to Reagan National airport.  The space will continue to play an important role in the community, as home to startups who work from there, and to special events which serve to connect and educate startups from all over the globe. All efforts, including our own, are geared towards creating a  stronger innovation economy to help new businesses grow and prosper, creating jobs and opportunities that extend far beyond any district borders.

Disclosures: Tech Cocktail CEO Frank Gruber and COO Jen Consalvo are members of NextGenAngels, and they participated in the original Dashboard.io deal. Vornado is also a sponsor of various Tech Cocktail events in the DC area.